The Washington County Water Conservancy District (WCWCD) provides culinary, secondary, and wastewater services to nearly 200,000 people in southwestern Utah. The WCWCD’s new general manager, Zach Renstrom, is carrying on the work of his predecessor by planning to make sure that the district has reliable water supplies decades into the future. In this interview, Mr. Renstrom tells Municipal Water Leader about his work on several key initiatives: a future Lake Powell pipeline that will bring Colorado River water to the region, the construction of two new reservoirs, septic-to-sewer conversions, and conservation efforts.

Zach Renstrom: My first involvement with water came when I worked on a dairy farm as a young child. I learned there, and have never forgotten, that every single drop of water counts. I went to the University of Utah and received a degree in civil engineering with an emphasis in water resources. I also earned a law degree. I am a licensed professional engineer and am licensed with the Utah State Bar Association as an attorney. I practiced law for a little bit and then was the principal owner of an engineering firm for a while. I then decided to get involved in politics and was elected for a 4‑year term as a county commissioner. During that time, I was on the board of the WCWCD. When Ron Thompson told the board he would be retiring, we opened his position. I applied, went through the interview process, and was selected to replace Ron.

Municipal Water Leader: Please tell us about the WCWCD and its history.

We live in a geographically small area with limited water resources that were developed years ago. Developing additional water resources was going to be expensive. No one city had the financial capability to develop water projects, but collectively, they did. The water district was the vehicle by which they started developing larger water projects that would benefit all the municipalities and protect the region’s water supply.

In the early 1980s, the WCWCD started its first large project, which comprised a diversion dam, reservoir, and extensive piping. Since then, the WCWCD has continued to grow. Its infrastructure supports all the growth occurring in the county’s major population centers.

Municipal Water Leader: Are your customers the municipalities?

Zach Renstrom: The vast majority of our water is sold wholesale to the cities, although we do run several small retail sections in unincorporated areas of the county. To protect our groundwater and surface water, we also operate septic systems, a small sewer treatment plant, and a wastewater system.

Municipal Water Leader: About how many end users benefit from the water WCWCD provides?

Zach Renstrom: More than 90 percent of the county’s population is directly connected to our pipelines. Right now, we serve nearly 200,000 people.

Municipal Water Leader: What kind of infrastructure does the WCWCD currently own and operate?

Municipal Water Leader: Given the fact that you own hydro plants, do you also provide electricity?

Zach Renstrom: Yes. We sell the electricity from our two hydro plants to our local municipality, which puts the power in its grid. We generate about 10 million kilowatt-hours annually.

Municipal Water Leader: What is the current source of the district’s water, and what was the motivation behind initiating the Lake Powell pipeline project?

Zach Renstrom: We have one water source, the Virgin River basin, which is reaching its full development potential and is closed to further appropriations by the Utah state engineer. We are also the hottest, driest, and fastest-growing region in Utah. Our population is projected to more than double by 2065. Our local water resources are not sufficient to meet the projected demands of our growing population and expanding economy, particularly considering the variability of the Virgin River basin and the effects of climate change.

Since then, we have also started to face new challenges on the Virgin River. In 2020, for instance, we had some algal blooms that contaminated our sole water source. To have the opportunity to tap into a second source is valuable.

Municipal Water Leader: There is a lot of conflict on the Colorado River about water usage, but it sounds like in this case, Utah has a clear right to more water. Is that the case?

Zach Renstrom: Utah was given water rights to the Colorado River by the 1922 compact and the subsequent agreements that created the Law of the River. Even with the Lake Powell pipeline, the state will still not be using its full allocation. Other states have been using their full allocations for years and years. Utah has been more conservative in how it develops and uses the water, but the state now needs that water to accommodate its rapidly growing communities. The Law of the River allows states to develop their respective water shares whenever need arises.

Municipal Water Leader: What entities have been involved in the process of planning the Lake Powell pipeline?

Zach Renstrom: The Lake Powell pipeline has been studied by the Utah Division of Water Resources since the late 1990s. The Lake Powell Pipeline Development Act was passed in the 2006 legislative session, authorizing the State of Utah to build and finance the project. The Bureau of Reclamation is serving as the lead agency. Several other federal, state, tribal, and local agencies are involved, including the Bureau of Land Management and the National Park Service.

Municipal Water Leader: What is the current status of the project?

Zach Renstrom: We are currently in the environmental permitting process, with a supplemental draft environmental impact statement anticipated later this year, followed by a record of decision (ROD) in 2022.

Municipal Water Leader: What is the timeline for the construction and completion of the pipeline?

Zach Renstrom: After the ROD is received, we will begin design work, which will probably take 1½–2 years. We hope to break ground in about 5–6 years, and we anticipate that construction will take 3–5 years. We can accelerate that as needed, but those are the current plans.

Municipal Water Leader: What is the total amount of water you expect the pipeline to bring you when it is complete?

Zach Renstrom: Approximately 83,000 acre-feet per year when it is operating at full capacity.

Municipal Water Leader: What are the district’s other top issues today?

Zach Renstrom: We’re updating our water conservation plan to achieve a more aggressive reduction in water use. We’re studying our water supply, our use, and the effects of climate change. We’re also developing additional infrastructure. Current projects include additional well development, water treatment expansions, and a new reservoir called Toquer Reservoir. The reservoir is in the final stages of environmental permitting; we hope to start construction later this year.

Municipal Water Leader: Are you working on any septic-to-sewer conversions?

Zach Renstrom: Yes. Right now, we’re undertaking multiple studies to look at different areas of the county to see where it makes financial sense to invest in septic-to-sewer conversions. When I started my career, wastewater and drinking water were completely separate. Now, reuse water is viewed as beneficial. The public is starting to accept it. Converting the septic systems to sewer will add water to our system, so the benefits of conversions go beyond just protecting our groundwater from septic system leakage.

Municipal Water Leader: Would you tell us about the WCWCD’s conservation work?

Zach Renstrom: Conservation is a big part of the district’s mission, and it is something all our cities and elected leaders support. Our county was the first to meet the governor’s statewide water conservation goal, reducing per capita water use by more than 30 percent from 2000 to 2018. Washington County has some of the most aggressive conservation goals in the state of Utah and an extremely robust program that offers rebates for water-efficient irrigation system upgrades, appliances, and water fixtures. We also fund state and local conservation campaigns, host free community landscape workshops, train landscaping professionals, and manage two conservation demonstration gardens.

In addition, our residents are responding. The annual Parade of Homes historically featured landscapes with extensive grass. Now, those homes incorporate beautiful, water-efficient landscapes with little or no grass. It’s neat to see that change, and I think that change is occurring because we live in an area where people really do care about the environment. The majority of the citizens here love the environment, care about it, and want to enjoy it.

Municipal Water Leader: What is your vision for the future of the district?

Zach Renstrom: My vision for the district encompasses a couple of things. First, I want to continue our strong conservation habits and motivate our water users to be more efficient. I’m a strong believer in the 1 percent improvement—in other words, taking an excellent initiative and making it 1 percent better, and then 1 percent better after that. Second, I want to make sure that our water is safe and that we continue operating a reliable drinking system. If local citizens aren’t thinking about their water, then we’re doing our job. Third, I want to ensure that the infrastructure we’re building for our children and grandchildren will be beneficial for them. When the district’s first major reservoir was built in the 1980s, I was in the third grade. The previous generation built that reservoir, making it possible for me, my family, and so many others to live here today. Every prior generation in this county has made sure that the next generation has a safe, reliable water source. I want to carry on that tradition of leaving our area better than we found it.

Zach Renstrom is the general manager of the Washington County Water Conservancy District. He can be contacted at info@wcwcd.org. 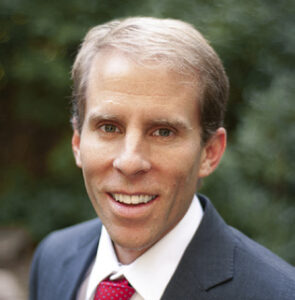