Coachella Valley Water District (CVWD) provides domestic water, sanitation, recycled water, agricultural water, storm water protection, groundwater replenishment, and water quality conservation services to 300,000 people across a 1,000‑square-mile service area in Southern California. Several years ago, CVWD decided to revamp its communications strategy, which had previously focused primarily on water conservation, to try to meaningfully improve public perceptions of the agency and to emphasize its close connections with the local community. In this interview, CVWD Director of Communications and Conservation Katie Evans tells us about the ideas behind the strategy, how it has been implemented, and its results.

Municipal Water Leader: Please tell our readers about your background and how you came to be in your current position.

Katie Evans: I have worked in the water industry since 2008, primarily in communications. I took over as CVWD’s director of communications near the end of 2017, as we were moving toward our 100th anniversary. I’m also the steering committee chair for the California Data Collaborative, which is focused not on communications, but on using water data for policy decisions. The committee was formed by a group of water agencies to try to better understand data.

Municipal Water Leader: Please tell us about how CVWD developed its Your Water Is Our Promise campaign.

Katie Evans: CVWD was founded in 1918, and until 2018, most of our outreach focused on water conservation. In 2018, we pulled back the conservation outreach and launched a 100th anniversary campaign. After that, in 2019, we saw an opportunity to refocus our efforts and use research to make our communication strategy more intentional, strategic, and effective. We hired a public opinion polling firm and did extensive customer opinion research to find out more about our customers’ attitudes, their perceptions of CVWD, which communications methods were most effective, and the strategies we might employ for improving our messaging. Our research included two focus groups, a survey in both English and Spanish, and follow-up communications.

We found out that a lot of people knew what CVWD was. About 63 percent approved of the job CVWD was doing, 7.4 percent thought we were doing a bad job, and 29.6 percent didn’t know. We were focused on the 29.6 percent who weren’t sure whether or not CVWD was doing a good job. We also learned that respondents were interested in learning more about infrastructure, particularly if we tied infrastructure to public health, general quality of life, and fire protection. A lot of customers were interested in knowing more about water quality and making sure CVWD was ensuring that their water was safe. People wanted to know more about the fact that CVWD is a nonprofit government agency, unlike some electric companies, which are for-profit companies with shareholders.

We decided that what we needed was a campaign to humanize CVWD, shifting its image away from red tape and bureaucracy and emphasizing that CVWD is part of the community. We wanted a new look, and we wanted to educate customers on all the services we provide the community. We wanted to inspire trust and confidence in our customers, and we wanted to give the district a face and a voice. We set some goals for growing our social media presence and increasing the number of people using our app, but our real goal was creating follow-up surveys and ensuring that our efforts were working.

Municipal Water Leader: What do you mean by humanizing the image of the agency?

Katie Evans: We want to humanize the district by including our employees in our ads—not stock images or general photos of pipelines. In this campaign, we feature our employees; explain their roles at CVWD; and show that they are people who live, work, and play in the Coachella Valley. They may even be familiar faces. We want our customers to see the people who are doing the work to bring them water services. My hope is that somebody will be driving down the street, see one of our billboards, and recognize the employee featured on it. That helps customers understand that the CVWD employees who provide them these services are also members of their community.

Municipal Water Leader: What are the different elements of the campaign?

Katie Evans: We are doing less traditional print advertising, because our polling showed it was not particularly effective, although we are still placing print ads on specific services in certain publications. We’ve switched over to billboards, because the Your Water Is Our Promise campaign doesn’t really need much text. One of our billboards features several guys working on an emergency pipeline repair late at night. All these guys are local Coachella Valley community members. We also did some billboards in Spanish. There are areas where the cities, rather than CVWD, provide the water service, and in those areas, we put up billboards about flood control or sanitation services. We tried to match the billboard with the services that are provided in the area.

We run radio ads based on an ask-the-expert theme. Each ad is a mock interview with an expert who lives within the community. We run television ads, which feature photos of our employees and operations and are narrated by one of our employees. We do a lot of social media. We hope that if we post a picture of an employee on our social media feeds, their families will share it with their friends. One of the best results happened when we featured a meter reader, and his girlfriend loved it and shared it with everybody on every platform. We have also started a blog and created some behind-the-scenes videos.

Municipal Water Leader: What is the desired end point of your communications strategy?

Katie Evans: The most important data point is public perception, measured via public polling. We did some public polling after the first year of the campaign and found that we had improved people’s attitudes about CVWD. We saw the approval number go up into the 70s. We haven’t done a poll since then, partly because of the COVID‑19 pandemic, but we intend to recommence public opinion polling in the near future. I feel strongly that communication strategy should be based on data. If you don’t have data points, then you should be doing research to get them, which is why we went out and did the polling.

Municipal Water Leader: How might improving the public perception of CVWD end up helping the district in the future?

Katie Evans: We think that if people support the work CVWD is doing, they’ll be more willing to support our needs. When we’re constantly showing people the work we’re doing here at CVWD and how effective it is, it’s an easier sell when we need something like a rate increase. We are conveying that we are responsible, we are doing good work, and we are providing a service to the community. We want the community to understand the work we are doing, to value us, and to trust us. Having a connection with our customers can help CVWD in the future. If we are tearing up a customer’s street to put in a pipeline, their immediate reaction might not be negative; it might be speculation about what we’re doing.

Municipal Water Leader: Did you get any unexpected results from your polling?

Katie Evans: The fact that so many people talked about fire protection threw me off. Fire protection is an important thing that water agencies do, but I was surprised to see it listed as the primary reason people were supporting water agencies. I think that response was so prominent mainly because California was experiencing major wildfires at the time.

Another important result was that many people did not know that CVWD provides seven different water-related services. We provide domestic water, sanitation, recycled water, agricultural water, storm water protection, groundwater replenishment, and water quality conservation, but people didn’t know any of that. Because of that, we were careful to ensure that our campaign included not only domestic water but storm water and nonpotable water as well.

Municipal Water Leader: Are you planning to continue this campaign for the foreseeable future?

Katie Evans: We plan to stick with it. We will probably do some polling again when the pandemic settles down. Our entire public outreach department is in limbo because of the pandemic. Before the pandemic, we did a lot of tours, events, workshops, hands-on activities, and booths. We will soon begin deciding what we want to put our resources back into.

Municipal Water Leader: Please tell us about your communications department. How many people are working on this campaign, and how much has it cost?

Katie Evans: My communications department is made up of 11 people. They all have tasks besides this campaign, but one person works on it primarily. During the first year of the campaign, everything we did, including public opinion polling, cost $160,000. That included the development of the campaign, which was expensive because of the cost of graphic arts. With those initial expenses out of the way, our annual budget is closer to $50,000. I should point out that CVWD is a huge district: We serve 300,000 people across 1,000 square miles. The cost would be dramatically reduced for a smaller district that didn’t need to do such extensive polling and didn’t need as huge an outreach program. We have outreach specialists who work on this campaign and outreach specialists who work on earned media, which is when outside news sources cover us. My department also oversees education in schools, tours, workshops, and events for students. My department also does all CVWD’s internal employee communications as well as government affairs.

Municipal Water Leader: What advice do you have for other agencies that are looking to revamp their communications strategies to make them more strategic and effective?

Katie Evans: I would say start with data. If you don’t have the budget to hire a public opinion polling group like we did, at least do surveys that you e-mail out to customers or put on your social media. Start with data about what your customers think, what they misunderstand, and how they want to be talked to.

Municipal Water Leader: What is your vision for the future of CVWD?

Katie Evans: One of the wonderful things about CVWD is that our general manager is always telling us to stop and break the that’s-the-way-we’ve-always-done-it mentality. He wants to see us innovate, and I agree. My vision for CVWD is for it to take risks, try new things, and see if there’s a better way to do things. There’s a lot of value, especially as the world is changing, in approaching things with fresh eyes and being ready to try things differently.

Katie Evans is the director of communications and conservation at the Coachella Valley Water District. She can be contacted at kevans@cvwd.org or (760) 625‑8925. 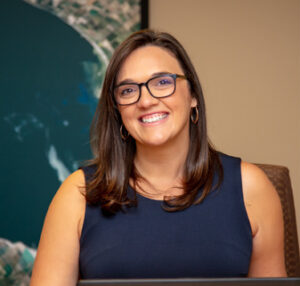 Infrastructure Planning for the Next Century at the Salt River Project