Few people have generated more stories or created lasting memories like Mr. Dave Luker. He was simply a bigger-than-life guy who always did his best and expected others to do the same. He touched many lives in very positive ways. He is missed by all who knew him. Below is the column I wrote when he was on the cover of the January 2016 issue of Municipal Water Leader.

The Highest of Standards

This issue of Municipal Water Leader features Desert Water Agency (DWA) General Manager Dave Luker of Palm Springs, California, on the cover and as our primary interview. I have known Dave for several years and regard him as one of the most accomplished and capable managers I know. 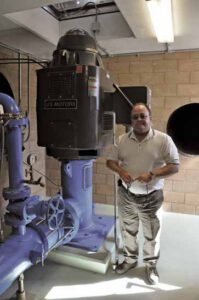 “Every facility we have is ready and in shape to be seen.” That was Dave’s response when I commented on the cleanliness and organization of a pumping plant on one of my earliest visits to DWA. Dave went on to explain that DWA’s previous manager and his former boss, Jack Oberle, had set that standard years ago. “On the rare occasions I do see something out of place, our people get right on it. That is how we do our business,” Dave continued.

I have toured DWA’s facilities many times since then, and I am always impressed by the attention to detail, organization, and exceptional cleanliness of everything. The control rooms, pumping plants, and agency buildings are meticulously painted and very clean. There are no oil leaks, spare parts, tools, or clutter of any kind lying around. Walking through the DWA shop area, one observes the labels of various spray cans and other supplies all facing forward and in precise, straight lines. Everything is in its designated space. All the DWA vehicles are in excellent repair, have gleaming paint jobs, and are parked with military precision.

When one comments on such things, Dave is quick to reference his former manager Jack or his board of directors, give credit to the “exceptional DWA employees,” or credit particular individuals by name. It is almost as if he does not work at DWA; Dave will never say, “I did this,” or “I did that.” Walking with Dave through the DWA office and facilities is an experience—almost like being in a scene from the movie “Patton.” People greet him warmly but tend to scatter and get busy quickly. It is clear there is great respect, and that folks take their jobs very seriously.

It has been my observation that the very best general managers often reference the people they learned from and are very comfortable giving credit to others. That is certainly true of Dave. He talks a lot about all he learned from Jack and about how capable and conscientious the DWA employees are. An additional observation of the very best managers like Dave is the positive relationships they develop with their board of directors. Every water agency is different. Certainly, people are different and have different personalities. However, the very best managers always find a way to build respectful, collaborative working relationships where everyone understands their role.

Organized, high-performing water agencies with a culture of excellence are no accident; they are the direct result of strong and effective leadership. DWA is an exceptionally performing organization because Dave assumed the mantle of leadership from his previous manager; used all that he learned; hired the best people; empowered them to do their jobs; and held all, most notably himself, to the highest of standards. After Dave’s retirement at the end of January, the continuation of DWA’s performance, exceptional employees, and culture of excellence will be his legacy.

Kris Polly is the editor-in-chief of Municipal Water Leader magazine and the president and CEO of Water Strategies LLC, a government relations firm he began in February 2009 for the purpose of representing and guiding water, power, and agricultural entities in their dealings with Congress, the Bureau of Reclamation, and other federal government agencies. He can be contacted at kris.polly@waterstrategies.com.