Kris Polly: Please describe the scope of your industrial operations and facilities.

Gordon Pederson: We’ll start with the Washburn Tunnel Regional Wastewater Treatment Facility, which is on the Houston Ship Channel in Pasadena. It treats the process wastewater from several refineries, chemical plants, and bulk storage facilities. The facility also treats 1 million gallons of municipal wastewater a day from the city of Pasadena. The Bayport Industrial Wastewater Treatment Facility, located in the Bayport Industrial Complex along the bay, has some domestic sewerage coming in from the cities of LaPorte and Shore Acres and serves more than 65 petrochemical customers. The 40-Acre Industrial Wastewater Facility treats wastewater from two chemical plants and a marine terminal operation in Texas City. 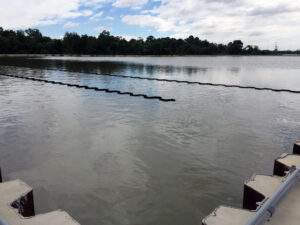 Kris Polly: How did the GCA prepare for the storm?

Gordon Pederson: We have an established hurricane plan that was activated. On August 24, we initiated the first phase of the plan, in which we prepared the facilities for the storm, checked all our provisional supplies for our employees on shift, tied down anything that could be blown away, and checked all our emergency equipment.

Harvey came in quite a distance south of us. We prepared for significant rainfall and were not necessarily concerned about the wind or the surge. Reports initially indicated that the storm would come ashore south of us, slowly move up through the state of Texas, and on to Oklahoma or Arkansas. Unfortunately, Harvey decided to stay in south Texas for a few days, move out to the Gulf of Mexico, and then slowly come back into Houston. We were far more prepared at our facilities than many of our staff could be at their respective homes.

With the exception of our Cedar Bayou Park Wastewater Treatment plant in eastern Harris County, our facilities all ran 24 hours a day through the storm. Due to rising water, our facilities could not sustain regular shift changes, and operating personnel worked tirelessly until it was safe to conduct shift changes. The operator on shift at our Blackhawk facility could not be relieved for 3 days due to flooded roads leading to the plant. Another operator was able to canoe in to safely make the shift change.

During the storm, many of our employees had floodwaters in their houses—some of their homes were submerged up to the ceiling. Twenty-eight of our employees had severe water damage. Mobility in the Houston area was extremely limited due to standing water for a 4-day period, so nonessential personnel were asked to stay home until the waters receded and safe travel conditions resumed. 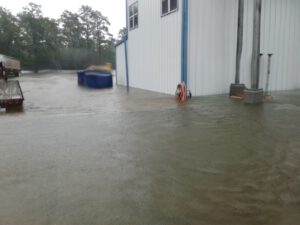 Kris Polly: How did your emergency plan function given the enormity of the storm?

Gordon Pederson: Except for the Cedar Bayou facility, which was inundated by floodwaters, we followed our plan. All our plants ran at maximum capacity through the storm. We did report some overflows and permit sampling issues due to the unprecedented rainwater falling on the facility. Over those 4 days, we received on average 48 inches of rainfall. I have never experienced a storm of this magnitude in my lifetime.

Kris Polly: How did the storm affect you personally?

Gordon Pederson: By the end of the first day that the storm arrived in our area, I couldn’t see the road from my front door. During the storm, my house flooded twice, with over a foot of water each time. It was 4 days before the water subsided enough for me to get out of my subdivision. I did have internet and cellphone service, so I was able to communicate with staff during that period of time.

Kris Polly: Please describe the scope of the damages incurred at GCA.

Elizabeth Free: At our Bayport facility, the perimeter road, which also acts a berm for one of the retention ponds, partially washed out. There was some minor facility damage as well—a small leak in the roof that required drywall replacement.

In addition, while the Washburn Tunnel facility was not flooded, waters from the Houston Ship Channel deposited a lot of silt and debris along the banks of the facility. There was also minor damage to a few buildings due to leaks in the roofs. 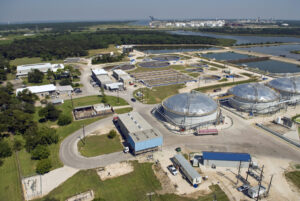 Next to the Cedar Bayou Facility, GCA’s Blackhawk municipal facility had the most damage, with two maintenance buildings that flooded. In addition, the bottom half of the interior walls required pegboard and insulation replacement. Almost all the small tools and machines had to be replaced. Some of the heavy equipment, such as the crane, the dump truck, and front-end loader, were flooded but repairable.

Given the enormity of the storm, the damage was minor. We fared fairly well.

Gordon Pederson: The small, 100,000-gallon-per-day Cedar Bayou Park Wastewater Treatment plant in east Harris County is part of a public utility district that we operate for the district. Its lift station was under 5 feet of water. A majority of the houses in that area had water up to their ceilings—there was a mandatory evacuation of that whole area. The wastewater plant received more than 6 feet of water. Fortunately, 20 feet away from that plant is a manhole that opens to a gravity sewer to the city of Baytown Wastewater Treatment Plant, which was operational.

The district has since entered into an agreement with the city of Baytown to pump the district’s wastewater to the Baytown treatment facility. The district has decided not to rebuild the Cedar Bayou plant and will continue to send its wastewater to Baytown. The public utility district is in the process of working with FEMA [Federal Emergency Management Agency] to demolish the current plant and make the delivery operations to Baytown permanent.

Kris Polly: Were there any unexpected developments during the storm?

Gordon Pederson: During the storm, we would receive 12 hours of a heavy rain—15–20 inches at a time. It would stop for a short period of time and then start again, for a total of around 50 inches. No one has ever designed conveyances to move that much water. We were absolutely shocked that we did as well as we did at all our facilities, which is a tribute to their staff and design.

Kris Polly: What are some of the key lessons learned from the experience? What advice would you have to other water managers facing an extreme flooding event?

Elizabeth Free: It is important to talk with FEMA about flood mitigation funding. FEMA wants to sponsor flood mitigation projects, so that the next time something like this happens, the damages aren’t as severe.

It’s important to get in touch with FEMA for guidance and to start the process. I recommend that water agencies have at least one member on staff with full FEMA Independent Study Training and at least one person on staff who knows how FEMA works and what FEMA expects as far as documentation and procurement. It is quite a process to navigate, with numerous deadlines for filing applications. 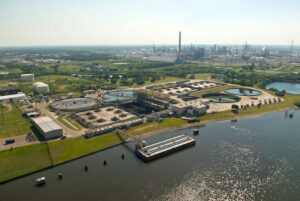 Communication was key at all levels to adapt to this unique storm. Our plan calls for us to shelter our first responders in an offsite location on the north side of Houston; however, given that this storm was more of a rainfall event without evacuations, the challenge was having the personnel resources to have access to our facilities. We accomplished this by acquiring hotels rooms close to our facilities. Not only did the rooms allow personnel who had been relieved after working extended hours to rest, but it also kept them close by to allow their return when needed.

This storm provided unique challenges that GCA had not experienced before, but by adapting our plan to meet the storm’s characteristics, we were able to keep our personnel safe and minimize damages.

We would encourage all managers to broaden their emergency response plans to include various types of storm scenarios and not just specifically hurricanes.