Since 1980, weather and climate disasters in the United States have cost more than $2.195 trillion, according to the National Oceanic and Atmospheric Administration. That price tag is only expected to rise. The U.S. Army Corps of Engineers’ Engineering With Nature (EWN) initiative seeks out and scales up nature-based solutions to these growing threats. In this interview, Municipal Water Leader speaks with Todd Bridges, the Army Corps’ national lead for the EWN program, about how everything from constructed wetlands and dunes to natural seawalls can protect communities from flood, drought, and other effects of climate change.

Todd Bridges: I was born and raised in California’s San Joaquin Valley. I went to college there, got my bachelor’s and master’s degrees at California State University, Fresno, and then did my PhD in oceanography at North Carolina State University. I got hired by the Army Corps’ Engineer Research and Development Center, headquartered in Vicksburg, Mississippi. I’ve been here for 30 years and have supported a range of research and technology development and innovation. For the last 16 years, I have served as the Army’s senior research scientist for environmental science. I also serve as the national lead for the EWN program.

Municipal Water Leader: Please tell us more about the work you’ve done at the Engineer Research and Development Center.

Todd Bridges: I started by doing research related directly to the navigation program and the sediment management and dredging program. The navigation program is one of the largest civil works programs in the Army Corps’ budget. We dredge around 200 million cubic yards of sediment a year to maintain the nation’s network of navigation channels. That’s a lot of sediment to manage, and there are requirements driven by environmental laws and other laws about how to manage that material. Now, as part of the EWN initiative, I look at how we can use that sediment beneficially to create nature-based solutions and systems that can support our communities, rivers, and infrastructure.

Municipal Water Leader: When was the EWN initiative started?

Todd Bridges: We formally started the EWN initiative in 2010. For more than a decade, our team has worked with other programs across the Army Corps, other federal and state agencies, universities, and the private sector on the research and application of these ideas. In 2020, Congress recognized the need to create a separate program in the budget to accelerate this work. Congress provided $12.5 million for fiscal year 2021 and $16.25 million for 2022.

While we formalized the initiative in 2010, the history of integrating nature into infrastructure solutions goes back decades, even centuries. In fact, I could point to Army Corps projects that go back 100 years that would illustrate this kind of approach. These ideas took a more modern shape in the 1960s with the work of the Scottish landscape architect Ian McHarg and of H.T. Odum in the field of ecological engineering.

We want to promote natural solutions and give the Army Corps and other organizations the capability to deliver more projects that have these qualities. We’ve been increasingly successful in expanding our capabilities, for example by improving the numerical models we use to support engineering design and to evaluate natural systems’ effectiveness in managing flood risk or enhancing aquifer recharge.

Municipal Water Leader: Please give us an example of a nature-based solution.

Todd Bridges: Last year, we published International Guidelines on Natural and Nature‑Based Features for Flood Risk Management. We led the effort through the EWN program, but it was an international effort that included participation by 75 organizations and more than 125 contributors and authors from a dozen countries. Participants worked for 5 years to assemble knowledge and case studies and publish this 1,000‑page guideline on how to use nature-based features, such as islands, reefs, forests, beaches, and dunes, alone or in combination with conventional infrastructure, to provide risk management for flooding. That document has been downloaded nearly 6,000 times since we published it.

We work across the Army Corps, including at our EWN proving grounds in the Buffalo, Galveston, Mobile, Philadelphia, San Francisco, and St. Louis Districts and the South Pacific Division, to look for opportunities to implement nature-based approaches for infrastructure in an intentional way across their portfolios. Within the last year and a half, we have established four Army Corps district team members as national EWN practice leads: two for river systems and two for coastal systems. They are drawing from their extensive experience and leading practice to support their colleagues across the enterprise in implementing these approaches. They’ve established a cadre of practitioners from our field offices around the country who are sharing their experiences and supporting each other to implement these ideas.

Examples of a nature-based solution include the series of projects built by the Philadelphia District and its partners in the bays and estuaries of New Jersey, which was affected by significant flooding during Hurricane Sandy. The district is partnering with the State of New Jersey, nongovernmental organizations, universities, and the private sector to carry it out. Using sediment dredged from the extensive navigation channel network in the area, it is building wetlands, islands, and other features to create system-scale resilience to storms and flooding. These features will provide both storm protection and fish and wildlife habitat.

One of the oldest nature-based research projects carried out by the Army Corps was the Yolo Bypass in California, which involved the construction of a series of weirs. The first weir on the Sacramento River was constructed in 1916 to direct flood flows off the river onto the land. This was done because it was recognized that a levees-only approach was not going to be sufficient. The Yolo Bypass includes 59,000 acres of land that can be inundated, relieving pressure in the system. Although 75 percent of the land is privately held, 16,000 of those 59,000 acres are included in the Yolo Bypass Wildlife Area, which is managed by the California Department of Fish and Wildlife. It is a beautiful area of wetlands that can store floodwater while providing wildlife habitat.

Municipal Water Leader: How far does the $16.25 million appropriated by Congress to EWN go toward building out these solutions nationwide?

Todd Bridges: There are ways of building infrastructure using these principles that will reduce our long-term operational costs. There are opportunities to save time, money, and energy by partnering with nature. How can we use the functions, structures, and services that nature provides, harmonizing with them rather than trying to dominate and control them? As climate change continues, those of us who work in the water field can see the problems and strains in our infrastructure systems that are being created by trying to control nature.

We think that EWN can expand the value of infrastructure investment. A great example of that is the Dos Rios Ranch project in central California, which restored 2,500 acres of floodplain on the San Joaquin and Tuolumne Rivers. This largely agricultural land was prone to flooding. Over the last several years, River Partners, supported by the Army Corps and the California Department of Water Resources, has planted 600,000 native trees and has restored a system of wetlands that can support aquifer recharge. The State of California just announced that this land is going to become California’s newest state park. That’s an example of expanding value. The project combines flood risk management, aquifer recharge, habitat for species, and multipurpose infrastructure.

Municipal Water Leader: Does the Army Corps’ EWN program overlap at all with the defense side of the army’s duties?

Todd Bridges: In my position, I support both the civil works and military sides of the house related to improving the resilience of infrastructure, which includes military installations. The U.S. Department of Defense operates facilities, installations, and sites around the world that cover 25 million acres of land and water. The EWN program is working with the army, the navy, the marine corps, and the air force to implement these principles and practices on their installations to improve mission resilience with reference to flooding, drought, wildfire, and other challenges.

Todd Bridges: We need large-scale, nature-based solutions, projects, and interventions to make a meaningful difference in addressing the climate change–related challenges our society faces. Whether we’re talking about flooding— intensified storms and rainfall events—or prolonged drought in the western half of the country, we need to scale up these measures. We need to make the exceptional nature-based projects of the past the common approach for delivering projects in the future. To do that, we need to continue to develop our technical capabilities and our business processes and to support policies that enable the federal government and its partners to deliver these kinds of projects.

Todd Bridges is the national lead for the U.S. Army Corps of Engineers’ Engineering With Nature program. He can be contacted at erdcpao@usace.army.mil. 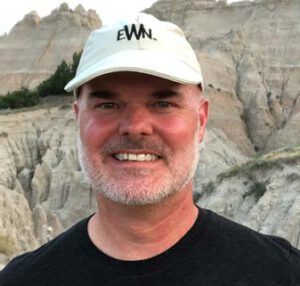