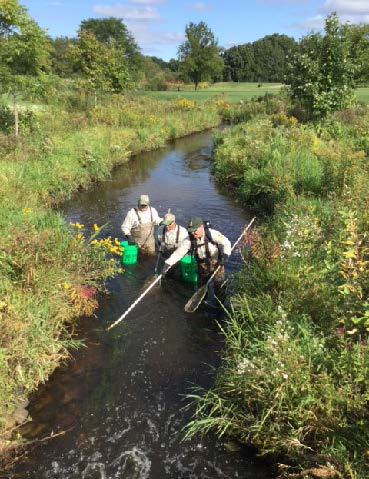 The Brown’s Creek Watershed District (BCWD), located near Stillwater, Minnesota, was recently recognized by the Water Environment Federation with its Water Quality Improvement Award for reducing runoff and pollution to the trout stream it works to protect. Despite being located in a quickly urbanizing area, the BCWD has managed to improve the biological health of local water bodies with the result that native species are returning in a sustainable manner. In this interview, BCWD Administrator Karen Kill tells Municipal Water Leader about the agency’s activities and the successes it is seeing.

Karen Kill: Since 2002, I have been the administrator of the Brown’s Creek Watershed District, which has been in existence since 1997. I work with the five-member management board that oversees the BCWD’s activities. I am one of the only staff, but we contract with Emmons & Olivier Resources, Inc., for engineering services; contract with Smith Partners for legal services; and coordinate with the Washington Conservation District for a lot of technical services.

In the Land of 10,000 Lakes, there is definitely a lot of water, including rivers and a lot of surface water. In our denser, more urban area, the state requires there to be a watershed management organization of some kind. We are a watershed district; entities of this kind have a board that is appointed by the county commissioners who represent our area. Our board is authorized to levy an ad valorem tax through property tax levies to raise money for projects that improve and protect the quality of surface water and groundwater and protect against flooding.

Watershed districts come in a lot of different sizes. Some cover 1,000 square miles or more. Our watershed is small: only about 30 square miles. The thing that we all have in common is that our boundaries follow watershed boundaries, not political boundaries. Water doesn’t follow political boundaries, so it is useful to have an entity that can collaborate with and bring together multiple cities, counties, and state agencies. The watershed districts are overseen by a state organization called the Board of Water and Soil Resources. We also work closely with the Minnesota Pollution Control Agency and the Minnesota Department of Natural Resources (DNR). We are the collaborating entity that brings all those partners together for projects related to the resources in our watershed.

We are located near Stillwater, Minnesota. Brown’s Creek, our namesake, is a metropolitan trout stream. That is unusual in our area—there aren’t a lot of streams in the Twin Cities metropolitan area that still have water of a high enough quality to support trout. Brown’s Creek flows into the St. Croix River, which is a regional and national scenic river.

When I started working at the BCWD in the early 2000s, there was still a fair amount of farmland surrounding the city of Stillwater, which had a population of about 15,000. While Stillwater is part of the Twin Cities metropolitan area, it is not a suburb. It is the birthplace of Minnesota, and it has its own downtown. About 20 years ago, we began to see enormous growth in the commercial and residential development in our area.

One of the reasons that the BCWD was first formed is that there were major flooding problems in our area. We worked with municipalities, the county, and local residents to come up with ways to alleviate flooding aside from just adding outlets to landlocked lakes to flow into the next lake or stream and cause problems somewhere further downstream. Now that a lot of that flooding has been alleviated, we’ve been focusing more on water quality.

Municipal Water Leader: What role does trout protection play in your overall work? Is it a main focus or is it a consequence of your work on water quality?

Karen Kill: Most of our small watershed flows into Brown’s Creek, either by groundwater connection or surface overflow. Little that we do cannot somehow be tied back to that trout stream. In 2008, Brown’s Creek was listed by the Minnesota Pollution Control Agency as impaired because of its lack of cold-water fish and cold-water assemblage. That basically means that we didn’t have the cold-water bugs and fish that you would expect to find in a healthy cold-water system.

In the studies we did in 2009 and 2010 after the impairment listing, we found that the one of the main stressors was high temperatures. Urbanization contributes to this, because our streets are connected through a catch basin to the stream or to a lake. When rainwater falls on these hot, impervious surfaces during the summer, it heats up before flowing straight into the stream, raising the stream’s overall temperature.

The other main stressor is high sediment loads. We’re seeing a lot of changes to our climate. We can’t argue with the fact that we are seeing significantly more intense storm events than we used to. They’re coming in different patterns and at different times of the year. Our infrastructure was designed around the idea of a 2‑year storm, a 10‑year storm, and a 100‑year storm. We designed these systems for storms with 2.8 inches of rain over 24 hours. Now, we may get 2.8 inches of rain in 20 minutes, and then hot and sunny weather for the rest of the day. That is changing our streams and the life that is in them. The storms are changing our channels and washing more sediment into them.

With that being the case, we have focused on projects to reduce sediment loads. We have a robust monitoring program with stream-monitoring stations that automatically collect data every 15 minutes during the summer. That allows us to see if there are disproportionate sediment loads in Brown’s Creek, and if so, where.

We’ve also monitored the performance of some of the projects that we’ve already put in to see which are successful and whether the health of various areas is beginning to improve.

We’ve been partnering with a local high school’s advanced biology class. The class has been monitoring the biology of Brown’s Creek, which provides us with additional information. We’ve also been working with the Metropolitan Council and the Washington Conservation District, which also do biological monitoring.

Municipal Water Leader: Are there also specific pollutants related to the increasing urbanization that you’re having to remove from the water?

Karen Kill: We’re more worried about sediment than chemicals. The sediment I referred to is generally dirt from people’s yards and construction sites that we would prefer to keep there and not in the water body. We are fortunate not to have a lot of high toxins in our water system. In the past, we have seen evidence of higher pulses of copper. We’ve also identified a couple of places where algaecide may have been put into some storm water ponds. After having some conversations about the need to change behaviors related to those issues about 12 years ago, we haven’t seen high copper levels again. Sometimes we do see high levels of heavy metals or pesticides. The whole country is dealing with high mercury levels, but mercury hasn’t been determined to be a major stressor in our systems.

Municipal Water Leader: Have you been able to measure the effects of your work on those two factors?

Karen Kill: We monitor Brown’s Creek on several parameters, including flow and chemical and biological parameters. The biological parameters tell us the most about our results. For instance, there’s a stretch of Brown’s Creek that had previously been mown directly to the edge. We worked with the owner of the land in that area to install a native-grass buffer along that stretch. We were able to have the DNR come out and carry out a fish survey in that area, which we had already physically surveyed. We were pleased to see that within one season of the project, an area that had almost no diversity of pools and riffles suddenly had 14 pools. The DNR had allotted an hour to monitor fish along a 1,000‑foot stretch of the creek, but we only did about 150 feet because we were finding so many trout. We have evidence that natural reproduction has been happening in this stream, which we hadn’t seen for a decade or two.

There is still a long way to go. The DNR does stock Brown’s Creek. It previously stocked it with brown trout, but since we’re starting to see some natural reproduction of brown trout in the creek, the DNR is switching to stocking rainbow trout. Those are both nonnative species—brook trout would be the native trout in this area.

Our biological surveys are also identifying rainbow darters, a colorful cold-water fish that is native to our area. We’re starting to see macroinvertebrates and some pollution-intolerant species. The trout are like the canary in the coal mine—their presence or absence signals whether the stream is a healthy ecosystem. However, we also want to have macroinvertebrates, native bird species, native vegetation, and habitats for adult insects. We want to have a healthy ecosystem that can support trout, not just to artificially stock the stream with trout that cannot survive in it.

In 2014, a 6‑mile state trail was developed along an old railroad and follows directly next to Brown’s Creek for 2–3 miles. It is giving residents more access to Brown’s Creek and its beautiful groundwater gorge before it goes into the St. Croix River. I’ve heard people say things like, “I’ve lived in Stillwater my whole life and I never knew this was here.” It really is exciting to see, not only for its beauty, but because its health has improved drastically over the last 20 years.

Even though this area has been economically prosperous and has seen a lot of development, we’ve continued to have improvements in the trout stream. It’s not easy to have both of those things. It has required a lot of partnership and collaboration. The watershed district is a small entity, and we couldn’t do any of it without innovation or without our partners.

Karen Kill: The watershed district is required to have a 10‑year management plan, which we create after communicating with our residents, our communities, the county, and regional and state agencies. Right now, we’re about halfway through our existing 10‑year watershed management plan. There are still identified projects that we have yet to finish.

In two of our upcoming projects, we will be working with two golf courses, Oak Glen Golf Course and Applewood Hills Golf Course, to reuse storm water for irrigation. We are coordinating with the Minnesota Department of Transportation and with Washington County to increase storm water management on an upcoming road project. There is an unsafe intersection that needs improvement. It has a lot of impervious surfaces, including onramps, offramps, turn lanes, a raised road intersection, and frontage roads. There’s not a lot of room in the road’s right of way for storm water management. Luckily, there is a golf course at one corner of this intersection that is willing to reuse the storm water from this intersection project. It will store that water in ponds and then use it to irrigate, rather than using clean, fresh groundwater. That storm water will meet about 50 percent of the golf course’s irrigation needs over the course of the season. From our point of view, it is beneficial that that heated, nutrient-rich water will not go downstream into a lake, and that the cold, fresh groundwater will stay in the ground.

Karen Kill is the administrator of the Brown’s Creek Watershed District. She can be contacted at karen.kill@mnwcd.org.

Innovations in the Pipeline at Krah USA