At the spot where water from the San Antonio Water System’s (SAWS) Dos Rios Water Recycling Center cascades 50 feet down into the river, a visitor from a group of international guests gently wept. When asked if everything was alright, he nodded. “I’m ok,” the visitor said. “It’s just that in my country, we don’t even have water like this to drink. And here you can just send it into the river.”

The group had come because they heard that Dos Rios, SAWS’s largest water recycling center, is the place to learn about sustainable resource management in wastewater. As Texans are prone to brag, the Dos Rios staff will boast that it is the greenest place in Texas.

Back in the 1990s, SAWS began viewing all treatment process residuals as valuable resources, not waste products. Those residuals include 140,000 acre-feet of recycled water per year, 165,000 tons of biosolids, and 1.5 million cubic feet per day of methane-rich digester gas. 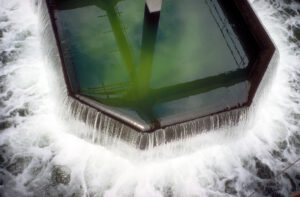 In 1996, the staff hatched a bold plan to try to reuse everything, putting nothing to waste. The catch was that any project they pursued had to be environmentally friendly while either saving money, being cost neutral, or producing a revenue stream. If projects had side benefits like water conservation, that would be factored into a cost-benefit analysis.

The effort, led by SAWS Chief Operating Officer Steve Clouse, took almost 20 years to accomplish, but it demonstrated that being green and fiscally responsible are not mutually exclusive. In fact, they are complementary goals. And so visitors come from all over the world to Dos Rios to see what SAWS did and how they did it.

Reusing water was the easy part. When faced with supply limitations from its primary water source in the 1990s due to endangered species concerns, SAWS built the nation’s largest direct recycled water system with a capacity of 35,000 acre-feet per year. More than 130 miles of large diameter pipelines deliver tertiary-treated water that is almost drinking-water quality to irrigators, industrial customers like a Toyota truck plant, Microsoft, and the historic Alamo.

The $140 million system is dual use in that water is also delivered to remote outfalls on creeks and rivers for environmental flow maintenance. San Antonio’s world-famous River Walk had previously been supplied with water from potable wells; today, the flow is almost entirely recycled water, thereby saving drinking water for potable uses.

Another outfall on Salado Creek resulted in the removal of the creek from the federal list of impaired water bodies for dissolved oxygen, and it laid the foundation for large public investments in linear parks that today are a community magnet for hiking and biking.

Reusing biosolids was more challenging. Four hundred tons of biosolids per day were being disposed of in a landfill when the plant operators began experimenting with compost production. Biosolids were mixed with wood-based materials like brush clippings and ground-up telephone books in static piles. 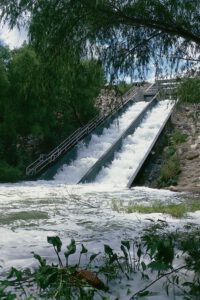 With growing confidence in its composting ability, a 16-acre facility was constructed; additional equipment was purchased; and before long, the staff was producing 30-foot mountains of superior-quality compost.

But costs were high and marketing was difficult. It was doubtful that composting could continue unless the private sector was engaged, so the entire operation was outsourced. Today, two contractors truck the biosolids from Dos Rios to their own composting facility, and in 2018, about 90 percent of all biosolids will be made into compost. Contractors mix the compost with various soil products and sell it at retail outlets. For SAWS, the cost is slightly cheaper than landfilling, and compost also saves water when applied to local landscapes.

With successful water reuse and biosolids composting operations in place, attention began to turn to the last piece of the beneficial use puzzle—digester gas. Some of the methane-rich gas was being used to maintain temperatures in biosolids digesters, but most was simply flared off.

To achieve an economy of scale for any potential beneficial use project, biosolids transfer lines were constructed from SAWS’s other water recycling centers to consolidate all solids handling at Dos Rios. Each was a large capital project—one involved a 700-foot tunnel 90 feet beneath the San Antonio River. These large projects, along with depressed market conditions for methane gas and limited technologies for extracting it from digester gas, explain why SAWS’s bold reuse plan took nearly 20 years to accomplish.

Finally, with all digester gas produced at a single facility, the time had come to explore full utilization.

SAWS once again turned to the private sector for ideas on how to use the digester gas. The Ameresco Corporation responded with a proposal to build a first-in-the-nation processing facility to purify and condition the gas and sell it on the open market, with a portion of the revenues returned to SAWS. So far, SAWS has realized about $20,000 to $100,000 per month, and the flares no longer burn. Ameresco invested $7.5 million and estimated that its facility would have about a 3-year payback while reducing carbon emissions by about 20,000 tons per year. 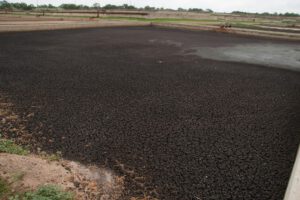 Meanwhile, recent sharp increases in composting costs have prompted SAWS to look for ways to volatize more biosolids into gas, so there is more gas to sell and the cost for disposing of biosolids by composting can be reduced. One such process is hydrolysis, which explodes and disrupts the cell membranes of organisms in sludge, making them more digestible and producing more gas.

SAWS conducted a feasibility study for thermal hydrolysis and is now examining additional alternatives, such as chemical hydrolysis. SAWS’s sustainability initiatives did not stop with water, biosolids, and gas. They also extend to other sustainable energy projects. On two sides of the Dos Rios site, 250 acres of buffer lands were leased for construction of a 20-megawatt solar farm. When it was built in 2010, it was the largest in Texas.

Reduction in energy use has also been a target for increased efficiencies. A large fraction of treatment costs at Dos Rios are for power to supply air to biological reactors. (Air blowers here are so large that it costs $1,500 just to turn one on.) To save energy, SAWS recently replaced 100,000 aeration diffusers in 20 basins with more-efficient, fine-bubble membrane diffusers. After the diffuser project, fewer blowers are required to operate, operations and maintenance costs are lower, and employee safety has increased. Previously, staff had to periodically clean the old-style ceramic diffusers with acid; now, they only have to spin off a retaining ring and replace a rubber diffuser membrane.

Another sustainability solution involved replacing chemical insecticides with natural pest control methods near the Dos Rios solids handling facility. Plant operators suggested trying purple martin birds instead of spraying chemicals for fly control, which was costing $50,000 per year and posed a chemical exposure hazard to both employees and the biological treatment process. SAWS carpenters at the plant built almost 500 birdhouses, and tiny parasitic wasps and specialized soil bacteria were added to the natural pest control arsenal. Today, no chemical insecticides are used at Dos Rios. 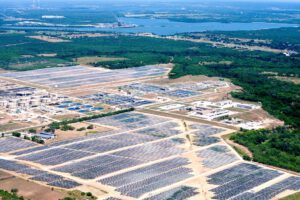 Going back to the cascade of water into the river and the emotional reaction of the visitor, staff explained to the visitor that SAWS does not view water put into the river as a waste. During dry times, there is no background flow in many Texas streams, and there would be no flow at all in the San Antonio River without water from SAWS’s water recycling plants. Flow maintenance in the river is important from an environmental perspective but also from an economic viewpoint, because large fishing and recreation industries downstream near the Gulf of Mexico depend on freshwater flows from San Antonio.

In another bold sustainability initiative, SAWS recently filed an application with the state of Texas to make a formal dedication of 50,000 acre-feet per year of its recycled water to maintain instream flows, to ensure that adequate volumes make it all the way to the Gulf of Mexico. Water recycling at Dos Rios is about finding the sustainable balance between reuse and the protection of the environment and regional economies.

When the Dos Rios operators boast that the SAWS water treatment center is the greenest place in Texas, it is not really bragging.

Gregg Eckhardt is a senior resource analyst for San Antonio Water System. He can be reached at gregg.eckhardt@saws.org