Just 7 years ago, the National Mall looked quite different than it does today. The grass was patchy and laden with weeds, and the soil was compact and bare, causing silty water to run through the streets when it rained. Needless to say, this was not the image the National Park Service (NPS) wanted the many visitors and residents of Washington, DC, to see when they visited the mall. In 2011, the NPS began a project to revive the nation’s front lawn.

As part of the project, the NPS undertook an innovative project to correct the soil beneath the turf and designed a collection, storage, and irrigation system for storm water. Tyler Young, writer for Municipal Water Leader, had the opportunity to speak with Michael Stachowicz, turf management specialist for the NPS, about the National Mall, its revitalization, and the use of storm water to maintain the lush turf. Throughout the interview, Mr. Stachowicz showcases the innovative irrigation system and highlights the benefits of using storm water for irrigation in recreational areas. 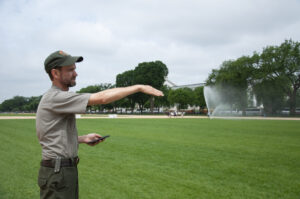 Tyler Young: Please tell us about your background and how long you have been with the National Parks.

Michael Stachowicz: I have been with the NPS for 5½ years. I started when phase I was finishing up, and I helped manage phases II and III. Previously, I had spent over 20 years managing golf courses. During that time, I built a golf course; in doing so, I was able to work with conservation groups as well as storm water retention and other drainage systems. I will say that it is a lot easier to manage water on a golf course than it is here, because you can make ponds. I went to the University of Massachusetts for Turf Management. My education and previous work gave me the experience I needed to come here.

Tyler Young: Please explain to our readers what prompted the implementation of this system.

Michael Stachowicz: This project predates some of the District of Columbia’s storm water rules. The NPS recognized that the landscape had been worn down. We had been getting 33 million visitors a year, versus the 3 million people that were in the country when Pierre L’Enfant laid out the District of Columbia. The vast number of people in this area causes a lot of wear and tear.

We were looking at hard-packed areas as well, which are common in many parks around the country. The soil here is a heavy clay. Infiltration is difficult, so the water mostly runs off. With compaction, it is hard for grass to grow. Before the system, this was a dust bowl. The mall was mostly weeds with bare patches of dirt. When it rained, water would just run down the surrounding streets carrying silt. It was wet, slick, and muddy when it rained and dusty when it was dry. People would still come out to the mall, but now people come and sit and play games on the grass. It is just a nicer environment. 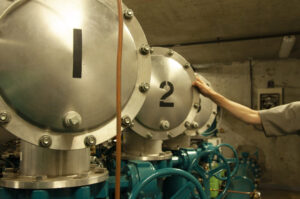 The NPS undertook this $42 million project to try to improve the United States’ front lawn. There was a lot of engagement with the community to encourage this project. We wanted the mall to reflect our ability to take care of something with the utmost priority. There was also an environmental component to it with the storm water system. The irrigation system was efficient and fit in with later directives from the District of Columbia.

Tyler Young: Can you tell us about the major components of the system, and what path water takes when it enters the system?

Michael Stachowicz: The center panels of the mall have all been rebuilt over the past 5 years. They were rebuilt to sports field specifications, which includes internal drainage, irrigation, and engineered soil. We used a high sand mix to get infiltration in our traditional clay soil. Sand does not compact as much as clay, which makes it beneficial for this project. It is built like a penetrable, rooftop garden, but here we can take in 11 inches of water an hour. There is drainage beneath the grassy areas and within the curb around the grass that collects water and distributes it to four cisterns. Each can hold 250,000 gallons of water. The first, second, and fourth cisterns pump to the third, which is the one we use to irrigate. As we are pulling water from there, all the water cisterns are pumping into it to maintain a steady water level. Once we run out of water, we have the ability to fill the cistern with city water.

The cistern should supply 68 percent of our water requirements. Whether that has panned out, I cannot tell you. We are in our first year of full operation, so hopefully by the end of this year we will have more statistics to report.

Tyler Young: What happens to the water when the cisterns are full?

Michael Stachowicz: Right now, it is released into the storm water system for the District of Columbia. It does not happen in the summer, but it does in the winter. One of the pushes now is to use weather forecasts to predict how much water we should pump out to prepare for the weather to take pressure off the system. That is down the road, but that is how we would get better at it.

Tyler Young: How does the system distribute the collected water?

Michael Stachowicz: The irrigation system is much more efficient than a lot of other irrigation systems. There are 165 heads on the mall, and I have individual control over every single one. When you see a typical lawn go on, typically a block of heads is turned on. I can turn on any number of heads I wish. This means that I can control specific areas and better use our water.

We have control over edges that seem to dry out more than the center of the lawn as well. The system is hooked up to a weather station that produces the evapotranspiration (ET) rate. The ET rate is basically how much water the grass loses in the course of a day. On a humid and cloudy day, we do not lose anything. When we have dry weather with hot sun, we lose a lot more. During a normal summer day, I may have to irrigate a quarter of an inch at night to replace what the turf has lost.

The system autoprograms each head to replace what was lost that day. What I tend to control is the percent adjustment for each head because there are microclimates for each. During the summertime, we may run 100 percent or 110 percent of what our ET rate is, and in the spring and fall, we tend to be around 75 percent to 80 percent of the ET rate. The ET system is positioned in the middle of the National Mall, so some of the sun angles can prevent it from having a perfect calculation for the whole area.

For the future, we are looking at soil moisture monitors. The ones currently on the market are still pretty buggy, so we are looking forward to the new technology they are developing for our system.

Our system has two failsafes to ensure that it shuts down during a rainstorm to prevent wasting water. One is the weather station indicating it has rained, and the other is a sensor that turns the system off once we receive 0.10 inch of rain.

Tyler Young: Do you have regular times that you irrigate?

Michael Stachowicz: Yes, we start at 11:00 p.m. and are done by 5:00–6:00 a.m. Each turf area is watered every second or third night, depending on the weather and what is going on. No matter what, we want to ensure that the crown of the plant dries out. When the crown starts to dry out, there is a hormonal response for the grass to push roots down making for a stronger plant. Plus, if we constantly watered, we would be promoting disease and fungus. That being said, we can only irrigate 6 to 7 months a year.

Tyler Young: Have other parks in the area taken up initiatives similar to this?

Michael Stachowicz: I do not know if we have caused a domino effect, but I do know that this is a viable way to use storm water and has worked itself into other projects. I believe the Eisenhower Memorial being built on Maryland and Independence Avenues, SW, has a cistern system for watering. Now the District of Columbia encourages these systems through its regulations.

Tyler Young: Do you see storm water as the way of the future for irrigating recreational areas in municipalities?

Michael Stachowicz: Yes, it is important to irrigate and find alternative resources to potable water. We are pretty lucky to be where we are in the Northeast, to have as much rain as we do and to be able to design a system like this for a historic landscape.