Sergie Albino’s career has truly gone to the moon and back. After helping NASA with its effort to search for water on the moon, he wanted to find ways to improve the water on Earth. With that in mind, he started ecoSPEARS, a company that has developed technologies to clean up environmental contamination. These include the use of ultraviolet (UV) technology to clean contaminated water and alcohol and absorbing spikes to treat soil and sediments. In this interview, Sergie Albino tells Municipal Water Leader about ecoSPEARS’ cost-effective treatment solutions and the importance of a holistic approach to environmental protection.

Sergie Albino: I am the cofounder of ecoSPEARS, a clean tech innovation company that is building technologies to help our environment. I went to school at the University of Central Florida and got an MBA at Rollins College. I started out as an aerospace engineer. I did a lot of work with the U.S. Department of Defense and eventually at NASA’s Kennedy Space Center. I met the other cofounder of ecoSPEARS, Dr. Phil Maloney, during our work for NASA on a lunar rover program to search for water on the moon.

Sergie Albino: Ian Doromal, Dr. Phil Maloney, and I cofounded ecoSPEARS in 2017. We focus on clean tech, and we’ve obtained exclusive licenses from the NASA Kennedy Space Center for one of its environmental cleanup technologies, the Sorbent Polymer Extraction and Remediation System (SPEARS). We have also been building new technology, including the UV Cube water treatment system that we are now rolling out in the Spokane River Valley. We are a venture-backed company and have raised $3.2 million to date. We started with a seed round of $2.1 million or $2.2 million and recently closed our safe round for another $1.1 million. We have about 10 full-time employees and 5 part timers in Altamonte Springs, Florida. Our work takes us to California, Hawaii, and Washington State, and we have upcoming deployments in Guam; Sweden; and Washington, DC.

Municipal Water Leader: How did you discover the technology for ecoSPEARS?

Sergie Albino: I worked as a subcontractor of NASA from 2007 to 2012, and around 2010–2011, I finished my MBA program at Rollins. I took a class called Global Sustainability Program that was particularly enticing because it included a 2‑week trip to Costa Rica. Being involved in the immersion program in Costa Rica and seeing sustainability being built from scratch inspired me. I already did engineering consulting on the side, but at that point I started wanting to address a need in the world. That eventually led to me to reach back out to Rollins and to become more involved with the school to pay it forward. I learned that NASA had approached Rollins about the NASA scholar distinction program, which was intended to match NASA technology with one or more MBA teams and spark entrepreneurship and green ventures in central Florida. In our third year, the SPEARS technology came about, and I recognized the names of Dr. Maloney, Dr. Jackie Quinn, and Dr. Robert Devor and wanted to reconnect with my old buddies. Long story short, here we are 4 years later.

Municipal Water Leader: What is the problem that ecoSPEARS seeks to solve?

Sergie Albino: Once chemical contamination gets into the environment—into groundwater, soil, and sediment—it is a daunting task to clean it up. There’s a whole slew of different types of chemical contamination, caused by both legacy and emerging chemicals. We focus primarily on contamination by polychlorinated biphenyls (PCBs). PCBs were invented in 1929 and were used in transformers in the electrical utility market, painting supplies, caulking for windowsills and doors, and in the maritime industry. They were banned by the U.S. Environmental Protection Agency (EPA) in 1970 after it was discovered that they contain carcinogens and have a lot of bad effects on health and wildlife. In 1981, the manufacture and use of PCBs was banned globally. Some users were grandfathered in, but if their operations leak PCBs into the environment, they are responsible for the cleanup.

Once that contamination is in the environment, the only way to eliminate it that is recognized by the EPA is to dig it up and send it to a landfill, where it can be stored forever. The environmental liability doesn’t leave the balance sheet of the client. If the client wants to eliminate the contamination completely, they burn it in the incinerator. It is a catch-22. You’re sending something far away and then burning it, which costs a lot and creates greenhouse gas, which is another pollutant.

There was no good way of eliminating that contamination until we came around and looked at the issue from a sustainability perspective. How do we properly eliminate these contaminants without having to incinerate them or transport them across the country?

Municipal Water Leader: How do you capture that chemical contamination?

Municipal Water Leader: Can your technology be scaled for larger sites?

Sergie Albino: Our vision for larger programs is to automate the entire process using a gantry system. We will have a crane system similar to the system that moves a camera around the stadium during a professional football game. We will use automation, machine learning, and Internet-of-things technology to move around and pick larger maps—about 1 square meter in size—and then automate the deployment process and eventually the sampling and extraction process. The technology can also be deployed using boats with a Babbitt arm or an A-frame system in the back; that’s what we would call a manual deployment.

Municipal Water Leader: So in a water application, the devices are dropped into the water by boat?

Sergie Albino: That is more for sediment applications; they have to go into the sand. It’s a longer process because the contamination is absorbed and then fused into the plastic. The most ideal sites for that are sites like the Port of San Diego, where there is California eelgrass, which is a state-regulated and -protected sensitive wetland barrier, or vernal pools in New York.

We’re really excited about a new technology that we have developed with our partners at Violet Defense. The CEO of Violet Defense, Terrance Berland, and I have

collaborated several times in the past. Terrance is also the lead investor in ecoSPEARS. Violet Defense is also based in central Florida. Terrance and Violet Defense have a couple of patents on a UV transmissive lens and a vortex design reactor that allows for better dosing of UV-C in aqueous environments, or water. This allows us to use UV lamps without a protective quartz sleeve, which typically degrades over time. By leveraging that intellectual property, I was able to build a pump-and-treat system called the UV Cube. We pump water into our reactor and dose it with UV, and clean water comes out. It will probably include some byproducts of destroying PCB that we will then filter out using carbon filtration. We’re under contract with Kaiser Aluminum to develop a 50‑gallon-per-minute system that we will deliver in May to treat the PCB plume on its site in Washington State.

Municipal Water Leader: Is there a situation where the SPEARS are used in water?

Sergie Albino: The SPEARS are more intended to treat pore water in sediment. The SPEARS would probably work in stagnant water, but it takes longer for them to absorb contamination from water. With UV, we can just hit it and it’s done.

Municipal Water Leader: What is the market for your technology?

Sergie Albino: The first market that we typically address is made up of manufacturers and utilities. Another market involves state regulators. When a company shuts down a site and files for chapter 11, that site becomes what’s called an orphaned site, and the state now owns it. Now it’s up to the state to clean it up, often with limited funding or resources. What’s nice about working with the state is that it is simultaneously the client, the regulator, and possibly a good friend in the industry.

Municipal Water Leader: Are there municipal water systems that are currently sourcing their water from some of the areas you are working on?

Sergie Albino: Yes. Municipal water suppliers typically process water that comes from everyone’s drains, which can potentially contain PCBs, depending on the age of the pipes, the local industries, and how their systems have been handled. There are also other contaminants of emerging concern, such as per-and polyfluoroalkyl substances (PFAS), which are in coated pans, camping gear, and Scotchguard. Every single time we wash those Teflon pans, traces of PFAS go down the drain and into municipal systems. That’s a really big issue that’s coming into the municipal market. Another alarming issue for which the regulations aren’t there quite yet is contamination from pharmaceuticals, including heart medications, chemotherapy medications, and birth control pills. The issue isn’t the pills themselves, but the remnants that go down the drain after you ingest them and urinate them out. Those substances now need to be processed by municipal water suppliers.

Municipal water is an industry that changes slowly. That is partly because it is made up of governmental entities that make a lot of their decisions cautiously. Because they’re slow to adopt new and emerging technologies like ours, we sometimes bypass them as clients; we’ll never make it as a startup if we rely on them. We are selective about the municipal organizations we partner with for that reason.

Municipal Water Leader: What other top issues affect your business?

Sergie Albino: I think the water sector is starting to understand that we have not really priced water as a precious resource. If you do not value something, you do not price it the right way and you abuse it. It’s something that you take for granted until it stops working. If we value water the right way, it creates value for those municipal industries, gets them better funded, and gets them moving faster to adopt better technologies to address contamination. Instead of waiting for regulation to come out and then working to catch up to it, the industry needs to work ahead of regulation.

The industry needs to be much more proactive—I’m not just talking about municipalities, I’m talking about everybody. This is why, even in a startup, I’ve incentivized my team to go out there and make friends. We truly do want to help, and we want to show that even a small organization can create a wave of difference.

Sergie Albino: One of the pillars we built ecoSPEARS on is education and outreach. We look 10 years ahead, forecast what the company could be, and build it to be that. The kids who are in second and third grade now are likely to be my next sets of talent. Educational outreach by the industry needs to be part of the bigger vision. We need to start inspiring our youth to be part of the water industry, whether as a marketing person, as a salesperson, an engineer, or a geologist. Growing up Filipino, we have three choices: lawyer, doctor, or engineer. I want my kids to understand that if they have a passion for entrepreneurship, they don’t have to peg themselves as an engineer, a lawyer, or a geologist. There is a greater mission, and in that greater mission, you will find your path and your North Star. 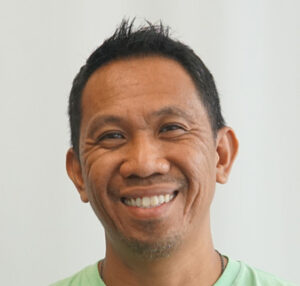