San Diego’s public utilities provide drinking water to around 1.3 million people—and rely primarily on imported water to do so. Recent years of shortage, high prices, and mandatory restrictions have highlighted the vulnerability of this water source and inspired the city to invest in an ambitious, 20-year project to create a local reuse source. The Pure Water project will ultimately provide 83 million gallons a day (MGD) of indirect potable reuse water.

In this interview, Amy Dorman, deputy director of San Diego’s Public Utilities Department, speaks with Municipal Water Leader Managing Editor Joshua Dill about the motivations behind Pure Water, how the city is paying for the project, and the importance of public outreach.

Kris Polly: Please tell us about your background and how you came to be in your current position.

Amy Dorman: My undergraduate degree was in mechanical engineering, but I have worked in civil engineering my whole career and have focused on water almost entirely. Over the last 10 years, I branched out into water reuse. I have a master of business administration, which has helped me move into supervisor and managerial positions with the City of San Diego. Today, I am a deputy director for the city’s Public Utilities Department. The City has been on the path of pursuing reuse for a few years, starting with early feasibility studies. Now we’re in the final design of the first phase of Pure Water. My position was recently created in anticipation of full-scale operations after we complete construction of the first phase of the Pure Water facilities. I’ll be building up that division.

Kris Polly: What were San Diego’s water sources before the introduction of the Pure Water facilities?

Amy Dorman: San Diego has a population of about 1.3 million people. Our service area covers about 400 square miles. We have three large water treatment plants. We depend on imported water for an average of 85 percent of our annual needs. We primarily import untreated water, because we have treatment capacity to meet our full demand. The system is pretty complex. We have close to 130 pressure zones and lots of pump stations, reservoirs, and regulating stations. We also serve a couple other water agencies, including the City of Del Mar and a retailer called California American Water Company in the southern part of the San Diego region.

Pure Water is a dual benefit program. San Diego needs to develop more local water and reduce its dependence on imported water. Reusing our highly treated wastewater creates a significant local supply. In total, Pure Water will take 20 years to implement. We’re in the process of designing and building the first phase, which will have a capacity of 30 MGD; ultimately, we want to get up to 83 MGD, which would cover around one-third of the city’s water needs. This will greatly reduce flow to the Point Loma facility. We are under constant pressure, especially from environmental stakeholders, to reduce our ocean discharges from Point Loma. They would like for us and other coastal dischargers to eliminate those discharges entirely. Pure Water doesn’t get us to zero, but it is a significant move in that direction. In the late 1990s, we opened our first water reclamation facilities, so we do also serve purple-pipe customers with nonpotable recycled water.

Kris Polly: What is the motivation for reducing imports? Is it a matter of cost?

Amy Dorman: Cost is a big reason. Since the early 2000s, the cost of imported water has tripled. With the recent drought cycle, it’s become clearer not only to the department but also to the general public that water is a scarce resource. During the 2012–2016 drought, the governor actually instituted mandatory cutbacks. This really highlighted the fact that we need to be more sustainable and self-sufficient when it comes to water. The uncertainty and reliability of our imported supply is an issue, too.

Kris Polly: Is the water you discharge into the ocean already purified?

Amy Dorman: No; Point Loma is an advanced primary treatment facility. We’re not meeting full secondary requirements, though we’re close. The National Pollutant Discharge Elimination System permit that we have for Point Loma has a waiver attached to it that allows us to continue operating with the current system.

Kris Polly: Please tell us about the overall Pure Water program and what it’s going to look like at the end of its 20-year implementation.

Amy Dorman: Our existing reclamation plant takes the water to a level where it can be used for nondrinking purposes. That is the starting point for the purification process. We will then take that already-treated water and run it through an advanced, five-step purification process: ozone, reverse osmosis, advanced oxidation, biological filters, and membrane filtration. After those five treatments, the water will be similar to distilled water. It will then be placed in the surface reservoir that serves our largest water treatment plant, so it will get one more round of treatment before it is distributed to customers. That’s to comply with the regulations. The state regulators are adamant that because this water originated as wastewater, we not only have to have all these treatment barriers in place to keep constituents out of the water supply system, we also have to have an environmental barrier, which in this case is the reservoir. The water is diluted in the reservoir and stays there for a period of time that allows us to respond to any occurrences or issues in the upstream treatment process. That’s the basic layout of the facilities. We will replicate that at additional locations in the city in future phases.

Kris Polly: Is the Pure Water system already operating in part of the city?

Amy Dorman: No, the only thing that is currently in operation is the purple-pipe system, which delivers nondrinking recycled water. As for water purification, we are done with the design of the first phase of Pure Water and hope to start construction on the facilities next year and be up and running in the 2024–2025 time frame.

Kris Polly: How has the city gone about financing this? 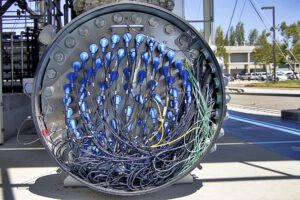 Amy Dorman: We have multiple sources. Last November, we signed an agreement with the U.S. Environmental Protection Agency for a loan of over $600 million under their new Water Infrastructure Finance and Innovation Act program. We have also pursued revolving funds, which are low-interest loans from the state. The state has allocated $646 million to Pure Water; the next step is to finalize our loan agreement with it. Combined, those two sources provide the financing for almost the entire program. We may also pursue short-term commercial paper.

Kris Polly: Was San Diego inspired by any other municipality or any other project when you came up with this idea?

Amy Dorman: Orange County Water District, based about 100 miles north of us, began operating a similar system in 2008, the Orange County Groundwater Recharge System. It also takes wastewater that’s been treated to the secondary level and then purifies that. Its environmental buffer, instead of being a reservoir, is a huge groundwater basin. It stores its purified water in the groundwater basin and then takes it directly from there to serve its customers. The system began operation in 2008 and has been expanded once. Ultimately, Orange County wants to bring it to 130 MGD. To have another agency going first has been helpful. There are differences between our systems, but there is a lot we can learn from them.

Kris Polly: What is the public’s opinion about this program?

Amy Dorman: In 2009, we embarked on a feasibility study to see if this concept made sense. Public acceptance was a major hurdle to overcome. We kicked off a citywide outreach and education program in 2010 and did a lot of community and business group presentations and attended community events. We also have a small, test-scale facility that has been open to tours since 2011. For the last 4 years, we’ve been able to allow people to taste the treated water at the test facility. It’s a really popular thing. We’ve been reaching out to as many people in the public of different demographics as we can for the last 10 years. It’s been really beneficial. We piggyback on our local wholesaler’s public surveys, which it conducts every few years. In the early 2000s, the appetite for this concept was low, in the 20 percent range. A few years into our outreach program, the level had tripled. We have a level of support from the public and our elected officials that is unusual for a city project like this. We don’t often come across people anymore who are strongly opposed to it. Most people want to know why we can’t do it sooner and why we have to put the water into a reservoir instead of using it directly.

Not only is Pure Water broadly supported, there is a group of people in town who took the initiative to form a Water Reliability Coalition. When we started our feasibility studies, there wasn’t the support from elected officials that we enjoy now. The heads of the San Diego Coast Keeper, which is an environmental group, and San Diego County Taxpayers Association got together and discussed ways to support water reuse. They gathered up to 30 business and environmental organizations that supported Pure Water. They speak on behalf of all our contracts when we bring them forward for the approval of the City Council. Having an independent, nonstaff group of stakeholders who are well respected in the community has been helpful for us.

Kris Polly: How have legal restrictions on indirect and direct potable reuse been changing over the last few years?

Amy Dorman: Pure Water is an indirect potable reuse project. In June 2018, the state finalized its regulations for what we’re doing now—augmenting a reservoir with purified

water. Now there are established regulations that we are able to follow and comply with. Indirect potable reuse has been in practice in the state of California for quite some time now. The Orange County groundwater recharge project I mentioned is also indirect potable reuse.

In 2016, the state finalized a feasibility study on direct potable reuse and concluded that it could establish regulatory criteria for direct potable reuse, but that there is also a lot of follow-on research that has to be done first. That research effort is underway now. We may see regulations on direct potable reuse by 2023. No one anticipates that the state will allow what we call pipe to pipe—delivery straight from the purification process into the distribution system—at least for the initial projects. It will probably require that the water go from the purification process to a conventional water treatment facility before distribution.

Kris Polly: Tell us about the bigger picture of Southern California water reuse. Why is there so much activity in this sector now?

Amy Dorman: I think it has to do with the cost and reliability of imported water. Southern California water providers are heavily dependent on imported water and have recently had to instate mandatory conservation. That has highlighted the need to try to establish local sources of water in earnest. Through the years, everyone’s been doing conservation, and we’ve stepped it up by providing nonpotable recycled water, but even with all that, we had to implement mandatory conservation during recent droughts. As a result, a lot of the agencies in this area, including Monterey, the Los Angeles Sanitation Districts, and the City of Los Angeles, are pursuing water reuse. There’s a need for it, the technology has been proven, and the general public is in favor.

Kris Polly: What advice would you have for other municipalities that are considering a project like this?

Amy Dorman: To focus on their customers, educate their customers, and make sure that there’s transparency and that they’re aware of what’s involved. For us, having a test facility that customers could visit to see the equipment in operation and to taste the water was really helpful for increasing awareness and acceptance of the product. The technology is well proven, but public acceptance differs from community to community and requires early focus.