Providing clean drinking water to nearly 2.5 million people in a region accustomed to less than 15 inches of precipitation annually is no small feat. Through its commitment to long-term planning and infrastructure investment, the Orange County Water District (OCWD) has done just that. OCWD wholesales groundwater to retail water agencies that serve Orange County. This year, OCWD is commemorating the 10th anniversary of the Groundwater Replenishment System (GWRS), the world’s largest potable reuse project.

OCWD has developed a diverse supply portfolio to keep its aquifer healthy and bring stability to its storage and distribution system. The primary sources of supply for the basin include Santa Ana River flows, rainfall, the GWRS, and imported water from the State Water Project and the Colorado River. The GWRS, which is a joint project of OCWD and the Orange County Sanitation District (OCSD), alone generates enough water for 850,000 residents.

OCWD General Manager Mike Markus, PE, knows the ins and outs of the GWRS. This year, Mr. Markus will be celebrating 30 years with the district. Over the span of his career, he oversaw the final design and construction of the original 70-million-gallon facility, as well as its subsequent expansion. Municipal Water Leader’s editor-in-chief, Kris Polly, spoke to Mr. Markus about the expansion of the GWRS, the value of infrastructure investment, and how to get big water projects done. 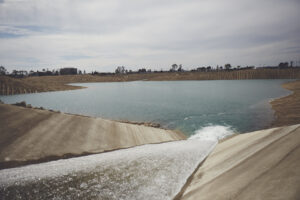 Mike Markus: We manage a very large groundwater basin in central and northern Orange County that currently provides 75 percent of the total water demand of 2.5 million people. Here in Southern California, we only get about 14 inches of water a year. It is up to OCWD to capture and recharge as much water as we can, so we don’t overdraft our groundwater basin.

We have different sources of supply into the groundwater basin. First, we have flows from the Santa Ana River. There is actually a river in Southern California that has water in it year round—in the upper Santa Ana watershed, treated wastewater is discharged into the river. The wastewater flows downstream and becomes a source of supply for the groundwater basin. We get around 20 percent of our supply from Santa Ana River flow.

In an average year, we get another 20 percent of our supply from incidental recharge—natural rainfall that percolates down into the groundwater basin. We also have a bit of stormwater capture. There is a large dam that is owned and operated by the U.S. Army Corps of Engineers in the Santa Ana Canyon along the Santa Ana River. We have a cooperative agreement with the Corps to store water behind the dam during the flood season to a certain level, slowly release it, and capture it further downstream. That becomes a source of supply into the basin as well. There again, it has to rain in order to capture that storm flow, which adds an additional 10 percent.

We also purchase untreated, imported water from the Metropolitan Water District of Southern California. Twenty percent of our supply typically comes from that.

Kris Polly: Please tell us about your recycled water system.

Mike Markus: Our recycled water system is called the Groundwater Replenishment System. The project takes treated wastewater—secondary effluent that otherwise would be discharged to the ocean—through an advanced purification process consisting of microfiltration, reverse osmosis, and ultraviolet light with hydrogen peroxide. Once it has gone through that process, we inject about one-third of the water into a seawater barrier along the coast and pump the remainder up into our recharge basins about 17 miles away. All that water becomes a new source of supply for the groundwater basin. The project currently produces 100 million gallons per day.

OCWD’s original 70-million-gallon-a-day facility went into operation in 2008. We completed a project to add capacity for another 30 million gallons a day in May 2015. We are in the process of expanding the facility to its ultimate capacity, which will be 130 million gallons per day. We just started the final design of that last 30-million-gallon increment earlier this year. We’ll complete the design by the end of the year. We plan to be in full operation by the first quarter of 2023. 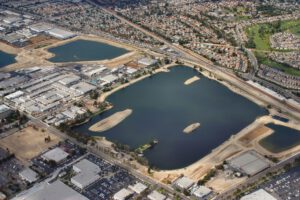 Currently, the recycled water program provides about 30 percent of the supply of the basin. We own about 1,200 acres of land in northern Orange County, which is a heavily commercial and industrial area. We converted that land into recharge basins—essentially, large lakes for percolation. In that part of the county, the geology is such that the sands and gravel of the aquifer extend to the surface of the ground. So, if you dig a big hole in that ground and put water into it, the water will naturally percolate down into the basin.

The rate of percolation depends on the water source. We pump a good portion of our recycled water from Fountain Valley to along the coast through a 17-mile pipeline up to Anaheim in the northern part of the county and our recharge basins. That water is high quality, so we get percolation rates of up to 10 feet per day.

With our other basins in that area, it is typically Santa Ana River water, so that water has a certain degree of sediment in it. We get lower rates of percolation in the other basins that take the river water. The solids settle in the bottom of the basin and clog it.

We do have additional infrastructure along the Santa Ana River to divert flows off the river into our recharge basins. We have installed two inflatable rubber dams that are 7 feet in diameter. When inflated, they span the width of the river, which is 300 feet, diverting water into the recharge basins by gravity.

We also have equipped all those deep basins with pump stations. So, if those basins clog, we have the ability to dewater the basins, dry them out, and move the sediment with scrapers. That helps restore the percolative capacity of the basins. 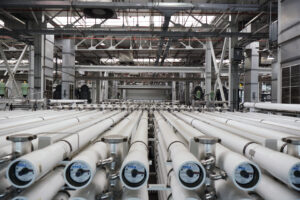 Kris Polly: There are a lot of pieces to the puzzle.

Mike Markus: There are a lot of pieces, but they have helped build a complete supply picture with a large degree of water supply reliability. So, when it rained last year, we substantially refilled the basin. Yet, when it is really dry, we’ll overdraft the basin.

We are a nonadjudicated groundwater basin. Our board of directors determines how much pumping should occur on an annual basis. If we were in a 10-year drought, we would probably have to decrease the amount of pumping to avoid a severe overdraft.

Mike Markus: We were compliant with the law before it was enacted. We actually helped write the legislation. We don’t have to change one thing that we do under the Sustainable Groundwater Management Act.

Kris Polly: How has OCWD financed the development of the GWRS, as well as its infrastructure projects in general?

Mike Markus: For the first phase of the GWRS, we were able to obtain $92 million in grant funding for a $481 million project. Of that $92 million, $67 million came from water bonds—the remainder of the project was funded with a loan from the state through its SRF [State Revolving Fund] program.

For the first expansion of the treatment plant, which was a $141 million project, we received a $1 million grant through a Proposition 84 water bond, and the rest was financed through SRF loans. For our final expansion, which is $240 million, OCWD is in the process of applying for a WIFIA [Water Infrastructure Finance and Innovation Act] loan, which will finance 49 percent of the project. We are hopeful that we can get the rest through an SRF loan. If that isn’t available, we are a triple A–rated agency, so we can borrow money at fairly low cost.

Our other infrastructure projects are financed through our rate structure. We run a pay-go program, so we have a certain amount of funding on an annual basis. We tap that for smaller construction projects.

OCWD also has a refurbishment and replacement fund, which is a reserve fund for the replacement of assets. Through annual contributions to the fund, we are able to replace our aging infrastructure each year. We replace treatment equipment, such as microfilters and reverse osmosis membranes, on a fairly short time scale. The fund allows us to make those replacements without spiking the rates.

Kris Polly: How does the Mid-Basin Injection Project fit into your system?

Mike Markus: It is a basin management project. We are building a series of injection wells and supplying them with GWRS water from our GWRS pipeline. 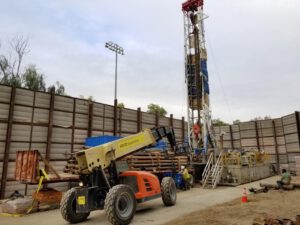 Kris Polly: What other large infrastructure projects are planned for the future?

After that, we are really in refurbishment and replacement mode—small projects here and there to help optimize our recharge capabilities and keep up our existing infrastructure.

Kris Polly: You have been successful at obtaining and leveraging grants and loans to complete major infrastructure projects. What is your advice to other water managers seeking to do the same?

Mike Markus: In the past, everyone was always looking for grant funding. It has only been recently that people have started to look at the SRF program as a substantial means of funding. That program really needs to be taken advantage of. The way the SRF is set up in California, we can get an SRF loan for half the general obligation rate. So, through the SRF we are looking at 1.8–2.2 percent loans that fund 100 percent of a project. I would advise other water agencies to look at maximizing loans available through the SRF program.

I think what we need to do is look at innovative programs at the state and federal level to lend water agencies the funding they need to build their projects at interest rates lower than the market.

Kris Polly: Beyond financing, what key lessons have you learned from projects like the GWRS and its expansion?

Mike Markus: It takes a lot of stakeholder involvement early on in the project. You need the support of your elected officials to move forward. And, for the GWRS, because it was recycled water that people would ultimately be drinking, we started very early on with our public outreach. Ultimately, you have to be able to show the need and that the project makes sense.