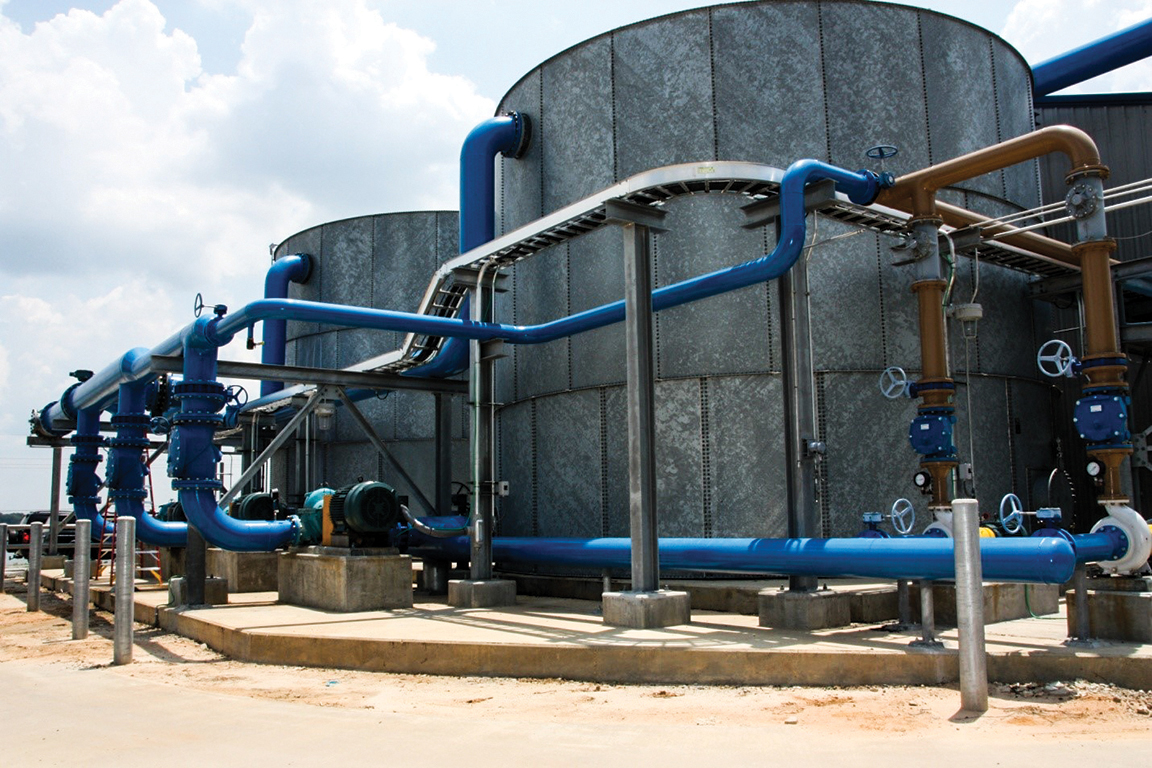 he West Monroe Public Works Department provides potable water and wastewater services to West Monroe, Louisiana, and its environs. During the 1990s, West Monroe became aware that the regional Sparta aquifer was being depleted at a rate of 18 million gallons a day beyond the recharge rate. In 2012, the city took a huge step toward remedying this problem with the opening of its Sparta Reuse Facility. The facility provides 5 million gallons of water a day to a local paper mill, cutting the mill’s groundwater consumption in half. This accomplishment has been recognized with numerous awards, including the 2012 White House Champions of Change award, the 2015 WateReuse Large Project of the Year award, and three international awards from the Green Organisation. In this interview, Terry Emory, environmental quality manager at the West Monroe Public Works Department, speaks with Municipal Water Leader Managing Editor Joshua Dill about the accomplishments of the reuse facility and what it can teach other municipalities. 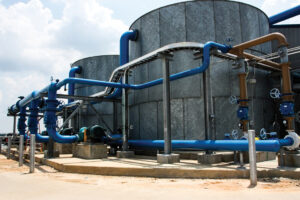 Terry Emory: I started with the City of West Monroe in August 1994, somewhat accidentally. I was between jobs and took a part-time position with the city doing tasks like data entry, environmental paperwork, and discharge monitoring reports. Then the city had somebody leave and needed a class 4 operator. They asked me to take the tests, and I passed them and got the position. In 2004, the previous superintendent left the city, and I was promoted to environmental quality manager. I run the water treatment plant and the sewage treatment plant and handle any kind of environmental permit that the city has.

Joshua Dill: Does the City of West Monroe Public Works Department provide all the water services for the city?

Joshua Dill: Where does the city’s water come from?

Joshua Dill: What was the initial motivation for establishing the Sparta Reuse Facility? 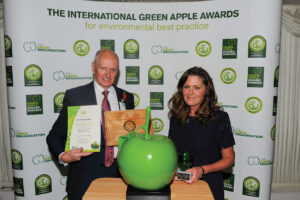 Terry Emory: The motivation behind it was the depletion of the Sparta aquifer. The Sparta aquifer is a large aquifer that reaches into Mississippi and Arkansas. In North Louisiana, there are 17 parishes that use the aquifer as their primary water source—for drinking water and for water for irrigation and industrial uses. The aquifer was being depleted at a rate of 18 million gallons a day beyond its recharge rate. The static water level in the region’s wells was rapidly dropping, and we were starting to see some saltwater intrusion from the saltwater layer that lies underneath the aquifer. West Monroe is at the eastern edge of the aquifer, and we were seeing higher increases in fluoride and bromide levels than water users in the western portions of the aquifer.

During the 1990s, we started working on a plan to recycle the wastewater from a wastewater treatment plant to send to the plant for use as process water. The biggest catch, though, was that Graphic Packaging makes food- contact paper. As a precondition to taking part in this project, they stipulated that the water had to meet every primary and secondary drinking water standard established by the U.S. Environmental Protection Agency (EPA). So we built a pilot plant, and because the characteristics of our effluent change significantly on a seasonal basis, we ran it for 1 full year to prove that we could run it successfully year round. The pilot plant produced 1 million gallons a day. We signed a contract with the paper mill in 2009 and completed the construction of the Sparta Reuse Facility in January 2012. We built it to treat 10–12 million gallons a day. We started sending the mill water on April 30, 2012, and we have been able to consistently meet its standards and send it approximately 5 million gallons every day. It cut the mill’s consumption from the aquifer in half. What we’d like to do now is to tie some of the smaller treatment systems in our area into our system so that we receive the mill’s effluent flows and can treat and send up to 10 million gallons a day to the mill, eliminating its reliance on the aquifer altogether. We recently got some funding for that. 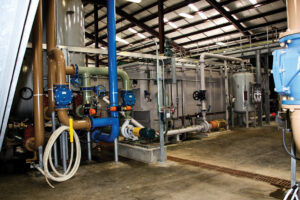 Joshua Dill: Where did the funding for the construction of the facility come from?

Terry Emory: The total cost of the plant, including the pipeline to the paper mill, was $20.5 million. Of that, $17 million came from various sources, including state capital outlay money, grants from the Louisiana Department of Environmental Quality (DEQ), and federal stimulus money for green projects. The balance of that was split between the City of West Monroe and West Ouachita Sewer District Number 5.

One of the things that made this project economically feasible was the proximity of our sewage treatment plant to the paper mill. The properties joined and the only obstacle was a levee that we had to cross. The pipeline, which is just less than 1 mile long, cost $2 million. For projects that require longer pipelines, the cost can be prohibitive.

Joshua Dill: What method does your reuse facility use to purify the water?

Terry Emory: Our existing sewage treatment plan is a completely biological process, involving two 50-acre oxidation ponds that go to rock filters. From there, the water is chlorinated, disinfected, and dechlorinated. At that point it used to be discharged into the Ouachita River. Now, however, all the water from that discharge point goes to the Sparta Reuse Facility. There, the first step is a flocculation tank where we add a polymer. At this point, the biggest thing that we have to remove is algae. It’s hot down here, and algae is a big problem. The polymer makes the algae clump together better. From there, the water goes to dissolved air flotation units so that the algae can be skimmed off the top. From there, the water goes to activated carbon units, and then out to two 100,000-gallon storage tanks, where it’s chlorinated and sent to the paper mill.

Joshua Dill: What have the results been with the aquifer?

Terry Emory: The results have been great. The U.S. Geological Survey (USGS) has a monitoring well of a depth of about 800 feet at the paper mill that had been showing a lot of saltwater intrusion years ago. I believe the paper mill abandoned the well for that reason—the water had become salty enough to damage its equipment. The latest information I received from USGS was that the static water level in that well has risen by 47–50 feet since 2012. The levels of fluoride, bromide, and conductivity have improved, which indicates that the freshwater level is increasing and pushing back the salt water. 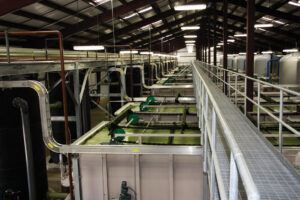 Joshua Dill: When you were considering this project, were you inspired by projects in other regions of the United States?

Terry Emory: No, not really. In terms of the treatment process it uses and its fulfillment of all primary and secondary EPA drinking water standards, this facility is the only one of its kind in the United States. We were actually inspired by two plants in Africa—one in South Africa, which is also sending its water to a paper mill for use as process water, and one in Namibia, which is blending its treated water back in with the region’s small amounts of potable water and using it for drinking water.

Joshua Dill: Have you considered recharging the aquifer?

Terry Emory: We’ve talked about doing that in the future. We actually built the plant in such a way that we could install two more units and treat up to 12 million gallons of effluent a day, if we could get that much. At that point, we would have excess water that we could use to recharge the aquifer. I would say that’s pretty far down the road.

Joshua Dill: Would you tell us about your use of renewable energy?

Terry Emory: We got a $1.2 million grant from the Louisiana DEQ last year to build an 880-panel solar farm to help run the water reuse facility. It’s the largest municipal installation in the state. We predict that it is going to reduce our electric bill by about 20 percent.

Joshua Dill: What is your advice for other municipalities that are thinking about implementing similar projects?

Terry Emory: This would be a great project for any municipality. As I mentioned, proximity to the end user is important. Pipe can be extremely expensive, especially if you need to install it under railroad tracks or in other difficult areas.

Terry Emory is the environmental quality manager at the West Monroe Public Works Department.
She can be reached at temory@westmonroe.la.gov.