Menu
Large water and wastewater utilities have been using supervisory control and data acquisition, or SCADA, systems for years. However, due to the cost and complexity of traditional systems, realizing the benefits of SCADA has been out of reach for many rural and small-town agencies. The good news is that newer, proven technologies are making SCADA less costly, simpler, and more reliable, and therefore, easier to justify. Two such technologies are cloud-hosted SCADA and cellular telemetry communications to remote sites.

In addition to viewing the devices and process variables described above, SCADA allows qualified personnel to manually override the automated controls, if warranted, to start and stop pumps, or to adjust speeds, flows, levels, and other settings. SCADA also allows operators to view and acknowledge critical alarms and alerts generated by the system.

The major benefits of SCADA are better visibility into, and control of, critical water and wastewater operations. Graphical status screens show the state of pumps, reservoir and clarifier levels, and other important variables in real time. Operators are alerted to plant upsets within seconds. SCADA-logged historical records can be used in lieu of, or as validation for, manually collected data required by regulatory agencies.

As stated above, complexity, cost, and reliability of traditional SCADA based on older technology, can put it out of reach for many rural and small-town agencies. Traditional systems typically have SCADA software installed on computers at agencies’ central locations. These computers store data on their internal hard drives, which require additional hardware and procedures to back up and restore process information and the SCADA software itself, if necessary.

Radios used to communicate with remote terminal units (RTUs) at remote sites have installation requirements that can involve tall antennae and other physical and electrical considerations to ensure reliable communications. In addition to installation concerns, radios require regular maintenance and repair or replacement. Winds can cause antennae to get misaligned, and nearby trees may need to be trimmed so they don’t interfere with reception. 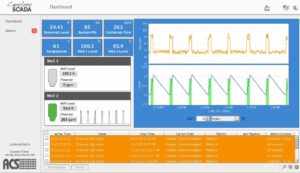 Traditional SCADA systems have high up-front costs compared to those based on current technologies. Software licensing, high-end computers, remote and base radio equipment, leased lines, and installation all add up to significant, budget-busting amounts. These costs apply to new installations as well as to upgrades of existing ones.

Although computer hardware has become more reliable in recent years, it is still subject to environmental and electrical mishaps. As we saw in the winter of 2016–2017 in Idaho, roof collapses and flooding were ever-present possibilities. Fires and electrical power outages and surges at the SCADA computer’s location can cause the system to be nonoperational for short or extended periods of time.

Cloud hosting installs the SCADA software and the computer it runs on at the hosting provider’s secure, protected, and remote facilities, while allowing agency employees to use it from their central location or on laptops and mobile phones, wherever they are. All SCADA functionality is accessed by browsing to a secure website located on the hosting provider’s servers.

Instead of installing a high-end computer and expensive software (that require maintenance, upgrades, repair, and backup procedures), all a cloud-hosted SCADA computer needs is the ability to browse the internet. Computer maintenance is almost nonexistent at the plant site, and software upgrades are installed by the hosting provider at its site. Agency computer repairs, if needed, are usually just a matter of replacing the defective unit, with no interruption to SCADA functionality.

The initial installation costs for cloud-hosted SCADA are typically 40–50 percent of the cost of traditional systems. Traditional systems require ongoing maintenance, upgrade, and expansion hardware and software expenditures, plus the added cost of information technology support to implement them. Cloud-hosted SCADA providers can troubleshoot remotely. Cloud-hosted SCADA systems are located in secure data centers and installed on high-availability server-class computers with fail-safe redundancy. Data are backed up on a regular basis.

Installing an RTU with cellular capability is less expensive than radio or leased-line telemetry systems. Cell-based systems keep already-low data costs even lower by sending data in small packets and only on request or by exception. Cellular telemetry is more reliable than traditional systems. Storms, wind, and line-of-sight obstacles have very little, if any, affect on availability and uptime. Cell towers have backup power systems that keep them online during power outages at the tower site. 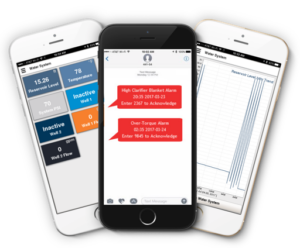 The city of Payette’s water system had been controlled by a traditional SCADA system for 12 years. The equipment employed RTUs comprising signal cards and radios. They communicated through radios back to a central computer that ran SCADA software. All control system operations were performed by the central computer.

Five years ago, the Federal Communications Commission mandated that all public and emergency radios transmit over narrow-band frequencies. The city converted all its radios to narrow-band equipment. The new radios proved unreliable, and communications between the central computer and the RTUs were frequently lost. When this happened, the RTUs would not turn on the pumps that replenished reservoir and tank water.

Additionally, the central computer was unreliable and would freeze, so that alarms could not be sent to the on-call operator. Also, pumps would stay in their last states until the computer was rebooted, which needed to be done twice a day.

In 2015, the city upgraded its traditional SCADA system to a cloud-hosted system that uses cellular telemetry. According to Water Superintendent Jacob Hust, “We went with Carefree SCADA, and have been very happy with it. It’s extremely reliable and has built-in fail over functionality, so if cellular communications go down, the system still operates safely. Communication interruptions are infrequent and short, and do not present much of a problem at all.”

“We also like the other benefits of cloud-hosted SCADA,” added Hust. “We don’t have to manage and perform updates or maintenance; that’s all handled by the SCADA provider, Advanced Control Systems.” Although there is a SCADA computer at the water shop, the city’s on-call technicians can also view and supervise water operations from their laptops in the field or their home computers by securely logging in to the system on the internet.

Payette’s original wastewater system had no SCADA computer. For 20 years, the city used hard-wired RTUs and analog radios for lift station and clarifier control. There was no alarming or notification of problems or upsets. And to make matters worse, the RTU vendor went out of business.

The city’s next step was to install a traditional SCADA computer in the shop, along with new PLC–based RTUs M and radios. That worked well for a few years, but complexity and reliability issues, as described above, eventually materialized.

A major problem for the plant was that the radio antenna, installed on a tall mast, had to be realigned frequently, and tree limbs impeding the line of sight required trimming on a regular basis. Finally, in 2015, cloud-hosted SCADA with cellular telemetry was installed. This system was provided by Carefree SCADA and has been operating reliably ever since.

Darwin DeCroo, wastewater superintendent, also relies on the alarm notification capabilities of Carefree SCADA to realize the same benefits. “Our on-call teams get alarm texts on their cell phones. The messages provide detailed alarm information, and the techs can acknowledge right from their phones,” said DeCroo. And, like their counterparts in the fresh water department, they can log in and troubleshoot from any computer with internet access, wherever it may be. 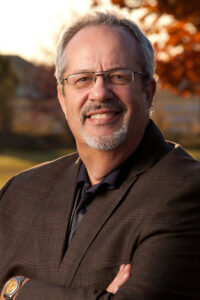