Mr. Heymann spent many years under the tutelage of former DC Water General Manager George Hawkins as head of the agency’s external affairs department. He brings DC Water’s spirit of shared ownership and collaboration to Blue Drop. Municipal Water Leader’s senior writer, John Crotty, spoke with Mr. Heymann about the logistics of rebranding a water agency and the services Blue Drop provides to water providers in need of help with communications. 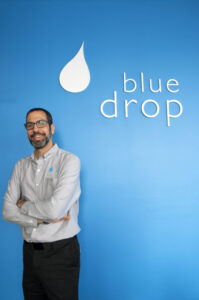 John Crotty: How did Blue Drop get started?

Alan Heymann: I joined DC Water in 2010 and worked under [former DC Water General Manager] George [Hawkins] for 3 years. I left to run communications for a national organization based in Gaithersburg, Maryland, and stayed there for 2½ years before coming back to the general manager’s team.

George and I stayed in touch during my absence from DC Water. We originally had this notion of marketing products and services on behalf of DC Water—mainly as a source of revenue, but also as a way to get better mileage out of the investments DC Water made in the things we are good at.

We specifically wanted to share our knowledge of external affairs and stakeholder engagement, which is what DC Water has really become known for in the water sector. Until recently, the water industry was stuck thinking that it was underground and should stay there, and it wholeheartedly believed that the only reason its members would interact with communications departments would be if there were a service disruption or if it was time to pay thebill. We quickly learned that this is not enough, especially if there is a reputation or a water quality issue at hand.

In response, we built the DC Water communications program from the ground up and received national recognition for our efforts. My purpose in coming back was to help build some sort of vehicle to put the lessons we learned from our own program to use and launch a consulting service. We ultimately added on market sales. In the end, we decided to launch a small company from within DC Water that became Blue Drop.

John Crotty: What was the state of DC Water’s communications department at the time you were beginning your efforts?

Alan Heymann: The agency was operationally sound. The previous general manager was an engineer and established significant expertise in the field. He did the right things to have the right people, but as you know, in the early 2000s, Washington, DC, had a lead crisis.

The bottom line is that there could have been a lot more done to communicate the risks of lead to customers. The agency’s reputation was in tatters as a result of that lack of communication. There was public mistrust. There was a notion that even though we are saying the water is safe to drink and that lead levels were at historic lows, that information was not good enough for the public. The reputation with customers had to be rebuilt, and the reputation with new customers moving into DC had to be built from scratch. We decided that the best way to do that was a systematic examination of our role in the customers’ lives. We needed to tell the utility’s story, rather than letting the utility’s story be told by someone else.

We did not have a good relationship with members of the media, which is a big problem if you are a public agency. We rebuilt all of that. We started having open houses for reporters. We built a community outreach team. We even held tap water taste tests. We rebranded the agency as DC Water. This started with a logo that even my then 2-year-old daughter could understand.

John Crotty: Would you say that this is a common story for agencies nationwide?

Alan Heymann: I think it is common. The good news is that most utilities do not have a lead crisis like DC had years ago. As such, they are starting from a slightly higher baseline, and it will be easier for them. There is a greater public expectation for utility leaders to have a social presence and to realize why it’s important to interact with customers. Nowadays, one does not have to work as hard to justify the creation of a communications team. Should utilities have more than one staffer based upon their size? Probably. It is a lot easier to justify the creation of communications positions than it used to be.

John Crotty: How does Blue Drop connect with water agencies in need of help, and what is the company’s process?

Alan Heymann: As you know, there are many associations that represent the water sector. Blue Drop is involved with most of them. We speak at conferences, reach out to our colleagues in the field, and rely on the strong connections George [Hawkins] fostered before we started this program.

Blue Drop is really a traditional consulting firm. Because we have a small staff, we can keep the cost down for our clients. Most of our clients have a problem, or a series of problems, that they need help solving. Generally, Blue Drop will work on a project for 3 to 6 months, although some projects last longer due to services being added.

From the onset, Blue Drop spends time gathering information and examining collateral, relationships, and stakeholder interactions. We interview members of an agency’s executive team and outside affiliates. We do a workshop with stakeholders to get consensus. We then pull all that information together for a report.

John Crotty: Do you have a success story you would like to tell our readership about?

Alan Heymann: We have a few! We finished up a project with Capitol Region Water (CRW) in Harrisburg, Pennsylvania. It was a great client for us, because it was the first time we could test our full range of services. Additionally, CRW is similar to DC Water. It is an agency independent from the city with a separate procurement system. However, it is about one-tenth the size of DC Water.

We were able to boil down some of the techniques we learned at DC Water to benefit CRW. CRW’s communications staffer told us at the end of the engagement that we accelerated CRW’s external affairs effort by a number of years in a matter of months.

John Crotty: What do you say to more-rural municipal entities that do not have as many resources to work with but would like to develop their communications efforts?

Alan Heymann: This is an area that is developing for us. We have done a couple of communications projects for RCAP [Rural Community Assistance Program]. RCAP helps small communities and water utilities improve.

Our goal is to pull services together for more than one client at the same time. We did something similar in New Jersey last year. New Jersey Future, a nonprofit, hired us using a foundation grant to help a group of utilities at the same time. In this case, it was combined sewer overflows in urban environments. So while it may be urban, the idea of combining is the same.

John Crotty: What are three things any water agency should have in its communications tool belt?

Alan Heymann: First, agencies should look at every customer interaction as an opportunity to pass along information. If they are sending a postcard to customers about the availability mandatory water quality report, they can use any extra real estate to get other information across. They must use the space they already have to communicate because it costs nothing extra.

Second, take advantage of technology to spread messages far and wide with less effort and costs. Have as much information on the website for people to read as possible and avoid a phone call.

I would not advise a small utility to dive into social media right away because it can be a pitfall. I like to say that having a free social media account is like having a free puppy. It requires a lot of love and attention. It can also be expensive and time consuming.

Third, the way you approach this depends on your community and your team. Let the community see you. If there is one big signature event in your community, you need to be there and be active. One way we did this in DC is by putting a tool on fire hydrants to provide people with cold tap water when they are at these events. That becomes a conversation starter.