Mo Ehsani, PhD, PE, SE, the president of QuakeWrap, is on a mission to help irrigators in the United States combat the aging of their infrastructure and use new technologies to advance their water delivery potential. Dr. Ehsani was a professor of civil engineering at the University of Arizona when he began his pioneering work with fiber-reinforced polymer (FRP) technology in the late 1980s. FRP is composed of a polymer (such as epoxy, vinyl ester, or polyester) that is reinforced with a fiber (such as carbon, glass, Kevlar, or basalt). The fiber is the main source of strength and stiffness for FRP. In the most commonly used application of FRP, fabrics of carbon or glass are saturated with epoxy resin in the field and applied to a structure—anything from a pipe or culvert to a bridge piling or a building’s foundation. After the epoxy cures, the FRP will have a strength about three times that of steel. Not only is FRP incredibly strong, it is lightweight and corrosion resistant.

Dr. Ehsani published the first paper on FRP technology in 1989 to praise from the scientific community. In 1994, after an earthquake in Northridge, California, Dr. Ehsani was contacted by engineers who wanted to use FRP technology to repair structurally unsafe buildings that were damaged in the earthquake. After the project was completed, he decided to establish QuakeWrap. Dr. Ehsani and QuakeWrap continued to take on small-scale projects for the next 15 years. 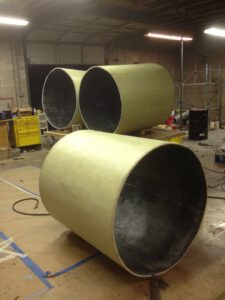 In 2009, Dr. Ehsani left the University of Arizona to focus his career on QuakeWrap, which has grown by over 50 percent each year since 2013. Not only does QuakeWrap now employ over 70 people in Tucson, split between the engineering section and the FRP construction section, it has expanded to offices all over the world.

QuakeWrap’s in-house construction section allows it to create custom-made solutions for every client and to handle the operational realities of every job from genesis to completion, which gives clients the ease of only having to deal with one company to complete a job. QuakeWrap’s InfinitPipe is a game-changing pipe-creation QuakeWrap’s Futuristic Materials Are Reshaping Pipe Manufacturing THE INNOVATORS technology. The beneficiary of a Small Business Innovation Research grant from the National Science Foundation, InfinitPipe is an onsite pipe-manufacturing process that uses FRP technology to create a pipe of any length and diameter desired. InfinitPipe has a number of advantages over traditional pipe: It does not have joints that are prone to leaking; it is corrosion resistant; it is significantly lighter than other pipe; and it is the world’s first green, sustainable pipe. InfinitPipe’s manufacturing unit can be loaded onto a flatbed trailer and hauled by a pickup truck to the job site so that the pipe can be created right there. By eliminating the significant costs associated with hauling conventionally manufactured pipes, this makes projects in previously infeasible locations possible.

QuakeWrap is actively looking to expand into the irrigation industry with InfinitPipe and a whole host of other FRP products. The company recently received a research grant from the U.S. Department of Agriculture for the use of InfinitPipe in irrigation districts. Dr. Ehsani believes that with QuakeWrap’s expertise and commitment to excellence, his company can change the landscape of the irrigation industry—and the landscape of the United States—for the better.