The Colorado River Water Users Association (CRWUA) is a nonprofit, nonpartisan organization that brings together Colorado River water users from seven states and one tribal organization to discuss common issues and to find cooperative solutions. This mission is particularly important given the historic drought conditions the area is suffering.

As well as being the executive director of the Southeastern Colorado Water Conservancy District, Jim Broderick is one of the three Colorado members of CRWUA’s board of trustees and, as of 2017, CRWUA’s president. In this interview with Municipal Water Leader Managing Editor Joshua Dill, Mr. Broderick discusses CRWUA’s origins and purpose and what its member states are doing to respond to the Colorado River drought. 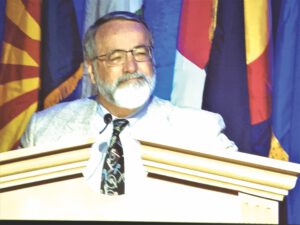 Joshua Dill: Please tell us about your background.

Jim Broderick: I am the executive director of the Southeastern Colorado Water Conservancy District. I have been here since 2003. I came from Arizona, where I worked in the water industry, specifically Tucson Water Utility. I came here because I was interested in large water operations, and Pueblo, where the district is headquartered, is my hometown. I thought it would be nice to come back to Colorado.

Joshua Dill: Tell us about CRWUA and its history.

Jim Broderick: CRWUA was organized in 1945 for the sole purpose of protecting the interests of all those who rely on the Colorado River system for water. It remains an organization committed to making certain that the participating states maintain an open dialogue on the issues through cooperation rather than conflict.

Joshua Dill: Who are the members of your organization?

Jim Broderick: CRWUA is made up of seven states and the Colorado River Indian Tribe Partnership. That includes Arizona, California, and Nevada with the Lower Basin, and Colorado, New Mexico, Utah, and Wyoming with the Upper Basin. Our board of trustees is made up of three

Joshua Dill: What are the issues that could lead to conflicts between the participating parties?

Jim Broderick: Any time you deal with a river the size of the Colorado, conflicts always arise when discussing floods or droughts, issues of not enough water or too much water, maintaining storage, and providing new storage and power. All those issues have to be managed collaboratively. One of the most interesting things about CRWUA is that the members are committed to shared ideas such as managing water for the good of all. They try to look at issues from all perspectives. It is a unique group on a local, state, and national level.

Joshua Dill: How many people live in the area CRWUA covers? 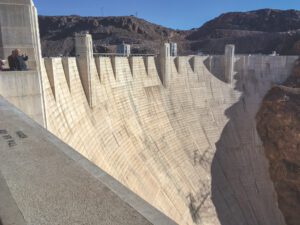 Joshua Dill: You said that education is an important component of your mission. Who is doing the education, who is being educated, and what are they learning about?

Jim Broderick: Traditionally, that occurs during our annual conference in early December. This year, there is a discussion of drought contingency planning in the Upper and Lower Basins. The other issue we are discussing is technology from other countries that could be viable in the region. We always look at how we can make our water infrastructure more efficient and more economical.

Joshua Dill: What are the respective proportions of your water used by municipal, industrial, and agricultural users? Have those proportions been changing?

Jim Broderick: Since the early days, water has always been linked to mining and to agriculture. In a lot of

states, agriculture takes up about 80 percent of the water; in others, it takes up about 90 percent. Municipal and industrial users take the remainder. That percentage will shift depending upon where you are.

The issue is that there is only so much water. So what happens if the balance shifts to the municipal and industrial side? In the old days, you could develop or buy the water you needed and be done. That is not as viable an option today. Today, you will always see a little more water transferred from agriculture. The main push and pull occurs between municipal and agricultural uses. That said, we are seeing a reduction in the amount of water used by municipal users in many states because of conservation and public awareness. The same can be seen in agriculture because of innovation and the changeover from flood irrigation to drip irrigation or sprinklers.

Joshua Dill: Do you exclusively manage surface water, or do you also deal with groundwater?

Jim Broderick: The Southeastern District supplies supplemental water from the Colorado River basin for municipal and agricultural uses in the Arkansas River basin through the Fryingpan-Arkansas Project. This is 100 percent surface water. Under Colorado water law, however, groundwater and surface supplies are intrinsically connected, and any tributary water pumped from the ground must be augmented with a surface supply. Return flows from the Fryingpan-Arkansas Project water are an important supply for well-augmentation groups.

Joshua Dill: Tell us about the drought conditions you have been dealing with recently, and the challenges they pose.

Jim Broderick: The historic drought conditions in the Colorado River basin are currently having very dire effects for our water supply. The decline in the amount of water we get from snow and rain has created a sense of urgency. Around 2000, the certainty and security of the Colorado River water supply started to be called into question. The entire Colorado River basin is in the worst hydrologic cycle of our history. Data collected from 2000 to 2018 show that we experienced the driest year on record in 2002, with the driest consecutive 2-year period on record occurring between 2012 and 2015. This can be seen in the levels of Lake Mead. Between 1999 and 2000, Lake Mead was 95 percent full; in 2018 it is 42 percent full. Data suggest this trend is likely to continue. 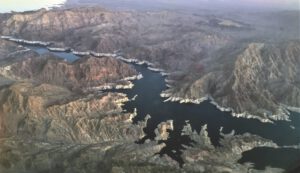 Joshua Dill: What measures have CRWUA and its members been taking to prepare for the worst-case scenario?

Jim Broderick: The worsening water supply within the Colorado River basin has increased the risk of a water shortage in Lake Powell serious enough to impede operations. It also threatens the ability of each of the Upper Basin states to fulfill mandated water rights within their respective states while meeting the delivery obligations under the 1922 Compact. The 1922 Compact and subsequent agreements require a rolling 10-year average of deliveries of 8.23 million acre-feet annually from the Upper Basin states.

Both these risks have serious implications for the Colorado River. The good news is that the Colorado River basin states, the U.S. federal government, Mexico, and other relevant stakeholders have developed drought-contingency plans (DCPs) to help minimize and mitigate the risks associated with the constant below-average water supply of the Colorado River.

The Upper Colorado River basin’s DCP is designed to protect the critical elevations at Lake Powell and to ensure continued compliance with the 1922 Compact. Its second purpose is to implement authorized storage of conserved water from the Upper Basin so that it can establish a demand-management plan in wthe future.

The Lower Colorado River Basin’s DCP, however, is designed to require Arizona, California, and Nevada to contribute additional water to the storage in Lake Mead and to create additional incentives to store water in Lake Mead.

All of this has occurred because the challenges have been greater than water managers anticipated when they negotiated the 2007 agreement. That agreement sought to establish criteria for shortages in the operation of Lake Powell and Lake Mead. Hydroelectric power as well as water supply at both these reservoirs is at stake if a balance is not maintained. So we have had to look at that again to see what we need to do.

Buereau of Reclimation Commissioner Brenda Burman has issued a call to action for the Colorado Basin states to adopt DCPs before the Lower Basin experiences water shortages, and she has asked them to do it this year. The charge from Commissioner Burman highlights what we are trying to get at. During the early years, they gained valuable operational experience. They have also learned what the guidelines are. That is where we are as we attempt to finalize the DCP.

Traditionally, we have been able to solve our issues by coming together as a basin, not as individual states or users. I think that we are in the process of getting that framework in place. The bigger question will be how do you implement the DCP. Those are some of the larger discussions going on in the basin states.

Joshua Dill: What other issues are you currently addressing?

Jim Broderick: There are all kinds of issues associated with water, but the big one the Colorado River has right now is getting through the planning effort to make sure we are prepared for the day when we may have to use them. The worst thing that could happen to us is not planning for it. Our member states have gotten the frameworks in place, and now it is time that we start to implement the plans.

Jim Broderick: My vision is a continued dialogue among the basin states to ensure we meet all needs. I think we would like to see better working arrangements so that every project or program encompasses municipal, industrial, agricultural, power, environmental, and recreational needs from the outset. From a water supply perspective, you will start to see people look at how to store water and push it out with new dams and reservoirs. California is building new reservoirs today. The other critical piece is infrastructure. Maintaining infrastructure in an operational state is essential. Lastly, I hope there is more dialogue between people, so that we can understand every facet of the issues. I think that the water industry, in a lot of places, has the opportunity to bring in new perspectives.

Jim Broderick is the president of the Colorado River Water Users Association and the executive director of the Southeastern Colorado Water Conservancy District. He can be reached at jwb@secwcd.com.