Not many water agencies have to grapple with 20,000-year flood events. Last August, Hurricane Harvey inundated much of southern Texas with record-breaking rainfall, posing significant challenges to drinking water delivery and wastewater treatment. The staff of the San Jacinto River Authority’s (SJRA) Woodlands Division, however, took those challenges in stride, providing seamless operations over the span of the storm.

SJRA oversees the water resources of the San Jacinto River basin across seven counties just north of Houston, Texas. SJRA’s Woodlands Division is a wholesaler of drinking water and wastewater treatment services to the Woodlands Joint Powers Agency (WJPA), which is the central management agency for the area’s 11 municipal utility districts.

As all tropical storms in the Atlantic Ocean do, Harvey started off the west coast of Africa. It veered west toward Mexico’s Yucatan Peninsulaand then dissipated. Three days prior to landfall on the Texas coast, its strength had reduced to below tropical storm level. The storm, however, quickly reorganized and made landfall in southern Texas, meandering its way up the coast and hammering it with record-shattering rainfall.

SJRA General Manager Jace Houston characterized the plight of water districts trying to gauge the size of the storm. “The storm very rapidly reorganized. It was only when it reached the southern coast of Texas that forecasts showed our area would get a lot of rain—10 inches or more. For our region, 2 days before landfall, rainfall was forecast to be 6–10 inches. It was a gigantic storm, but we didn’t have 2 weeks’ notice. We didn’t have that luxury.”

The Woodlands received 30 inches of rain. All its watersheds were at record levels. 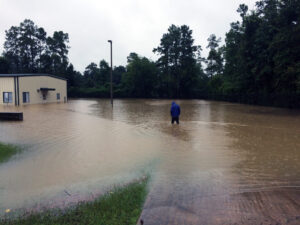 With the onset of the storm, the Woodlands Division engaged in its standard protocol for emergencies. Since Harvey was the third storm event in a 3-year time period to reach 500-year flood levels, SJRA had already raised some of its electrical equipment on a few of its lift stations.

Division Manager Chris Meeks explained SJRA’s emergency protocols. “We prepared staff the Wednesday before the storm and started 24-hour shift operations the day of landfall. We started those operations at 7:00 a.m. on Friday—half a day before landfall—so staff would know where they needed to be and who was going to be on. Before landfall, we checked all our chemical and fuel inventories and communicated with staff.”

Division Operations and Maintenance Manager Jason Williams added that SJRA made sure all the auxiliary generators were ready to go. “You try not to get any surprises from something that does not operate as it should. Our administration group also purchased supplies for the 24-hour shifts: food, cots, essentials,” he said.

Operations During the Storm

The Woodlands was inundated with precipitation. With respect to SJRA’s Woodlands Division facilities, its Wastewater Treatment Plant No. 1, which has a 2-hour peak capacity of 18 million gallons per day (mgd), reached a flow of 24 mgd. Its other two plants did not experience any peak flow issues. Mr. Meeks explained, “We use the collection system as extra storage during these events. We meter the flow into the plant to make sure we don’t have flow exceedences and overflows in the collection system.”

The Woodlands Division’s lift stations bore the brunt of Harvey’s downpour. However, even though Harvey was an off-the-charts storm event, SJRA was prepared. “Normally, one or two lift stations are susceptible to 500-year floods; in this case, it was nine. We already prepared for that kind of situation, using the same processes and procedures as a normal event,” said Mr. Houston.

The rain created some small, sporadic power outages within the Woodlands Division service area, leading to downed lift stations. The longest lasted around 4–4.5 hours. SJRA dispatched portable generators to those stations. SJRA staff watched and manned lift station sites with onsite generators to ensure that those stations operated as they should under emergency power. In some cases, they had to gut and rewire electrical panels.

Despite those challenges, both the water and wastewater systems in the Woodlands Division ran uninterrupted during the storm. Mr. Meeks explained, “On our water system side, there were no issues anywhere: no water main breaks, no flooded facilities, no major power outages. There was no change in service to the end user. It operated like it does every single day.”

“Our system ran like a champ,” said Mr. Houston.

Throughout the storm, SJRA kept in continuous contact with WJPA and the township. “We did not receive one call indicating that there was sewage or water in someone’s home. There were no calls for help to unclog drains or deal with fallen trees,” said Mr. Meeks.

The Woodlands Division was well positioned to address power outages during the storm. With eight electricians in its fold, the division is adept at addressing electrical issues in-house. That is not by chance.

The 45-year-old Woodlands system requires a good deal of maintenance. Over the last 5 years, the division has adopted SCADA technology to optimize the water and wastewater facilities, and it moved staff over to the maintenance department to maximize mechanical and electrical skills. The division also developed a collections and distribution group, which specializes in line work.

The investment in electricians has paid dividends over the years, especially during the storms. Mr. Meeks noted that if the division had relied on contractors to get the power running to the lift stations during the storm, it would probably still be waiting. “After being able to get out to the sites, everything that was down was back up and running at full capacity within 24 hours due to our inhouse staff abilities.”

The storm hit on a Friday, and by the following Wednesday, SJRA normalized operations. For SJRA, recovery fell well within its emergency plan. Once the division was up and running normal operations, Mr. Meeks gave his staff a day off, “not only to get their personal affairs in order, but also to de-stress from the situation and get a fresh mind.”

For the Woodlands Division, a critical element of the recovery is evaluating those lift stations that were submerged during the storm. Mr. Meeks explained, “Last year, we raised one lift station generator 8 feet in the air [1 foot above the 500-year flood elevation]. It went online the day that Harvey hit. That station flooded but did not lose power. We are using that lesson and elevating flood-susceptible station generators 1 foot above the 500-year flood elevation.”

The Woodlands Division also evaluated the effect of emergency operations on its staff. During the storm, Mr. Williams observed that as division staff came off intense 12-hour shifts, they lacked ways to unwind at the office. Management is now looking at ways to help staff unwind when they come off emergency operations shifts. “We can get parts and pieces, but good people are hard to find,” said Mr. Meeks. 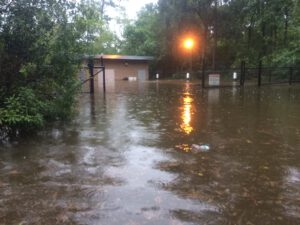 When considering storm preparation, Mr. Williams stressed, “Do not to assume because a generator ran last week, it will run during a storm. If you need it, fire it up before the event. It’s preventative maintenance.”

Mr. Meeks related that it was important to have a sufficient amount of parts in stock. “If it is on your shelf, you can go and grab it. If you have to rely on your supplier to have it on his shelf when 20 other people want that part, you are not going to be able to get it.”

On the recovery side, Mr. Williams advised that districts need to reset and refocus to return to normal operations. “[It is important] to get your guys back to normalcy— to focus on what you do, which is to treat water and wastewater and provide a high level of service to the customer. Once you get back in that routine, the recovery just falls in line with your day-to-day operations.”

Taggle: Gathering Water Meter Data From the Most Inhospitable Environments