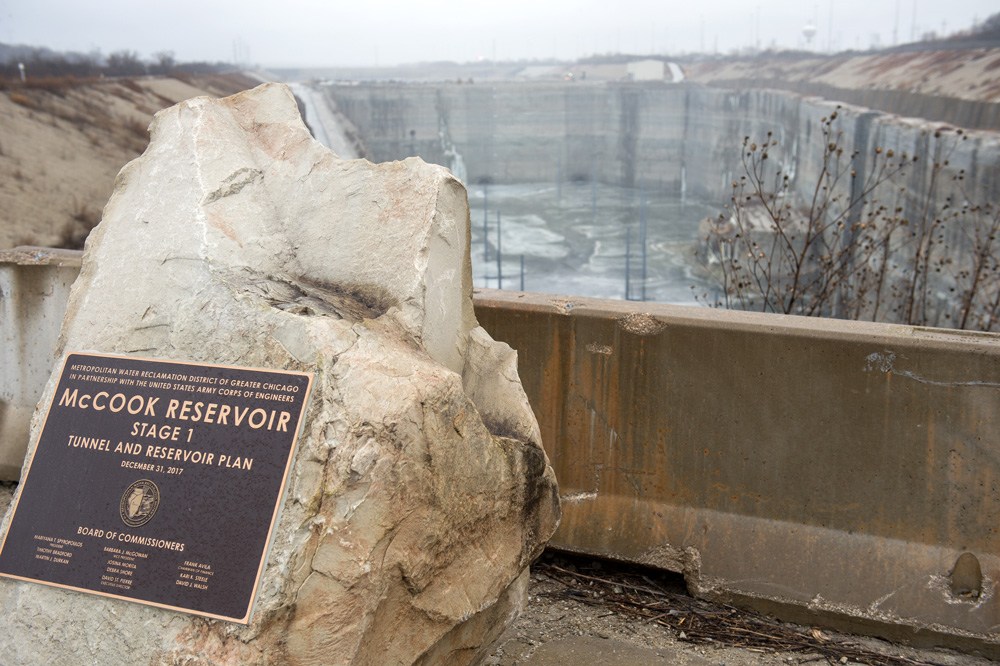 In early January, a winter rain brought an inch of precipitation to Chicago’s already-snow-covered yards and streets. The otherwise unremarkable rain marked an important stage in the Metropolitan Water Reclamation District of Greater Chicago’s (MWRD) Tunnel and Reservoir Plan (TARP): For the first time, stormwater entered MWRD’s McCook Reservoir on Chicago’s southwestern side. 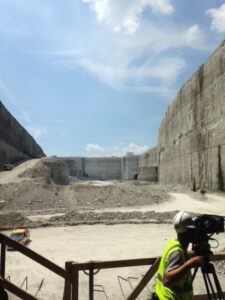 McCook Reservoir is more than 45 years in the making as a critical component of the TARP, MWRD’s long-term combined sewer overflow control plan. Phase 1 of the plan involved constructing 109 miles of deep tunnels and more than 400 drop shafts to capture combined sewer overflow near the Des Plaines and Chicago Rivers before it gets into the waterways. Phase 2 construction focused on the creation of three reservoirs—McCook is the last of those reservoirs.

MWRD began construction on the 3.5-billion-gallon (10,741 acre-feet) reservoir in 1999. The project involved excavating the site and connecting the existing deep tunnel system to the reservoir with subtunnels and gate structures. Two tunnels enter the reservoir, and a third takes the water out to a pump station.

The 33-foot-diameter mainstream tunnel extends from Wilmette, a northern suburb of Chicago, along the north branch of the Chicago River and down to the southwestern side of the city, under the Sanitary and Ship Canal and the Chicago River, to the reservoir location near Bedford Park. The other main tunnel, also 33 feet in diameter, follows the Des Plaines River from the town of Des Plaines on the northwestern side of the city down to the reservoir site.

The third tunnel drains the reservoir and connects it to MWRD’s existing deep tunnel pump station, so the polluted storm overflow can later be pumped back to the Stickney Water Reclamation Plant, the largest wastewater treatment facility in the world.

MWRD Managing Civil Engineer Kevin Fitzpatrick explained, “This project will capture and store combined sewer overflows and help reduce pollution and flooding. It is about preventing polluted water from backing up into basements and dumping into area rivers during a storm event.”

First, MWRD prepared the site for excavation. Mr. Fitzpatrick, who has been a part of the McCook project since construction started, explained, “We were going 300 feet below ground and first had to remove almost 10 million cubic yards of overburden before the site could be mined.” 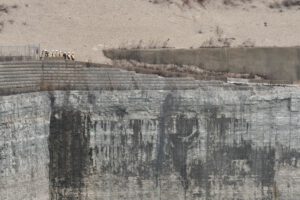 Next, MWRD negotiated a mining agreement with a local quarry operator. The agreement set the parameters for the operator to create what was to become the reservoir: the boundaries, the depth, the walls, the ramps, and the rate of mining (in this case, the rate at which they sell stone).

Given those requirements, MWRD covers the costs above and beyond the parameters of a normal mining project in order to bring the desired size and shape of the reservoir. For mining and selling the rock, the operator pays MWRD a small royalty. The operator started mining the stone in 2008.

MWRD staged the construction of the reservoir to bring some of the benefits online earlier. The first stage was completely mined 2 years ago and now is available to capture 3.5 billion gallons of water, or 35 percent of the total planned volume. The reservoir held this amount for the first time on February 19–20.

According to Mr. Fitzpatrick, “That is what we put online at the end of last year. While they are still going to be mining the rest, we’ll be seeing substantial benefits from the portion that they finished. They will be digging adjacent to the current site. Two tunnels will eventually connect the two holes so that they will fill and drain together.”

Sealing the reservoir was critical to its function. In partnership with the U.S. Army Corps of Engineers, MWRD constructed a double-row grout curtain around McCook—two rings of pressure-grouted holes spaced 5 feet apart around the entire 3-mile perimeter. The holes go down to an impermeable layer of shale about 350 feet below the reservoir. The grout is forced into the fractures in the rock, sealing up any cracks surrounding the reservoir. 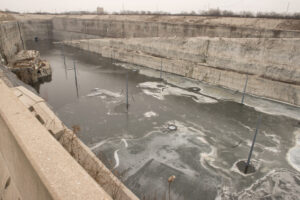 The reservoir’s location between the Des Plaines River and the Chicago Sanitary and Ship Canal also posed a challenge. Mr. Fitzpatrick said, “We didn’t want groundwater migrating from the rivers into the reservoir through the dirt above the rock we grouted. To prevent that, MWRD constructed a slurry wall, which is just a 3-foot trench filled with bentonite clay material, around the perimeter of the reservoir.”

MWRD projects the total cost of McCook Reservoir to be around $1 billion. Although much of the project is covered under a cost-share agreement between the MWRD and the Corps, MWRD had to cover all the costs for certain construction activities outside the agreement with the Corps, including the overburden removal and mining. Given the scope of the long-term project with a life expectancy of 100 years, MWRD was able to take out bonds at a very low interest rate to cover its share of the costs.

Mr. Fitzpatrick stressed the true value of McCook Reservoir. “The benefit-cost ratio on this project is above 3. It is a project built to last 100 or more years, serving a 250-square-mile area of Chicago and its suburbs and benefiting more than 3 million people. The project will have tremendous effect on our region. It’s projected that more than $140 million per year in flooding and pollution reduction benefits will be realized when the project is completed.”

Craig Milne: How Robots Can Improve Data Collection and Safety

Your Water Is Our Promise: How Coachella Valley Water District Launched Its New Public Relations Campaign