The Colorado River Water Users Association (CRWUA) helps coordinate the activities of the seven Colorado River basin states—Arizona, California, Colorado, Nevada, New Mexico, Utah, and Wyoming—as well as Indian tribes and the country of Mexico on the Colorado River. Each year, it brings water users together for a major conference at which each state and water user has a chance to make its voice heard. In 2020, the basin states will be implementing the drought contingency plan (DCP) that was agreed to in 2019 and will be looking forward to establishing new guidelines for 2026.

In this interview, CRWUA President Jim Broderick speaks with Municipal Water Leader about the organization’s history, present, and future.

Jim Broderick: I’ve been executive director of Southeastern Colorado Water Conservancy District since January 2003. The district is on the eastern plains of the Colorado and brings water from the Colorado River. The Southeastern District supplies supplemental water from the Colorado River basin for municipal and agricultural uses in the Arkansas River basin through the Fryingpan-Arkansas Project. Return flows from Fryingpan-Arkansas Project water are an important supply for well-augmentation groups.

Municipal Water Leader: Please tell us about your position at CRWUA.

Jim Broderick: I am currently the president of CRWUA. This is my second year of a 2-year term, so it is my last year. I was previously vice president. I’ve been involved in the recent drought contingency planning issues that Commissioner Brenda Burman called for at my first meeting as president. That mandate has guided what I’ve done over the last 2 years.

Municipal Water Leader: Please tell us about CRWUA and its history.

Jim Broderick: The Colorado River Water Users Association is an organization that has been around for a long time. It was organized in 1945 for the sole purpose of protecting the interests of all those who rely on the Colorado River system for water. It remains an organization committed to making certain that the participating states maintain an open dialogue on these issues through cooperation rather than conflict.

CRWUA is made up of seven states and the Colorado River Indian Tribe Partnership. The seven states are Arizona, California, and Nevada in the lower basin and Colorado, New Mexico, Utah, and Wyoming in the upper basin. Our board of trustees is made up of three members from each state and the Indian Tribe Partnership. The officers are the president, the vice president, the secretary, the treasurer, and the assistant secretary and treasurer.

About 40 million people are served by the Colorado River. The river is about 1,400 miles long. Some people have said that if it were its own country, the Colorado River basin would have a $1.4 trillion economy.

Municipal Water Leader: Are the states and the tribes the only members of CRWUA?

Jim Broderick: No, the members are all the water users associated with the states and tribes. If you register for the CRWUA conference, you are a member. Our membership is open to everyone interested in the Colorado River. This gives CRWUA the ability to provide our members input into what’s going on the river as it is happening.

Municipal Water Leader: In addition to the yearly meeting, does CRWUA hold other meetings throughout the year?

Jim Broderick: No. Traditionally, the education component occurs during our annual conference in early December. This year, there is an update and perspective on drought contingency planning in the upper and lower basins. The other topics we are discussing include interim guidelines; climate change; tribal water issues; the 150th anniversary of the John Wesley Powell expedition; the future of the West as seen through education, art, science and policy; and forecasting.

Municipal Water Leader: Is CRWUA funded by the member states?

Jim Broderick: Yes and no. The organization is funded through the registration fees for the annual conference. That money takes care of the conference itself and the necessary materials. All the trustees and committee members volunteer their time for the organization. The larger organizations help with printing and staffing for the conference. We also have sponsors for some of our larger functions. Almost everything we do is on a volunteer basis. Our members have a real interest in staying informed.

Municipal Water Leader: What are CRWUA’s top issues for 2020?

Jim Broderick: The top issues for 2020 involve the implementation of the DCPs for the different states. What will they look like, and what are the details for the stakeholders? Each one of the states will have to put together its DCP. The DCPs’ origins lie with the Colorado River Interim Guidelines for Lower Basin Shortages and Coordinated Operations for Lake Powell and Lake Mead, which the U.S. Department of the Interior, the states, and other stakeholders developed in 2007 to address the Colorado River’s deteriorating storage levels. The interim guidelines identify how to operate the two major reservoirs on the Colorado River—Lake Powell and Lake Mead—under hotter, drier conditions in order to share the risk of shrinking water supplies between the upper and lower basins. While the 2007 interim guidelines temporarily kept the basin out of crisis, the federal government needed states to put a more robust plan in place in order to protect interests that included water deliveries to contractors and tribal water rights. That led to the latest temporary plan, the DCPs, which negotiators say provide some security in avoiding a potential crash of the Colorado River system. Developing plans for each basin was hard, considering that within each state there are also competing interests and conflicts between urban and rural water users. Bureau of Reclamation Commissioner Brenda Burman, during the first CRWUA meeting of my tenure as president of this organization, pushed a deadline for the seven states to meet. In April 2019, federal legislators passed the Colorado River Drought Contingency Plan Authorization Act. In the meantime, the DCPs will help us bridge the gap to the next review. The DCPs and the 2007 interim guidelines both expire in 2026, and there is a provision in both the 2007 interim guidelines and the 2019 DCPs requiring that renegotiation begin by the end of 2020.

Municipal Water Leader: What role does CRWUA play in the implementation of the DCP?

Jim Broderick: The role of CRWUA is to ensure that all the stakeholders are involved and that information is being provided. CRWUA’s role is to be a forum for information. The important thing to realize is that the Colorado River is managed by the states, the Department of the Interior, and the stakeholders. The states and Interior are the entities that negotiate the management of the Colorado River. CRWUA was put together to allow the them to disseminate information on a basinwide basis. Water users, states, and water managers will grapple with the reality of a basin structural deficit where, even when there’s adequate snowpack and runoff, like this year, more water has been allocated than flows through the river.

Municipal Water Leader: Please tell us about the trends you see on the Colorado.

Jim Broderick: The climate will always have an effect on the Colorado, and it always has. The river has been in drought conditions for virtually the last 20 years. When a river starts to draw down its storage and it isn’t replaced, people get nervous. We have discussed the DCP as a way to start to regulate how people are using the water and how each basin and each state can help make that water go further. We must always keep drought in the front of our minds.

On a positive note, last year was a pretty good year for weather. The snowpack in the Colorado River basin was the highest it has been a long time. Water levels in Lake Powell moved up this year. We saw a pretty good spike. But water will always be scarce. People will continue to look for ways to manage water, make it go further, and use it efficiently.

Municipal Water Leader: Please tell us about some of the forecasting activities that have been done on the Colorado and how they are informing river management.

Jim Broderick: Forecasting is a wonderful thing. On the Colorado River, it has always been used as a way of reducing the risk of operations. The upper basin will hopefully be able to use forecasting to operate its reservoirs and maintain water levels in Lake Powell. As demand starts to develop, the upper and lower basins will try to figure out activities to help equalize the connection between Lakes Powell and Mead.

Every state, as well as Reclamation, looks at the river and has its own analysis, internal and external. It’s one of the most studied rivers in the United States. The bigger issue is interpreting the results of those studies. What are the key indicators that are useful for forecasting? What is the effect of climatic changes? What happens when you go through long droughts or long wet periods? How does that effect the different operations? Going back to 1922, I think the early forecasters were overly optimistic about the amount of water in the river. Ever since then, they’ve been trying to catch up with that forecast.

Municipal Water Leader: What is your message to federal and state lawmakers?

Jim Broderick: Legislators tend to pay attention to water experts. My advice is to listen closely, because the river is lifeblood for millions of people, and all state and federal lawmakers must work as one if the Colorado River basin is going to meet all its demands.

When everybody finally brings something to the legislators, it’s probably been well vetted. Few things make it to those levels without all states having input. That is what happened with the last piece of legislation that the Colorado River community put together. It had been so thoroughly vetted by the time it was presented for signature that there were few details that needed to be clarified at that stage. Once all the states signed off on it, the federal government was ready to move the legislation. There’s a coordinated effort between water providers; state water agencies; and those who approve bills, whether at the local, state, or federal levels.

Jim Broderick: My vision is a continued dialogue between the basin states to ensure we meet all needs. I think we would like to see better working arrangements so that every project or program encompasses municipal, industrial, agricultural, power, environmental, and recreational needs from the outset. The other critical piece is infrastructure. Maintaining infrastructure in an operational state is essential. Lastly, I hope there is more dialogue between stakeholders so that we all understand every facet of the issues. I think that the water industry, in a lot of places, has the opportunity to bring a new perspective that will provide more flexibility and a willingness to listen. It’s critical for each basin state to ensure that everybody has an opportunity to be heard and that our efforts are beneficial for the whole Colorado River basin.

Jim Broderick is president of the Colorado River Water Users Association and the executive director of the Southeastern Colorado Water Conservancy District. He can be reached at jwb@secwcd.com. 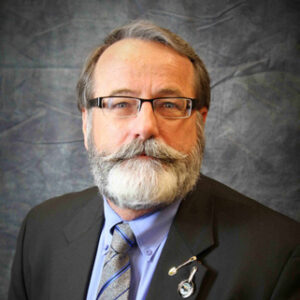