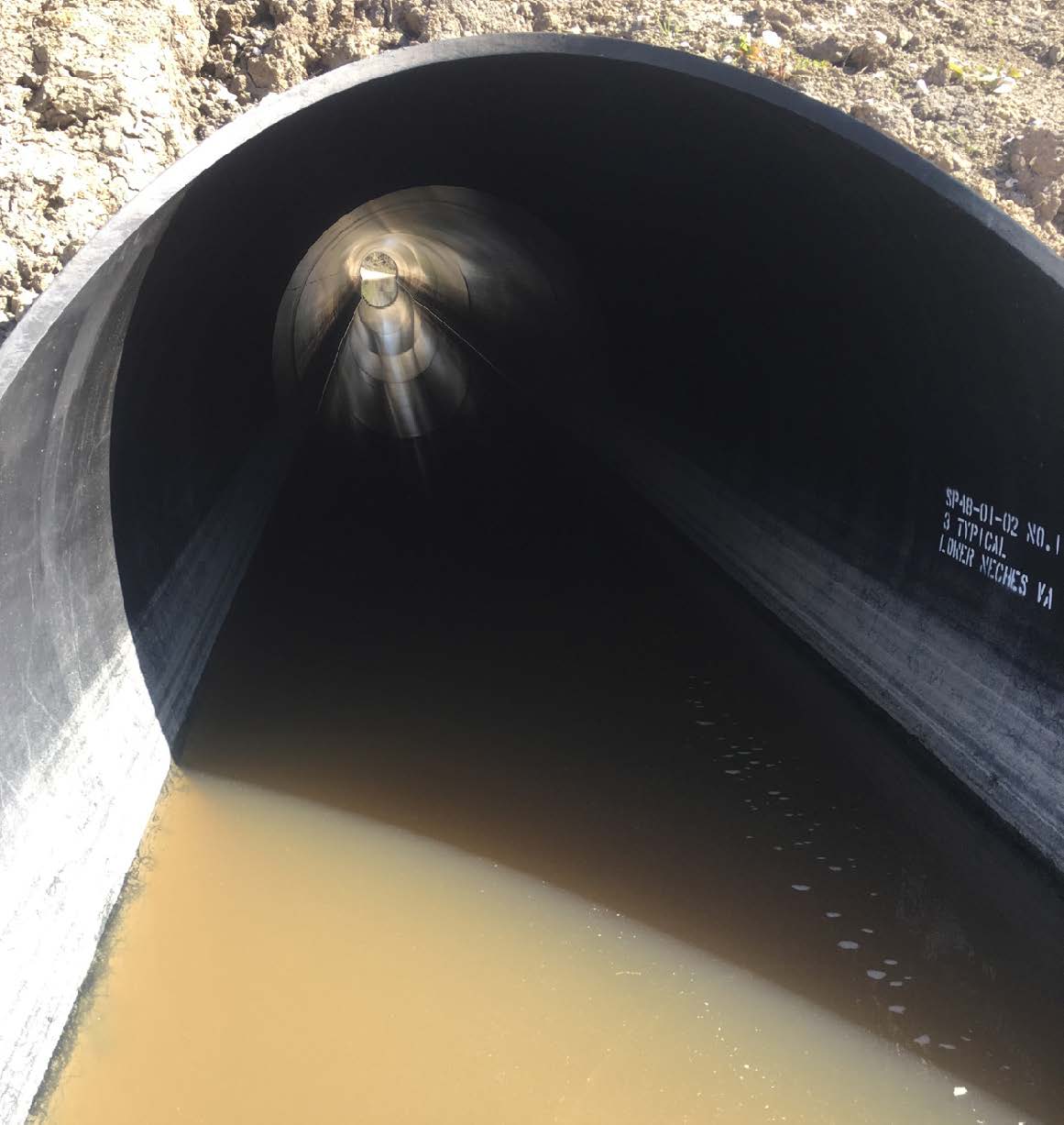 The Lower Neches Valley Authority (LNVA), one of Texas’s 23 river authorities, provides wholesale raw water to industrial, municipal, and agricultural customers in the southeastern corner of Texas. Maintaining a 600‑mile canal system requires the LNVA to periodically replace pipe flumes and culverts in both urban and rural settings. One recent project involved the replacement of a drainage culvert, a freshwater conveyance culvert, and a road that all overlapped in precisely the same spot. In this interview, LNVA Engineering Manager Ryan Ard tells Municipal Water Leader about the Jones Crossing project and the authority’s other current projects.

Ryan Ard: I grew up in Silsbee, Texas, just a few miles north of Beaumont, and attended Kelly High School in Beaumont. I then went on to attend and graduate from Texas A&M in 2011 with a bachelor of science in civil engineering; I later received a master’s in civil engineering from Texas A&M with a focus in water resources. After college, I started working at Jones & Carter, Inc., a private consulting firm in The Woodlands, Texas, mainly handling work with water districts, small cities, and public utilities. In 2016, I had the opportunity to move back to the Beaumont area and work for the LNVA as its engineering manager. I made the move back in February 2016 and have been working with the LNVA now for 4½ years.

Municipal Water Leader: Please tell us about the LNVA’s history and services.

Ryan Ard: The LNVA is one of 23 river authorities in the state, having been authorized by the Texas Legislature in 1933 to develop and manage the waters of the state. The LNVA is the federal partner and local sponsor for the Sam Rayburn and B.A. Steinhagen Reservoirs in the Neches basin. The LNVA holds rights to the use of essentially the entire dependable freshwater yield of Sam Rayburn Reservoir, or approximately 820,000 acre-feet per year. Our jurisdiction includes Hardin, Jefferson, and Tyler Counties as well as portions of Chambers and Liberty Counties. We operate a 600‑mile canal system with primary pumping facilities located on the Neches River and on Pine Island Bayou. Each of those systems operates independently and lifts water approximately 35 feet from the respective tributaries to the top of the hill in the north end of Beaumont. From that point, we convey water through the canal system by gravity, reaching as far south as Port Arthur and as far west as Nome and Winnie, serving our industrial, municipal, and agricultural customers along the way.

Separate from the Neches and Pine Island Bayou systems, the LNVA owns and operates the Devers Canal system, which was acquired in 2008. The Devers Canal system pumps water from the Trinity River, where the LNVA holds 30,000 acre-feet in water rights, and is strictly an agricultural system. It is interconnected with the LNVA system below Interstate 10.

Municipal Water Leader: Is the LNVA a retail or a wholesale provider?

Ryan Ard: We provide raw water wholesale to the municipalities, which then treat it for use as potable water. We also provide raw water to farmers, primarily rice farmers, as well as industrial users, including petrochemical plants and refineries.

Municipal Water Leader: How many customers do you have, and how many people benefit from the supplies that you provide?

Municipal Water Leader: Please tell us about your Jones Crossing project. What was the situation as it existed before you did the project, and what was the problem you needed to solve?

Ryan Ard: Jones Crossing is a location on the east main of the Devers system where a drainage ditch, a canal, and a private farm-access road all converge at the same point, coming from various different angles. All three utilities are basically stacked on top of one another: The road goes over the freshwater canal culverts, which in turn go over the storm water conveyance culverts. The two sets of culverts are perpendicular to one another, and the access road crosses them at an approximately 45‑degree angle. Over the years, the concrete culverts that served to convey the drainage flow under the canal separated and allowed the freshwater canal to persistently leak water into the drainage ditch. To manage the project, we had to take that road out of service and work from the bottom up. We first rebuilt the storm culverts and then placed the canal culverts over them and rebuilt our canal levee system. Finally, we replaced the road surface on top of that. Everything was reconstructed in essentially its original configuration, but with longer-lasting materials and improved slope protection.

Municipal Water Leader: Did the culverts need to be replaced because of age?

Ryan Ard: Both the drainage ditch and the canal culverts were made of concrete, and over time, concrete culverts can lose their effective seal. As the ground settles, moves, or erodes, the joints of the concrete pipe can separate and start to leak water, especially in a configuration where a charged canal sits on top of a typically empty drainage ditch crossing. In the case of Jones Crossing, the canal was always filled with 4–5 feet of water, so water was finding its way through the canal embankment and into separations in the drainage ditch pipe below. Although it was normally a small amount of water, that constant flow into the drainage ditch pipe was a nuisance.

In late 2015 and early 2016, we had a few heavy rains that caused serious erosion near the ends of the drainage crossing. The drainage end treatments had originally been constructed with vertically driven timber headwalls, which had rotted and deteriorated over time. The heavy rains caused a lot of soil to wash out from around those headwalls, basically causing the slopes to fail and slough into the drainage ditch. I should add that the drainage ditch was not under our jurisdiction—it belonged to a rural drainage district. The situation got to the point of threatening the integrity of our canal system, so we had to step in and take care of the problem with the drainage ditch to protect our assets and the canal.

Municipal Water Leader: How old was the infrastructure that you were replacing?

Ryan Ard: I don’t know when it was constructed, but it was made of unreinforced concrete, which is evidence that it was an older installation. Reinforced concrete pipe is the standard today.

Ryan Ard: You’d be surprised. In some locations, the LNVA still uses timber to construct headwalls or retaining walls. It’s good for holding back small slopes. Timber isn’t necessarily a sign of old infrastructure; however, its condition in this particular location indicated that it was likely several decades old.

Municipal Water Leader: What was the timeline of the Jones Crossing project?

Ryan Ard: We started planning it in September or October 2016 and completed it in March 2017. The agricultural offseason runs from November to March, so we had a strict timeline. We started to get some of those heavy rains that exacerbated the problem at the end of 2016. Typically, we like to design those projects prior to the end of the ag season

so that construction can begin immediately after the season ends. The heavy rains caused severe erosion problems that needed immediate attention, so the project was planned and designed quickly. We have work crews that typically handle maintenance activities on the canal system, so we had some construction equipment and employees with the ability to do the type of work that was necessary to build this crossing.

Municipal Water Leader: How did you choose the pipe material to use in this project?

Ryan Ard: We looked at reinforced concrete pipe, steel pipe, corrugated aluminum pipe, and fiberglass pipe. Reinforced concrete pipe comes in short joints and is generally heavy and not watertight. It works great for storm water, but when you have a canal that is charged 24/7, it has the potential for leakage and failure. We needed something more watertight. Steel pipe was another option, but its disadvantage is corrosion. You can coat steel pipe, but that generally means that you will need to engage in long-term maintenance to keep your coatings up to date. Since this is a drain ditch that conveys debris-filled water, we felt that the maintenance that would be required would be excessive. Corrugated aluminum pipe is a light-duty pipe. We looked at it because the drain ditch is not technically under our jurisdiction and is in a rural area that does not necessarily have the funding to replace a culvert crossing like this. However, because the existing structure posed a risk to our canal system, we decided to replace it at our own cost, and we figured that if we were spending the money, we wanted something that would last longer. We see some soil conductivity interactions with corrugated aluminum pipe in this area, so it doesn’t tend to last long.

What we were left with was fiberglass pipe, which we have used at several other locations on our canal system, primarily for some large-scale crossings and larger-diameter pipe replacements. The benefits of fiberglass include that it comes in 20‑foot joints, it’s got a watertight seal, and it doesn’t suffer from corrosion. Structurally, it was rated to take the kind of load we were going to put on it. Also, rather than having to cut the piping in the field, we can factory-order fiberglass pipe cut precisely to our specifications. It has clean joints and also offers ultraviolet light (UV) protection. Their exterior of the pipe is UV rated, but the interior of the pipe is not. In the case of this drainage ditch, the ends of which will be potentially exposed to UV for an extended period of time, we opted to apply an optional UV coating as well.

Municipal Water Leader: What are the LNVA’s top issues today?

In terms of the pumping facilities, we recently completed two pump replacements and major improvements to the discharge piping systems on our Neches facilities. We are currently pursuing options to fortify our pumping plants against potential floods and to expand our engine fuel systems to provide better redundancy in case of emergencies.

With regard to conveyance structures, the LNVA recently finished a large initiative to replace many of the aging flume structures on both the LNVA and Devers Canal systems. In total, we have completed 10 flume replacement and/or improvement projects over the last 5 years. One of our current primary focuses is on enlarging crossings on the industrial leg of our canal system to better serve our industrial customers. We have a $7 million project underway that includes the replacement of nine street crossings, seven with bridge structures and two with traditional culverts. We are in the design stage of a similar project, estimated at around $6 million, that will replace another five street crossings with similar structures. In both of the culvert replacement projects, we will be looking at using fiberglass pipe for at least one of the crossings where bridges are not feasible.

Ryan Ard, PE, is the engineering manager of the Lower Neches Valley Authority. To contact Mr. Ard and to learn more about The LNVA, visit www.lnva.dst.tx.us.