The Chicagoland-area DuPage County Stormwater Management Department has an unusual flood-control tool in its arsenal: a converted quarry. The Elmhurst Quarry flood control facility was completed in 1996 and has a total capacity of 2.7 billion gallons. In this interview, Director Sarah Hunn and Deputy Director Chris Vonnahme speak with Municipal Water Leader about how the facility works and about the challenges of controlling storm water.

Municipal Water Leader: Please tell our readers about your backgrounds and how you came to be in your current positions.

Sarah Hunn: I graduated from Michigan Technological University with a civil engineering degree. Upon graduation, I started working for the Illinois Department of Transportation in the water resources group. I then moved on to the DuPage County Stormwater Management Department, where I started as a senior civil engineer and worked my way up to my current position as director.

Chris Vonnahme: I am the deputy director of the department. I earned a degree in agricultural engineering from the University of Illinois Urbana-Champaign. As part of that program, I specialized in soil and water. After graduation, I was hired as a civil engineer with the DuPage County Stormwater Management Department. I have worked with the county for over 31 years and am currently the deputy director for the department.

Municipal Water Leader: Would you tell us about the department’s history and mission?

Chris Vonnahme: Our department was formed following a major flood event in August 1987. The State of Illinois passed legislation shortly after that event to allow the five collar counties surrounding Chicago to start their own storm water management programs. Our storm water management committee was tasked with addressing the severe flooding, specifically in the more urbanized Salt Creek watershed. We developed an ordinance that set minimum countywide standards for storm water management to ensure that new development would not adversely affect floodplains, floodways, or wetlands within the county. Our engineers and wetland specialists also began developing watershed plans to address the severe flooding and water quality impairments within the county.

Sarah Hunn: We have 17 flood control and flood storage facilities. Most of those are offline, or adjacent to the riverine systems. We do have one major facility that is online, meaning that it actually uses the riverine system as part of the flood storage. In total, we can divert around 6 billion gallons of water during a major flood event.

Municipal Water Leader: Is your area particularly vulnerable to floods?

Sarah Hunn: Yes, we are particularly vulnerable to flooding in our area. The main reason is that we’re in a very flat area where there is not a lot of storage potential in the rivers and streams. We have broad floodplains rather than fast-moving floodplains.

Chris Vonnahme: Our county is also heavily developed. There are many storm sewer systems that drain storm water quickly into our stream systems. Since our streams are flat, water doesn’t flow downstream fast enough, resulting in water rising over the stream banks and causing overland flooding.

Municipal Water Leader: Would you tell us about the Elmhurst Quarry flood control facility?

Chris Vonnahme: Our engineers developed the Lower Salt Creek Watershed Plan, which identified capital improvement projects to reduce the severe flooding on Salt Creek. We realized that conveyance improvements weren’t going to solve the flooding. We had to incorporate many large storage projects to help reduce the flooding in the area. Elmhurst Quarry was the cornerstone of that plan. Today, it provides 8,300‑acre-feet of storage for the watershed.

Municipal Water Leader: What were some of the benefits and challenges of converting an existing quarry into a floodwater storage facility?

Chris Vonnahme: One of the big benefits of using the quarry was that the storage space had already been created by over 100 years of blasting at the site. It was an expensive project to convert the quarry into a flood control facility. However, when you break down the cost per acre-foot of storage provided, it’s actually the cheapest flood control facility in DuPage County.

One of the major design challenges involved the physical location of the quarry in relation to Salt Creek. Route 83, a major roadway in the Chicagoland area, is located between Salt Creek and the quarry. Getting the water from Salt Creek into the quarry without disrupting the traffic on Route 83 was a challenge. That was accomplished through a vortex drop shaft and tunnel system. Another challenge was getting the water back to Salt Creek after water elevations in the stream subsided. We achieved that through multiple pumping stations.

Sarah Hunn: We also needed to make sure that the quarry itself wasn’t going to be susceptible to floods and that there wouldn’t be too much infiltration into the existing underground mine beneath the quarry, which we did not need for flood control. We ensured that all the big concrete plugs in the entrances of the mine were safe and structurally sound and would keep the floodwater in the surface quarry, preventing it from leaking into the mine.

Chris Vonnahme: Another design challenge was that before the quarry was purchased by the county, its west lobe was being used as a construction debris landfill. The landfill had to be capped and the side slopes stabilized to ensure that the landfill’s contents would not leach out into the surrounding soils and into local groundwater. We obtained a permit from the U.S. Environmental Protection Agency (EPA) to perform this work. The facility was completed in 1996.

Municipal Water Leader: How does the facility operate during a storm event?

Sarah Hunn: We have a SCADA system that oversees everything within our storm water network. We watch the upstream and downstream elevations in the stream. About a mile downstream of the quarry, we have a stream gauge that tells us when we’re going to start seeing flooding. When it hits what we call a trigger elevation, we initiate the operation of the quarry. First, we open a 7‑foot-by-7‑foot gate, which can handle some of the lower-flow events. The water enters over a fixed weir, goes through a couple of tunnels underneath Route 83, and then drops into the quarry. We are actually adding a second gate to allow more water to come in at lower events, so we’ll have two entrance points instead of one. Our total operating intake capacity is 2.7 billion gallons.

Municipal Water Leader: After the storm or flood event is over, what do you do with the water?

Sarah Hunn: We allow Salt Creek to recede to a safe level and then pump the water back into the creek. If the water has sat in the quarry for weeks or even months, we find that it has sometimes lost dissolved oxygen, so we have an aeration facility that puts oxygen back into the water before it is returned to Salt Creek. We also test the water as it is going back into Salt Creek to make sure that there are no toxins or anything outside EPA parameters.

Chris Vonnahme: We believe the quarry also provides a water quality benefit for the watershed. When storm water flows into the quarry, it contains sediment and other suspended solids. While the storm water is stored in the quarry, a lot of that sediment and organic matter settles out. Because of that, we feel that the water is cleaner when we pump it back into Salt Creek.

Municipal Water Leader: How much water does a standard storm event deposit in that facility?

Sarah Hunn: We have only filled the quarry once, during a storm event in 2008. In general, the quarry goes into operation four to five times a year. Our typical operation has us taking in less than 1 million gallons. In more frequent, less severe rain events, the elevation of Salt Creek does not get high enough to overtop the fixed weir. In these situations, our 7×7 gate allows us to control the levels in Salt Creek. In these more frequent events, the approximate intake into the quarry is likely closer to 1 million gallons. We are adding a second 7×7 gate to help us further reduce flood elevations in Salt Creek during those frequent events. With the addition of a second gate and the effects of climate change, we will likely see our annual diversion amounts increasing twofold or more.

Municipal Water Leader: In the past, the county has considered creating a pumped storage hydropower facility in the mine that exists under the quarry. How would that work?

Sarah Hunn: It’s been considered quite a few times. Every few years, depending on developments in the Federal Energy Regulatory Commission’s regulations or other federal regulations associated with clean energy, someone reaches out to us about it. Each time we evaluate the idea, the big issue is that if the quarry were used for hydropower, we would need to team up with Commonwealth Edison or another major energy company, and the energy company would actually want the land rights of the facility so that it would own the hydropower. DuPage County is prohibited from allowing a lease longer than 20 years. Twenty years is not long enough for most energy companies to earn a return on their investment.

As I mentioned earlier, there is a huge underground mine underneath the quarry. The idea for a pumped storage facility is that during the daytime, when power demand and energy costs are higher, we would drop water through a turbine down into the quarry and generate power. At night, we would pump the water back up to the quarry so that it could be reused. If we needed to use the quarry as a flood control facility, we would be able to drop all the water down into the mine so that we would have the full capacity of the quarry for flood storage.

Sarah Hunn: Yes. The difference in damages between the 1987 flood event and the similar event in 2008 was probably about $500 million, so we can definitely say that we’ve seen a significant reduction in flood damage because of the quarry.

Municipal Water Leader: What advice would you have for another agency or municipality that was considering transforming an old quarry or another similar structure into a flood control facility?

Sarah Hunn: Do it! We’ve been fortunate to have this facility, especially in the more urbanized eastern side of the county. You can’t skimp on maintenance, though. You have to be out there inspecting and checking your pumps. Quarries do a lot of blasting, which loosens the rock structure. You need to make sure that there’s no room for slag in that and that it stays safe. Additionally, the side walls are completely vertical, so extra care and inspection may be needed to ensure that the surface structure does not collapse. Another item to be concerned about is trespassing. We have a 24‑hour patrol to make sure there is no trespassing, as the inside of the quarry can be extremely dangerous

Municipal Water Leader: Is there anything you would like to add?

Sarah Hunn: We show the quarry facility to the public and do tours. The public can also see all the information about our flood control facility operations online in real time. They can see when we open the quarry, when we’re bringing water in, and so on. It has been a great educational tool for us. We want everybody the community to know what’s going on so that everybody can have pride in the facility.

Sarah Hunn is the director of the DuPage County Stormwater Management Department. She can be contacted at sarah.hunn@dupageco.org. 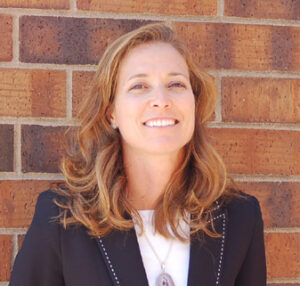 Chris Vonnahme is the deputy director of the DuPage County Stormwater Management Department. He can be contacted at christopher.vonnahme@dupageco.org.