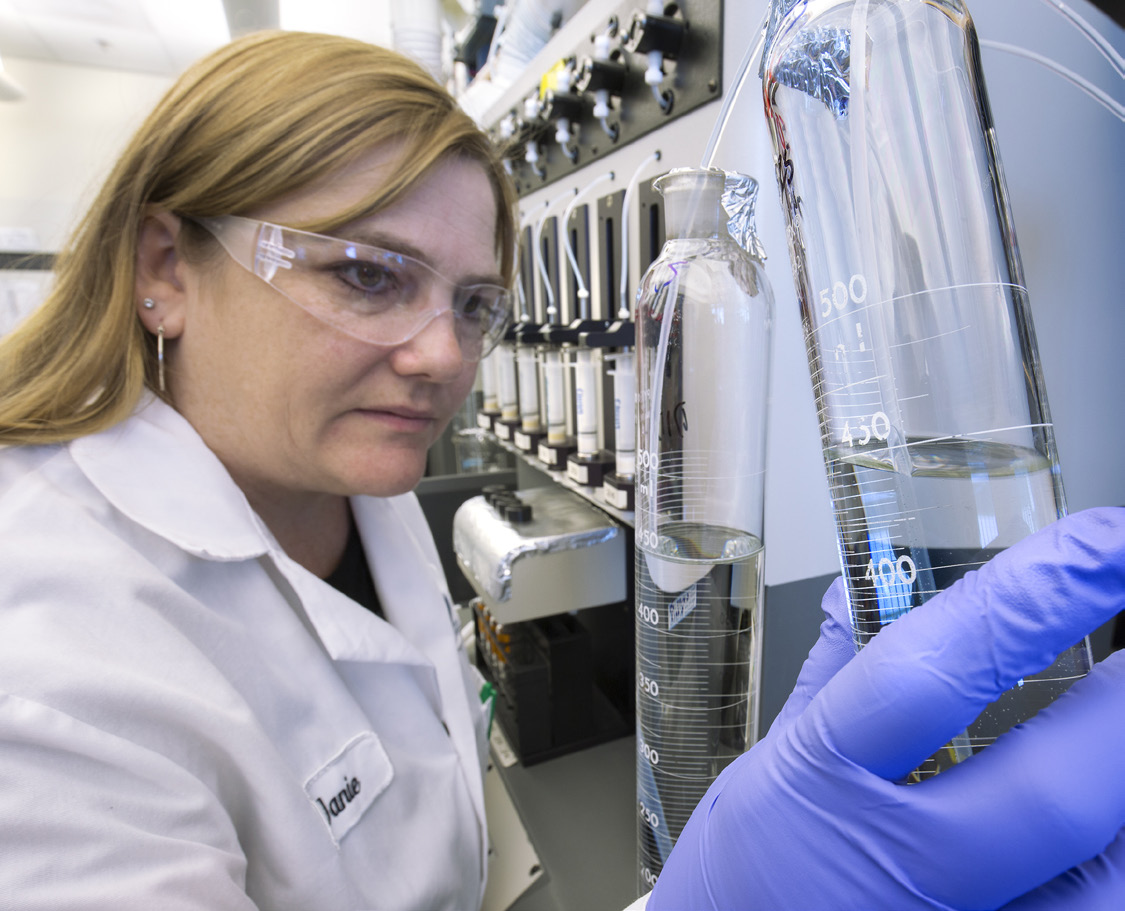 The Southern Nevada Water Authority (SNWA), which provides wholesale water to more than 2 million people in southern Nevada, is highly proactive when it comes to water purity and safety. Beginning around 2000, it has done significant research into detecting and removing pharmaceutical contaminants and other contaminants of emerging concern from the water supplies it delivers. David Rexing, the SNWA’s water quality research and development manager, has worked for Las Vegas’s not-for-profit water agencies since 1975. In this interview, he tells Municipal Water Leader about the development of the agency’s compliance laboratory and its research activities today.

David Rexing: In my undergraduate studies, I majored in chemistry, but I was not sure what particular facet of chemistry I was interested in. Luckily, a professor came to me during my senior year and asked if I would like to do an internship at the local water treatment plant. He explained that a water treatment plant dealt with microbiology, hydraulics, and other scientific applications. I went to work at the local waterworks half time during my senior year, working 4 hours a day and taking classes 4 hours a day. I split the weekends with another intern. That was the springboard for me. I became so interested in the field that I pursued graduate studies in hydrology and water resources, and after graduating, I was hired into my current position.

Municipal Water Leader: Please tell us about your positions at the SNWA and the Las Vegas Valley Water District (LVVWD).

David Rexing: When I started in 1975, the Safe Drinking Water Act (SDWA) had just passed, and the SNWA had not yet been formed. At that time, I was employed by the LVVWD, which wanted to start a big compliance laboratory to take care of all the monitoring activities it required. I started from nothing and built a laboratory by myself. When the district and other local water and wastewater agencies formed the SNWA in 1991, the water quality compliance functions became part of the SNWA’s responsibilities. Today, approximately 40 individuals work in the SNWA lab, taking care of all the monitoring and analytical requirements of the SDWA. In 2000, the director of our plant decided that we needed to get a little more specialized in our research. I had always done some research in the compliance lab, but it took second place to compliance. I left the compliance group and started up yet another division, the Water Quality Research and Development Division, which today has about 25 individuals on staff. We solicit external funding and receive between half a million and a million dollars a year to do water quality research work. In addition to the work we do for external agencies who are trying to advance the field, we try to solve water quality problems within our own water treatment plant and distribution system. We are trying to optimize our internal process and stay ahead of the curve in terms of water quality.

Municipal Water Leader: Please tell us about the SNWA and its services.

David Rexing: The SNWA is a regional wholesale water provider that manages our community’s water resources on a regional basis. We are responsible for the management of southern Nevada’s water supply, the treatment and delivery of wholesale water, the coordination of conservation programs, and water quality compliance. The LVVWD serves as the managing agent for the SNWA. We remain committed to protecting water quality and expanding our knowledge and understanding of emerging water quality issues to remain ahead of the curve. From a water conservation standpoint, we have some of the most progressive and comprehensive programs in the nation. It’s these types of commitments that help us remain highly efficient and on the leading edge of the water industry.

Municipal Water Leader: When did the issue of pharmaceutical contamination in drinking water first come to the SNWA's attention?

David Rexing: Around 2000, environmental research in the field, particularly by a researcher named Shane Snyder, found that pharmaceuticals were affecting the life of fish in streams, particularly things like hormones from birth control pills. We became interested in that, because even though we’re not in the ecological business, we treat our local wastewater to a tertiary level. That water flows by way of the Las Vegas Wash back into Lake Mead, which is the source of our drinking water supply. We became interested in whether those pharmaceuticals were affecting our drinking water supply. We became involved in research, received funding from several different agencies, and developed in-house analytical protocols to analyze water for very low levels of those pharmaceuticals. We did some of the original research work that found ozone to be one of the most effective methods of removing these compounds from water. We currently use ozone in our two treatment plants. Since 2000, we have continued monitoring for a suite of pharmaceuticals in the Las Vegas Wash; Lake Mead; and, ultimately, in our finished drinking water product.

Municipal Water Leader: Are there any other treatments that your district uses to eliminate pharmaceutical contamination in addition to ozone?

David Rexing: No; that’s really the only technology we’re using.

Municipal Water Leader: Before you came to the conclusion that ozone was the most effective treatment, did you experiment with other treatments?

David Rexing: Yes; we tried half a dozen treatments. We looked at granular activated carbon; disinfectants like chlorine dioxide, permanganate, and hydrogen peroxide; and membrane techniques. We did a research report evaluating and ranking 20 different technologies that could potentially be used to remove pharmaceutical compounds from water. Ozone was one of the ones that did the best job.

Municipal Water Leader: Did you do that research in partnership with any other organizations or universities, or was it done mainly by your in-house staff?

David Rexing: It was a collaborative effort with half a dozen universities. All our research has always been collaborative. The real key to strong research is to get a lot of partners involved, because no one partner has all the expertise. You can do a lot more together than you can separately. When we received the extra funding for research on pharmaceuticals, some of the money we received went out to subcontractors, such as universities and other laboratories, which carried out certain parts of the research.

Municipal Water Leader: How does the district identify the suite of pharmaceuticals to test for?

David Rexing: You can’t analyze for thousands and thousands of different compounds, so we selected representative compounds from categories like hormones, pesticides, seizure medications, heart medications, and so forth. Then we researched which of these pharmaceuticals were being produced at the greatest poundage per year. The greater the poundage, the higher the probability that the compounds were going to find their way into the environment. Based on this information, we identified a suite of 20–25 pharmaceuticals that we analyze for routinely.

Municipal Water Leader: What are some of the most common pharmaceuticals in drinking water today, and what dangers can they pose?

David Rexing: Actually, there aren’t really many compounds in treated drinking water, although you can probably find these compounds in the raw water supply before it is treated. Common pharmaceuticals that are found in raw and untreated water include things like birth control medications, hypertension medications, and heart medications.

Municipal Water Leader: In the drinking water that is delivered to customers’ houses, have those pharmaceutical compounds been eliminated or reduced to such a level that they don’t pose any danger?

David Rexing: Well, that certainly is true for our treatment facilities and water. I can’t speak for the entire country, because there aren’t any current regulations on this matter. There is still a lot of ongoing research about the levels at which these pharmaceutical compounds would be dangerous; that’s still uncharted territory. That being the case, I think the responsible thing to do is just to reduce those compounds to concentrations below the detection level under all circumstances.

David Rexing: No, it is not. Ozone is a powerful disinfectant and oxidizer that has been used in the pharmaceutical industry and other industries for a long time, but it’s not heavily used in the drinking water industry. Most water treatment plants in the United States use chlorine as their primary disinfectant. Generally, chlorine can be trucked in or can be generated on site through a much simpler process than can ozone. Ozone is more expensive and is generally harder to generate on site. Our experience, however, has been that ozone is not only a highly efficient disinfectant for things like cryptosporidium and giardia, it’s also good at removing things like pharmaceuticals and eliminating tastes, odors, and color from water. Considering all those capabilities, we believe that ozone is viable and cost effective despite the fact that it is more expensive than common disinfectants like chlorine.

Municipal Water Leader: How has the science of detection and treatment changed in recent decades?

Municipal Water Leader: What advice do you have for other water districts or water suppliers that do not have existing detection and treatment programs for pharmaceutical contamination?

David Rexing: My advice to them is to have their water tested by a consulting laboratory or university. If you find high concentrations of these things, attempt to do something to remove them. Ozone is not the only method. As I mentioned earlier, granular activated carbon is another treatment method. A lot of utilities used granular activated carbon for taste and odor control long before the issue of pharmaceutical contamination came to light, so a lot of treatment plants have those capabilities and could use them to remove pharmaceuticals. The other thing I would advise small utilities to do is to partner with an organization like the Water Research Foundation (WRF). The WRF collects membership dues from medium- to large-sized utilities and does research that can be valuable to all utilities. A small utility without funding can still take advantage of that research and implement the technologies that the WRF recommends.

Municipal Water Leader: What else is the SNWA working on?

David Rexing: Over the last few years, the U.S. Environmental Protection Agency (EPA) has gotten concerned about algal toxins—toxins that certain algae produce through their metabolic life processes. In fact, the EPA now has regulatory limits on a couple algal toxins. We are doing some research on that group of compounds and are developing techniques to detect them in low concentrations and remove them from water. We are doing a lot of the same things today in the algal toxins area that we were doing in the pharmaceutical research area 20 years ago. Perfluorinated alkylated substances, known as PFAS, are also a big concern today. PFAS compounds, which are used to manufacture things like Teflon, are finding their way into water supplies, lakes, and rivers. They are inert and not easy to destroy, but we’re doing research into detecting and removing them.

Municipal Water Leader: What is your vision for the future of the SNWA’s water treatment and science programs?

David Rexing: The compliance laboratory now has about 40 individuals, and its research and development group has about 25 individuals. I see the groups continuing to do what they’re doing in a progressive and proactive way; continuing to solicit external funding; and maintaining the SNWA’s leadership role in the water, wastewater, and environmental fields.

David Rexing is the water quality research and development manager at the Southern Nevada Water Authority. He can be contacted at david.rexing@lvvwd.com.

Black & Veatch: Management for All Stages of the Asset Life Cycle