On October 29, 2012, Hurricane Sandy hit New York City. It was the most serious hurricane to hit New York in many years, flooding large parts of the city, damaging buildings and roads, and knocking out power. The hurricane posed significant challenges to New York’s Department of Environmental Protection (DEP), particularly to its wastewater treatment infrastructure. Many of its wastewater resource recovery facilities and pump stations lost power or were damaged by the storm surge.

Joshua Dill: Please tell us about DEP and its services.

Tara Deighan: DEP’s primary objective is to provide 9.6 million New Yorkers with clean drinking water. We also treat 1.3 billion gallons of wastewater every day. In addition to that, we try to mitigate hazardous air and noise pollution.

Joshua Dill: Would you give us an overview of DEP’s wastewater infrastructure?

Tara Deighan: We have 14 wastewater resource recovery facilities and 96 pump stations across the 5 boroughs. We treat 1.3 billion gallons of wastewater on a dry day and can handle double that capacity during a wet weather event. We have about 7,500 miles of sewers that deliver that wastewater to our plants.

Rather than simply treating that wastewater and dumping it into the harbor, we are trying to recover resources from it. There are actually various usable resources that result from the treatment process, including biosolids, methane gas, and of course clean water, which is treated to be biologically similar to the water body it is going out into. We are seeing this trend on the national level as well: not just treating wastewater, but recovering resources from it.

Joshua Dill: Would you tell us about your experience during Hurricane Sandy and its effects on the wastewater system?

Colin Johnson: Ten of our 14 treatment plants and 42 of our 96 pump stations were adversely affected in some way by the storm, whether they were flooded, suffered power outages, or something else.

Alan Cohn: We fared relatively well compared to some neighboring municipalities. Bay Park Sewage Treatment Plant on Long Island and Passaic Valley in New Jersey were down for several weeks. Our longest outage was the Rockaway plant on the Rockaway Peninsula, which was down for 3 days. That is the smallest of our 14 treatment plants, so we fared relatively well. Those outages resulted in raw or partially treated sewage being discharged into the harbor from those treatment plants. Millions of gallons of untreated and diluted sewage was mixed with the storm water that spilled into waterways across the city via our outfalls throughout the harbor. 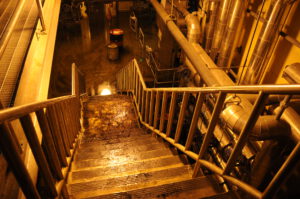 Tara Deighan: Luckily, because we avoided catastrophic failures, we were able to put all our plants back online quickly and avoided more of that occurring. I believe the estimated damage to DEP’s infrastructure was $100 million. We had staffers working around the clock, not just in our treatment plants, but going around the city investigating flooding conditions, pumping out basements, and helping to clear downed power lines and trees. It was an all-hands-on-deck effort. For a little perspective, of our 6,000 employees, roughly 1,100 live in a flood zone. Many people still made it to work and jumped into action.

Joshua Dill: Why was untreated sewage discharged into the water? Was it because the sewer capacity was overwhelmed?

Alan Cohn: That was part of it. Another reason was the loss of power.

Colin Johnson: The unprecedented nature of the storm was the main cause of it. The loss of power, flooding, and hurricane conditions that our facilities faced overwhelmed a lot of them.

Joshua Dill: What did DEP learn from this experience, and what things will it incorporate into its plans for future storms?

Colin Johnson: The main thing we learned was how vulnerable the facilities are. Out of necessity, they’re located in low-lying areas near the coastline. This is probably the first major hurricane to hit New York City in 50–60 years, so a lot of these facilities were built, quite frankly, without a hurricane being taken into consideration. It was an expensive wake-up call—$100 million is nothing to ignore. We will be implementing measures to better protect these facilities in future events.

Alan Cohn: We were also made aware of our vulnerability to climate change. When Sandy hit, we were already doing a study of one of our treatment plants’ sensitivity to sea level rise, increasing rainfall, and storm surge. We were able to quickly mobilize what we learned from that study and apply it to all 14 treatment plants and about 60 percent of our pumping stations, which we found to be at risk of future flooding from storm surge and sea level rise. One of the lessons we learned from Sandy was that these effects are potentially more immediate than we thought. We wanted to make sure that we focused not just on how to repair our damaged facilities but on what we need to do to harden our facilities against future events.

Joshua Dill: After the initial experience in response to the storm, what kind of recovery and resiliency efforts did the department undertake?

Alan Cohn: Our main action was developing a wastewater resiliency plan, essentially a flooding audit. First, we did an initial screening. We looked at the future floodplains depicted on the new interim flood maps released right after Hurricane Sandy. This was the first time they had been revised since 1983. That screening analysis helped us see what was potentially at risk in the future. Then we deployed people to each of the facilities and looked at everything that was below flooding elevation. We also looked at flooding pathways. Water can get in through grates or tunnels and in all sorts of other ways. Even if an asset isn’t at risk from direct inundation, there might be other ways for water to get to it. Most of the projects that were already in progress or being designed prior to Sandy were reevaluated and redesigned to implement resiliency features.

Colin Johnson: The agency also implemented guidelines mandating that all new construction must take into account design flood elevations and the vulnerability of equipment to flooding.

Joshua Dill: Were there other major infrastructure projects that you did in response to the hurricane?

Alan Cohn: We coordinate with other coastal protection efforts in making sure that our infrastructure is integrated with those larger projects, but most of the agency’s projects are focused on what we can do to individual assets.

Tara Deighan: We are looking at how we can be more proactive in the face of climate change, which will have effects that go beyond just the storm surge. In the face of this, and expecting that other storms may bring heavy rains or cloudbursts, we’re separating sewers and building tanks and a ton of green infrastructure all over the place, including rain gardens, permeable paving, and green roofs.

Joshua Dill: It sounds like your expectations for how frequently a storm of this magnitude can happen has changed.

Alan Cohn: Yes, we acknowledge that with sea level rise, even a smaller storm could cause as much or more damage. About a foot of the surge from Sandy was attributable to the sea level rise that has occurred since 1900.

Colin Johnson: Before, no one really thought such a serious hurricane would ever hit New York City because it hadn’t happened for so many years, but we expect it to happen again and we need to plan for it.

Alan Cohn: The storm might take a different form. We’re seeing a lot of heavy rain events and other storms that, while not of the same magnitude, need to be planned for.

Tara Deighan: I think New York City has lost about 85 percent of its wetlands since we started developing the city. We do have a program to restore them. We have realized that our wetlands and natural coastal areas are our first line of defense. We describe our wetlands as natural sponges. They absorb some of the energy of the storm surge, help filter water in a natural way, and provide a habitat for wildlife. We just completed a fabulous wetland restoration project by LaGuardia Airport in Flushing Bay. It’s growing really nicely, and New York Harbor is cleaner than it has been since the Civil War. We’re seeing that even in polluted water bodies, those wetlands are not just surviving but thriving.

Joshua Dill: To wrap up, would you tell us about your vision for the future?

Colin Johnson: Our vision, which we’re implementing right now, is being prepared and expecting another hurricane to happen. We want not only to know what to do but to have plans in place to protect the assets necessary to maintain the high level of treatment that we routinely provide, even during extreme weather events.

Tara Deighan: The services our agency provides are so critical to the survival of the city that we need to plan 50–100 years into the future.

Alan Cohn: Our main immediate focus is on implementing the recommendations of the wastewater resiliency plan and to implement integrated flood protection, including green infrastructure. We also need to continue to work with other city partners on holistic flood management, not just management on the asset level.