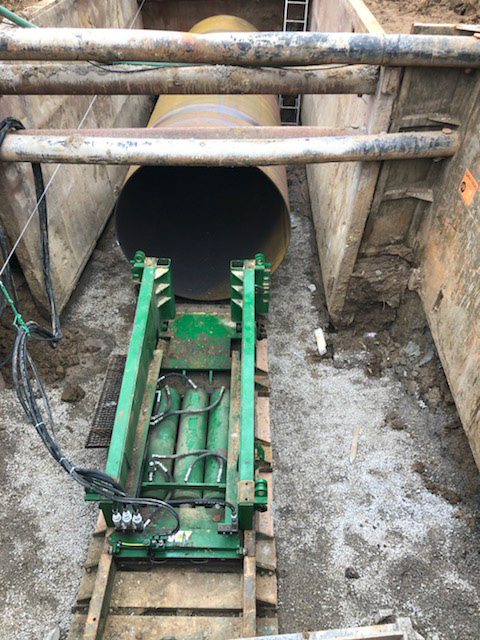 The City of Broken Arrow, Oklahoma, is a suburb of Tulsa with a population of about 115,000. Ethan Edwards, PE, is the city’s director of engineering and construction, and Timothy Robins, PE, is its construction division manager. The two civil engineers work together to carry out the city’s many capital and infrastructure projects. One major current project is the replacement of an aging and deteriorating sewer trunk line with large-diameter PVC pipe. In this interview, Mr. Edwards and Mr. Robins tell Municipal Water Leader about the challenges of installing a major new pipeline in challenging geological terrain.

Municipal Water Leader: Please tell us about your backgrounds and how you came to be in your current positions.

Ethan Edwards: I’m a civil engineer by trade and have 20 years of experience in this field. I graduated from Oklahoma State University in 1999 and spent the bulk of my career in the consulting segment of the municipal water industry. The City of Broken Arrow was one of my clients, and I did a variety of projects for it over the course of about a dozen years. About a year ago, this position became open, and because I was familiar with the city, I jumped at the opportunity. I was fortunate enough to be selected for the role. It’s been an easy transition for me because I already knew a lot of the staff here, and while I’m a civil engineer and am responsible for a wide range of topics, my expertise lies in the water and wastewater areas.

Timothy Robins: My background is also in civil engineering. I got my bachelor’s at Missouri University of Science and Technology and recently obtained a master’s degree in engineering management from the University of Arkansas. My career is primarily based around construction and field services. My university studies focused on structural engineering, so I was a structural engineer designer for a while. I transitioned into field services while working with a company based in Missouri, where I did material testing and construction oversight for several years. That job involved running a team that covered the states of Arkansas, Missouri, Oklahoma, and Texas. About 5 years ago, I transitioned to Oklahoma and took the opportunity to serve as Broken Arrow’s construction manager, and I love it. Our division handles all public construction contracts and oversees and inspects all the privately funded public infrastructure that gets donated by subdivisions and business development sectors throughout the city.

Municipal Water Leader: Please tell us about the City of Broken Arrow’s water, wastewater, and sewer services and infrastructure.

Ethan Edwards: The City of Broken Arrow covers over 60 square miles and has a population approaching 115,000 residents, which equates to 35,000– 38,000 customers or taps. On the water side, the city is served by one advanced water treatment plant, the Verdigris River Water Treatment Plant, which uses membrane technology. Our raw water comes from the Verdigris River. We have two wastewater treatment facilities. One, the Lynn Lane Wastewater Treatment Plant, is owned by the City of Broken Arrow. The other, the Haikey Creek Wastewater Treatment Plant, is operated by the Regional Metropolitan Utility Authority, which encompasses several cities in the Tulsa metropolitan area, including Broken Arrow. In fact, Broken Arrow and Tulsa are the primary contributors of flow to that second facility.

Timothy Robins: The Verdigris River Water Treatment Plant has the capacity to process around 27 million gallons of water per day (MGD), with a daily average of 14–16 MGD. That water is distributed through the city via an elevated storage tank distribution system. That’s how we get our pressure. We have high- and low-pressure water pipe, and we supplement our higher end with four booster pumps. Our water supply system has several connections with that of the City of Tulsa, which we can use to supplement our supply during high usage, usually during July, August, and September. One of the largest of these is the 61st and Olive Street connection, which feeds our lower-water-pressure points. Another at 51st and Aspen feeds into our higher-pressure Battle Creek tank. Throughout town, we have 891 linear miles of water lines, ranging from 2 to 48 inches in diameter.

Regarding our wastewater system, as Ethan said, there are two main wastewater reclamation plants. The outflow of the Lynn Lane plant is 4–6 MGD. The main feeds that go to that plant come out of our Indian Springs lift station and from the county line trunk sewer, both of which collect influent from several other trunk lines. The Haikey Creek plant has a joint feed from Tulsa and Broken Arrow, with the latter accounting for as much as 60 percent of flow. That plant processes 10–14 MGD. Several lift stations feed into that system: one on the south side of Tulsa; another in the northwest; and, most importantly, the Haikey Creek lift station at 121st and Garnett Streets. That one has three large force mains, each of which is 30 inches in diameter.

Municipal Water Leader: Please tell us about your new pipeline project. What led to the need for a new sanitary sewer line, and how it was planned?

Timothy Robins: The project was launched to respond to the worsening deterioration of the existing pipeline system. It is a more-than-30‑year-old concrete line of variable diameter that averages around 27 inches. Several sections of the pipeline have deteriorated to the point at which the crown section of the pipe has almost completely disintegrated. This has led to the development of numerous sinkholes during high-flow periods: When the pipes run full, the remaining crown material and the soil above become saturated, ultimately leading the crown and the soil to collapse into the sewer line. While these issues have plagued the line for a good part of its history, their frequency has been increasing recently, leading us to recognize that a replacement was in the community’s best interest. In addition, a wastewater master plan completed for the City of Broken Arrow by HDR recommended several projects, not only from an operations and maintenance point of view, but also from a capacity point of view. Besides the concerns linked to deterioration, the replacement of this pipeline will add additional capacity in the basin.

The design engineers for the project were from a company called Professional Engineering Consultants, which was contracted by the Broken Arrow Municipal Authority, which all our city utilities fall under. In addition, the speed of the project and the nature of its design were in part determined by the Oklahoma Department of Environmental Quality consent orders that had been issued in conjunction with the project. The result was the fast-tracking of an extremely large project. We were going to be upsizing from a pipe with a 27‑inch diameter to a variable line with a minimum diameter of 48 inches and a maximum of 60 inches. Within that, we also had to keep the flows running on the trunk line. Portions of this involved bypassing: We had to keep the flow going through a bypass line so that we could do in-line replacement of certain sections. In some of those cases, we were bypass pumping as much as 5 MGD to keep the flows operational. In other sections, we were able to design it so that flows could continue through the existing line until the replacement line was complete, at which point we diverted the flow into the new section and abandoned the old line. These examples demonstrate the importance of the design aspects of projects that involve challenging topography and geologic systems. In this case, the line followed along the alignment of Aspen Creek and the easements of the prior sewer line, which presented the challenge of staying out of the creek itself and also led to subsequent dewatering and constructability issues. We also had to coordinate with the U.S. Army Corps of Engineers’ applicable 404 permits in this area, which meant adjusting our construction season to account for certain species of bats and beetles in the area.

Municipal Water Leader: What will the new pipeline be made of?

Ethan Edwards: The entire alignment will consist of PVC.

Municipal Water Leader: What were the advantages of using PVC pipe?

Timothy Robins: The plans were originally designed around fiberglass pipe. There were two manufacturers that were considered acceptable bidders, but in both cases the bids that came in cost more than the money the city had allocated for the project. At that point, we had to repackage the request for proposals. The major change we made was to designate that bid proposals had the option to use PVC pipe. This change ultimately led to significant cost reductions. There were other advantages, too, such as the ease of installation and inherent corrosion resistance that comes with using PVC. We compounded this by changing from coated-concrete manholes to fiberglass manholes provided by Containment Solutions Corporation. The overall contract was awarded to Arkansas-based Belk Construction. Its bid price was $16,048,115.86. The city council awarded the contract in June 2019 and issued a notice to proceed the following month. The expected substantial completion date is December 2020.

Municipal Water Leader: What role did soil and geological issues play in the design of the new line?

Ethan Edwards: The line runs close to an active creek, and the overall area has a fairly high water table. Those conditions, along with the corrosive soils that are present in the area, quickly ruled out certain materials, such as ductile iron pipe.

Timothy Robins: The proximity to the creek and high water table also required us to implement several dewatering plants during the installation of the pipeline. At its deepest point of alignment, the pipe was about 30 feet deep. Getting to that elevation near the creek and the river was difficult. In fact, the contractor’s trenching and excavation abilities were a significant factor in why it was awarded this contract.

Municipal Water Leader: How far along is the construction, and when is it expected to be complete?

Timothy Robins: The project is currently roughly 60 percent complete. The 60‑inch segment is complete, and we’re halfway done with the 54‑inch portion. Meanwhile, around 90 percent of the 48‑inch element is complete. We should be tying in with the existing line here in the coming weeks. The northern alignment should be completely done by September 1, and the pipe on the southern alignment should be all installed within the next 75 days. The clean-up is scheduled to conclude by December 1.

Municipal Water Leader: Where do you seek funding for your projects?

Ethan Edwards: The bulk of our water and sewer projects are funded through a loan program operated by the Oklahoma Water Resources Board. Also, the City of Broken Arrow has been quite progressive in passing general obligation bonds to help finance the costs of infrastructure projects, including those related to water, wastewater, drainage, transportation, and recreation. The most recent was a $210 million proposition in August 2018, which was the largest such obligation the city has ever passed.

Ethan Edwards is the director of engineering and construction at the City of Broken Arrow. He can be reached at eedwards@brokenarrowok.gov.

Timothy Robins is the construction division manager for the City of Broken Arrow. He can be reached at trobins@brokenarrowok.gov.

Water Management in Australia and Nebraska