In this interview, Randy Conner, commissioner of the Chicago Department of Water Management, speaks withMunicipal Water Leader Managing Editor Joshua Dill about how his agency is building a stronger, more efficient, and cleaner water system for the city.

Randy Conner: In university, I studied construction practices and engineering principles, and every summer I worked with my father, who owned his own construction company. He was the first minority contractor to do concrete work for the City of Chicago. In 1994, I consulted for an engineering consulting firm. In 1996, I began my career with the city as an engineering technician. I was in charge of the City of Chicago’s Aldermanic Menu Program, in which aldermen were given money to do infrastructure upgrades within their respective wards. Then I was put in charge of the Chicago Department of Transportation’s Engineering Division, overseeing about 15 engineers. We did new street construction design work and handled all the construction engineering issues for the Department of Transportation’s in-house crews. I then became deputy commissioner of infrastructure management at the Department of Transportation. I oversaw the entire public way for the City of Chicago, which involves pavement marking, directional signage, ticketing, and other things related to construction in the public way. In 2007, I became the first deputy commissioner of the Chicago Department of Street and Sanitation, which handles garbage pickup, snow removal, graffiti removal, and other things of that nature. I was charged with overseeing day-to-day operations as well as the administration of the department. In 2014, I was tasked to go back to the Department of Transportation as first deputy commissioner. I oversaw day-to-day operations and administration. In 2017, Mayor Emanuel tapped me to be the commissioner of the Chicago Department of Water Management.

Joshua Dill: Please tell us about the Department of Water Management.

Randy Conner: The department serves about 5.4 million people within the state of Illinois, which is about 42 percent of the state’s population. With approximately 2,100 employees, it is the largest nonemergency department in the city government. The department was created in the 1800s to ensure a supply of clean water. Built in 1869, the Chicago water tower was the city’s first pumping station and water purification plant. Of course, cities create waste, and there was a problem with waste being dumped into Lake Michigan. The city government decided to protect public health by developing a sewer system. Because the existing pumping station was so close to the shoreline, it was decided that a new water intake needed to be built further out into the water to avoid the risk of disease caused by the wastewater being dumped in the lake. From that point, as the city grew, more intake structures like the one I described would be built. Nine were built in total. Five are inactive at this point, two have been demolished, and two are still functional. One serves the Eugene Sawyer Filtration Plant at the southern end of the city, which is the oldest filtration plant in Chicago. The other serves the Jardine Filtration Plant, which is the second oldest and is also the largest water purification plant in the world. More pumping stations were also built to enable water distribution throughout the city. Today, there are 12 pumping stations connected by approximately 4,200 miles of water main. At different points in the city, we connect with suburban water suppliers. We actually sell water to 51 suburbs. They distribute water to customers downstream.

Joshua Dill: Does all of Chicago’s water come from Lake Michigan?

Randy Conner: Yes. All our water comes from Lake Michigan. We have the privilege of being located next to the world’s largest freshwater source. It makes it a lot easier for us to distribute and treat water.

Randy Conner: In 2011, when Mayor Emanuel was elected, he saw the need to update the infrastructure of the city of Chicago. He came up with a plan to replace approximately 880 miles of water main and to upgrade 4 of our pumping stations from steam to electric. We are approximately 75 percent done with that. We’ve got about 680 miles of water main replaced. We should be done in 2021, at which point we will have spent approximately $6 billion dollars on infrastructure upgrades.

Joshua Dill: How has the city funded those projects?

Randy Conner: We have made use of a number of different strategies. We have used clean water loans from the Illinois Environmental Protection Agency and used bonding through several sources in Chicago. We have also raised our rates four times. The first year, there was a 25 percent increase to really give the project a boost. Then, there were 15 percent increases for the next 3 years running. It wasn’t an easy thing to sell. We had to get it through our city council and through partners including the unions and other city agencies. Several conversations had to take place prior to the implementation of these rate increases. We were able to put a lot of people to work, both city employees and contract employees. Having a stronger water infrastructure allows the city to sustain growth, bringing more revenue to Chicago and increasing the tax base, which in turn allows us to keep rehabilitating our system.

Joshua Dill: Was it a challenge to communicate that to your ratepayers?

Randy Conner: It was a challenge. We had to have everybody buy into it. We held meetings with the city council and the suburbs, because our 51 direct-connect suburbs pay the same rates for water as Chicago residents do. They have to be on board as well, because the money that they provide pays not only for the water but for system maintenance as well. Those conversations took about a year.

Joshua Dill: How do your residential water meters contribute to water conservation?

Randy Conner: We realized that the level of Lake Michigan was falling. Even though it replenishes itself, it is not replenishing as fast as we hoped it would because of global warming and things of that nature. There is a general loss of water through the system itself. The water meters give us a great idea of how much water we’re actually taking out of the lake. We can only take so much water from Lake Michigan because of the Great Lakes Pact. Chicago is one of the only cities that does not have to put water back into the lake under the pact, but we do have to monitor how much water we take out.

Joshua Dill: What other environmental initiatives is the department working on?

Randy Conner: When we started the capital improvement program, we tried to replace pipe one for one. If we took a 12-inch pipe out, we put a 12-inch pipe back. Once we realized that this was not adequately addressing flooding, we started to look at this a little differently. We know that we are getting more frequent heavy rain events, and we want to ensure that the people of Chicago are not getting water backed up in their basements. We’ve started looking downstream to figure out how flooding issues work. Flooding on one block may be caused by a problem two blocks away. We need to make changes in our sewer system so that it can accommodate more water. We started saying, “Maybe our pipes should not be 12 inches—maybe we should upgrade to 14 inches.” We need to upgrade our system to accommodate the people who are moving into the city.

We know that Chicago has a lot of concrete and asphalt. As time goes on, there is more construction within the city, and as we get 100-year rains, there is more water going into the system. Knowing that the climate is going to keep changing, how do we keep some of this water on the surface or get it back into the ground more quickly and avoid overloading the system? We have a pilot program in which we are working with the Metropolitan Water Reclamation District of Chicago to mitigate flooding in one of the areas that frequently floods. We’re going to be adding backflow preventers, cisterns on private property, and water gardens and bioswales on private property. We’re also looking at different ways to pave our streets with porous asphalt so that the water goes through the asphalt and into the ground. We’re taking a look at redesigning our sewer lids to keep water on the street longer so that it doesn’t overtax the system.

We collaborate with the Metropolitan Water Reclamation District and the Chicago Public Schools on a program at grammar schools called Space to Grow. We take dilapidated playgrounds and turn them into raingardens and bioswales that give the kids a place to play and to learn. They help the kids understand water conservation as well as flooding. A holding tank underneath one of these projects can hold up to 100,000 gallons of water.

Joshua Dill: What are the department’s top issues today?

Randy Conner: Water conservation and water quality are always top issues. Chicago has always been a leader in research into water quality and distribution. We’re always looking at greener and more efficient ways to treat our water.

We all know about the water issues of Flint, Michigan. No one wants that to happen in their city. We work with the federal and Illinois Environmental Protection Agencies to ensure that we keep our freshwater sources clean and address any chemicals that get into the water. We want to address the issue of medicines being flushed down the toilet or otherwise entering the water. We’re also leaders in research on lead. We are conducting a study right now, the first of its kind in the United States, of the feasibility of replacing the city’s lead service lines. Chicago has approximately 400,000 service lines within the city; about 300,000 of them are still lead. We can’t just go in and replace the lines; we have to make sure that we’re doing it correctly and properly.

Joshua Dill: Do you do your research in house, or do you work with local universities?

Randy Conner: A bit of both. We do research in house through our Water Quality Division. We are part of a water innovation nonprofit called Current that researches what other countries and municipalities are doing. We also partner with several universities within the city of Chicago and Illinois as a whole. I sit on the board of the Water Research Foundation. 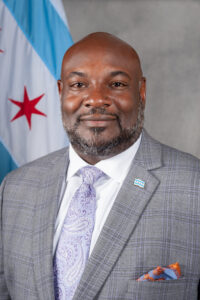 Randy Conner: Our job is to make sure that people have clean, pure water. Our vision is to continue doing that as well as helping to make the world more green. We’re undertaking an education campaign right now to get people to understand that even though we sit on the world’s largest source of freshwater, everyone has a part to play in keeping that freshwater clean.