On May 25, 2019, the crest of a record-breaking flood on the Arkansas River entered the state of Arkansas in Sebastian County. Caused by heavy rainfall in the Oklahoma region, the flood would overtop and breach several levees, causing damage to public and private property, severely disrupting freight traffic on the river, and posing a risk to private well water.

The Arkansas Department of Emergency Management (ADEM) was the agency in charge of the response. In this interview, ADEM Director A.J. Gary speaks withMunicipal Water Leader Managing Editor Joshua Dill about the historic flood and the coordinated response that his agency has led.

A.J. Gary: My background is mostly in law enforcement. I worked for the Conway Police Department in central Arkansas for 20 years. During that time, I worked in several different areas of law enforcement, including field investigations, narcotics, and the SWAT team. In 2000, I was appointed interim police chief of the City of Conway. In 2002, after 20 years, I left the police department and moved into the private sector, working as head of security for an international airline for about 5 years. I then went back to the Conway Police Department as police chief. I remained in that position for a little over 8 years, at which time I took a job with the State of Arkansas and was then appointed by Governor Hutchinson to be the director of ADEM as well as his homeland security advisor.

Joshua Dill: Please give us an overview of ADEM and its main duties.

We’re a 24/7 operation. We have duty officers taking calls day and night for events that may not rise to the level of a disaster, but which local authorities may need some additional resources to address. For example, a couple weeks ago, a hiker was lost for several days. The county in which he was hiking needed a helicopter a with forward-looking infrared camera to locate him. ADEM worked with the National Guard to get a helicopter in the air, and the hiker was found.

In large events like the recent flooding, we activate the state Emergency Operations Center (EOC) and use it to coordinate our emergency support functions (ESFs). We have 16 ESFs, which are coordinated by specific agencies, in this case known as lead agencies. For example, ESF-1 is transportation. During a disaster, our ESF-1 station coordinates all resources related to transportation. The lead agency for ESF-1 is the Arkansas Department of Transportation. The search and rescue support ESF is led by the Arkansas Game and Fish Commission. ESF-16, which covers cybersecurity, is fairly new. It is coordinated by the Department of Information Services. ESF-13 is public safety and security. It is coordinated by the Arkansas State Police, who also have a seat in our EOC. In between disasters, we’re training so that we are ready to carry out those functions when a disaster occurs.

Joshua Dill: How many employees does the department have?

A.J. Gary: ADEM is capped at 92 employees, but 16 of them are a part of our federal surplus property, which is a separate section. Some of our employees are dedicated to homeland security and some to emergency management. However, during a disaster, we pull from all the departments within our agency.

Joshua Dill: Please tell us about your experience with the recent flooding in Arkansas.

A.J. Gary: Before the flooding occurred, we started getting information from the U.S. Army Corps of Engineers and the National Weather Service that we were going
to have a significant rise in water that would lead to flooding along the Arkansas River. That allowed us to hold coordination calls with all the counties that would be affected and with their emergency management agencies beginning 3 days prior to the activation of the EOC. We worked to make sure that the counties had all the resources they needed. The Arkansas River enters Arkansas in Sebastian County, near Fort Smith, crosses the state in a line from northwest to southeast, and flows into the Mississippi River in Desha County in southeastern Arkansas. There were 12 counties in the area that would be affected by the flood.

On Saturday, May 25, we activated the EOC and brought in team members from ADEM and from the ESF lead agencies. Many of my staff have been here for many years, and they say that this was the first disaster for which we had all our ESF staff in the EOC. The EOC stayed activated through June 7. It was a pretty long activation, lasting a little over 2 weeks.

Joshua Dill: What was the division of responsibilities between your agency and other state and federal agencies?

A.J. Gary: I am deeply appreciative of our county and state agencies and the coordination, cooperation, and partnership they have engaged in from early on in this event. As I mentioned before, we did coordination calls with local officials before the water crested in its first entry point in the state of Arkansas. We had all our state agencies in the EOC. The Federal Emergency Management Agency (FEMA) was also involved from day 1. The Army Corps, the Arkansas National Guard, and our state geographic information service (GIS) office also had representatives in the EOC throughout this event.

The Civil Air Patrol flew the Arkansas River before and during the crest of the river. Its photos, combined with information provided by the GIS office in the intelligence section of the National Guard, allowed us to develop an intel briefing and a probable inundation map every morning. We could look at those maps several days ahead of the arrival of the crest of the river to see what critical infrastructure along the river would be affected. We also used the data to help with the recovery. They show the neighborhoods, residential areas, and critical infrastructure that were affected at crest both before and after inundation. Having a visual in front of you really helps.

Every morning, we had coordination calls with our counties about their needs. The counties that the crest had not yet reached were also on the call, so they were getting good intel about what was coming their way. We were actually moving sandbagging machines through the state ahead of the crest, giving our other counties time to get sandbags filled and deployed before the floodwaters reached them. The cooperation with state and federal agencies was key for the effective and smooth response to the flood.

Our governor was involved throughout this disaster. I was on the phone with him pretty much daily. When the river crested for the first time in Arkansas, the governor and I, along with federal delegates, flew up there and surveyed the damage so that we knew what we needed to request from the president in the federal declaration. Everything that I asked for, our governor approved immediately. That included additional sandbagging machines and missions with the National Guard.

Joshua Dill: Were the floods in Arkansas connected at all to the recent floods in Nebraska and Iowa, if only by being caused by the same weather patterns, or was the timing coincidental?

A.J. Gary: I don’t think they were connected. If I understand correctly, our flooding was mainly caused by heavy rainfall in the Arkansas River watershed around Oklahoma.

Joshua Dill: Would you tell us about the damage to property caused by the flooding?

A.J. Gary: We are still developing our estimates. The water reached its first crest in Arkansas in Sebastian County on May 25 and then slowly moved down across the state. We started doing some preliminary disaster assessments early on, as the water was cresting. We knew that the flooding would affect a lot of individual houses, as well as public infrastructure like roads and levees. Those early preliminary damage assessments allowed us to request a federal disaster declaration, which was granted. We are still gathering a lot of information for our individual assessment. Roughly 1,600 households were affected. FEMA’s individual assistance programs are up and operating. We’re still making registrations. To date, I think we have been approved for close to $7.6 million in individual household assistance; about $7.8 million has actually already been disbursed to those homeowners. We are still doing assessments of damage to infrastructure.

Of course, a lot of our levees along the Arkansas River have been affected. Some of those are maintained by the Army Corps; some are maintained by private levee boards. Some were overtopped during the flooding or breached and suffered significant damage. Even the ones that held, particularly here in central Arkansas, have undergone extensive damage and will have to be repaired. It seems that no serious damage has been done to water treatment plants located near the river. They may require some minor work.

A.J. Gary: This was record-breaking flooding, and we are we are still gathering information on the damage we sustained and what improvements need to be made. I think the key is improving our levees, which would reduce the risk to our critical infrastructure. 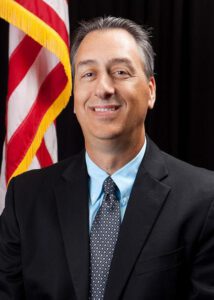 We are also emphasizing the importance of flood insurance, not only for publicly owned facilities but
for privately owned homes and businesses along our waterways as well. Unfortunately, we’re seeing that a little over 90 percent of the households affected by this flood did not have flood insurance.

I also want to encourage our cities and counties to use the flood maps we have developed for any future projects they have. If they’re looking to put in an additional water treatment plant or another piece of critical infrastructure, they should use these maps to ensure that the facilities will not be affected by future flooding.

A.J. Gary is the director of the Arkansas Department of Emergency Management. He can be contacted at publicaffairs@adem.arkansas.gov.