Twenty years in the making, Kansas City’s Turkey Creek Flood Control Project is marking the beginning of its last phase this year. The project addresses a flood -prone area adjacent to Turkey Creek, a tributary of the Kansas River that runs through the southwestern side of the city and Wyondotte County near Interstate 35 and Southwest Boulevard. Every 3–5 years, the businesses and homes in the creek’s corridor flood—in 1998, a flood overtopped Interstate 35 and caused millions of dollars in damage. 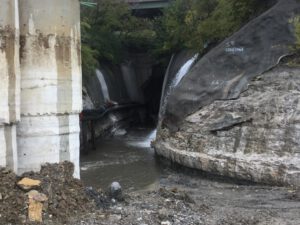 Having identified the flooding issues in the corridor, Kansas City, Missouri, and the Unified Government of Wyandotte County/Kansas City, Kansas, partnered with the U.S. Army Corps of Engineers to study and remedy deficiencies along the creek. That partnership has already resulted in the widening of the Turkey Creek channel, tunnel modifications, and the relocation of bridges.

This final phase involves the construction of intercepts on the northern end of the creek’s corridor that are intended to move stormwater down creek and away from residences, providing drainage sufficient to address a 15 -year storm.

Each partner brought money to the table to get this final phase in motion. Kansas City issued $7.3 million in general obligation bonds, the unified government contribution neared $3 million, and the Corps set forth $21.5 million in its latest work plan to cover the 65 percent federal cost share.

“This project represents the culmination of years of a successful partnership among the unified government; Kansas City, Missouri; and the Corps. The constructed channel has already saved the communities from severe damages, and we look forward to completion of this final phase,” said Kansas City Water Director Terry Leeds. Facilitating Flood Control in Kansas City: The Turkey Creek Project The placement of concrete for the last 70 feet of dual 10′ x 9′ box culverts at the Turkey Creek Project. The construction of this project will help reduce the risk of floods in this part of the Kansas City area.