Dr. Tim Petty, assistant secretary for water and science in the U.S. Department of the Interior, is responsible for the Bureau of Reclamation and the U.S. Geological Survey (USGS), and consequently, for a wide variety of issues related to water infrastructure, water resources, energy, ecosystems, and natural disasters. This broad scope naturally brings Dr. Petty into contact with many other federal agencies. In order to better coordinate their vital tasks, Dr. Petty and other officials at the assistant-secretary level have assembled an informal water subcabinet that meets monthly to discuss, plan, and execute water-related projects.

In this interview with Municipal Water Leader, Dr. Petty explains how the coordination enabled by the water subcabinet leads to progress and shares his outlook on 2020.

Tim Petty: I have been assistant secretary for water and science in the U.S. Department of the Interior for nearly 2 years. During the Bush administration, I was deputy assistant secretary for almost 4 years under Secretary Kempthorne. Then I went back to the Hill and spent 9 years with Senator James Risch of Idaho. When the Trump administration came in, I went through the normal process of getting selected and confirmed and started in January 2018.

I was born and raised in northeastern Indiana on a family farm. I attended public school there, did my undergraduate studies in geoscience at Purdue University, and got a master’s in international business administration at the University of Maryland Global and a PhD from the University of Alaska Fairbanks’s School of Engineering and Mining. My dissertation was in water science and policy. You can find my research, which is mainly on surface hydrology, in three published articles that are available on Google Scholar.

Municipal Water Leader: Please tell us about your work at Interior and your responsibilities as assistant secretary for water and science.

Tim Petty: The water part of water and science is Reclamation. The science part is USGS. USGS has about 8,000 employees and staff in all 50 states as well as the islands that Interior is responsible for. Reclamation manages water in the 17 western states.

Municipal Water Leader: What are your top issues for 2020?

Tim Petty: The primary issues for Reclamation are water infrastructure, water resources, and title transfer. For USGS there are three top priorities: energy and energy resources; biology ecosystem corridors; and hazards, including earthquakes and volcanoes. The Presidential Memorandum on Promoting the Reliable Supply and Delivery of Water in the West, which came out in October 2018, provides further specific areas of work. Each section breaks down key components and water basins, including the Columbia River basin and basins in California. Part of that memorandum that will be critical for the Colorado River is section 3, which deals with forecasting and modeling. Work on that will be undertaken by both Reclamation and the USGS. In November 2019, the USGS announced that it was implementing its next-generation water monitoring program in a second large water basin, the Upper Colorado basin. The first was the Delaware River basin on the East Coast. That program will involve partnering with a lot of other federal agencies, including the National Oceanic and Atmospheric Administration (NOAA), which is part of the U.S. Department of Commerce; the U.S. Department of Agriculture (USDA); and the U.S. Army Corps of Engineers.

Municipal Water Leader: How will those new forecasting and modeling activities change the operations of water agencies in the West?

Tim Petty: It’s going to be a huge resource for all the different water agencies—not only Interior, but the U.S. Environmental Protection Agency (EPA), the USDA, the U.S. Departments of Energy and Commerce, NOAA, and the Army Corps as well. Good examples of what Reclamation is trying to forecast include how snowpack affects spring runoff, how heavy rainstorms affect inundation, and drought. That is done basin by basin. Last summer, the Mississippi basin had more water than it knew what to do with, while right next door, the Colorado basin was still in a 19-year drought cycle. Forecasting is aimed at understanding how weather and water resources will affect each of those basins.

Municipal Water Leader: Please tell us about the water subcabinet that you form a part of.

Tim Petty: It started when a number of officials at the assistant-secretary level realized that we needed to connect with other federal agencies. It’s so easy for each of the agencies and assistant secretaries to get consumed by the work at hand and wall themselves in. As a new assistant secretary in early 2018, I wanted to make it a priority to ensure that I was able to pick up the phone and call other officials at my level in other agencies. David Ross had just become associate administrator of the water division of the EPA, and within a month or two, Bill Northey was appointed under secretary for farm production and conservation at the USDA. We started meeting on a monthly basis. Pretty soon, Dr. Tim Gallaudet at NOAA heard about our meetings and wanted to join. Then R.D. James at the Army Corps started joining us, followed by Daniel Simmons from the Department of Energy, who was confirmed in early 2019. Our goal is to meet monthly at the assistant secretary/ under secretary level, joined by critical deputies or plus ones, with the purpose of trying to solve problems, which is this administration’s task. With no official title of any sort, this group has become known as the water subcabinet.

In section 2 of the president’s October 2018 memorandum, he mandates that one agency should be designated the coordinating lead for the Endangered Species Act and National Environmental Policy Act compliance requirements of each relevant major water project. The water subcabinet is helpful because as assistant secretaries and undersecretaries, we can discuss who the best lead is and can commit to helping make sure the whole project is successful.

The water subcabinet is also important because some federal agencies have missions that are apparently at odds with each other. If you look at their bylaws and requirements, Reclamation is required to hold water and the Army Corps is required to dump water. Those congressional mandates put us at odds and can create conflicts. Yet that’s absolutely the opposite of the way that things should be. We’ve got to be working together. Meeting regularly helps ensure we do that.

Municipal Water Leader: What have been some of the primary focus areas of the water subcabinet?

Tim Petty: They include water infrastructure, water supply, and water quality. Data modeling and forecasting is also important. We also have different geographic priority areas at different times of year, including the Great Lakes, Florida, the East Coast, the West Coast, the Midwest river basins, and the Gulf of Mexico.

Municipal Water Leader: How has your coordination through the water subcabinet helped foster progress in some of these areas?

Tim Petty: We recently finished the biological opinions from both National Marine Fisheries Service and the U.S. Fish and Wildlife Service on the Central Valley Project in California, which took multiple years. As I mentioned before, we agencies collectively designated an employee from one agency to be the coordinating lead in this process. We’re also working on a biological opinion for the Columbia River and a National Drought Report, and we recently signed a memorandum of understanding between Reclamation and the EPA that ties into some of our Water Infrastructure Finance and Innovation Act projects. EPA has, for several decades, provided resources and funding for these projects. Now that Reclamation is able to coordinate with it more closely, this coordination will transform water infrastructure projects.

Another good example of progress was the response to a tunnel collapse in Wyoming this summer. More than 100,000 acres of irrigated land was in peril. The relationship between USDA and Interior, and the coordination the water subcabinet provided, enabled us to address the problem in record time and help the agricultural community and the irrigators. Working together in the water subcabinet also helps us be more effective in our communications with the states, with

governor’s offices, and with local entities.

Tim Petty: The federal action plan came out in June 2019. NOAA is the lead agency for forecasting and modeling, and Dr. Tim Gallaudet of NOAA and I were the cosigners of this document. In the document, we gave ourselves milestones and metrics and committed to meeting them by specific dates and times. It includes everything from water forecasting and water management toolsets down to specific projects and dams. As part of the action plan, we are working on control manuals and finding new ways to work with the Army Corps to manage water. For example, while the Army Corps might usually be in the business of dumping water to avoid the risk of flooding, if we know that we’re going into a drought season, we should instead save that water and use it for other purposes, including species habitat.

Municipal Water Leader: Would you tell us about some of Interior’s plans to help build drought resilience?

Tim Petty: That actually brings us back to forecasting and modeling. We are working with USDA on the National Integrated Drought Information System and its remote sensing tools, as well as supplying water to drought-affected areas.

Earlier this year, we worked on a draft water reuse plan with the EPA, which was the lead agency on the project. The draft plan, which is out now, ties into Reclamation’s WaterSMART program as well as the Water Infrastructure Improvements for the Nation Act passed by Congress several years ago. Water reuse is critical, especially in drought-stricken basins like those in California. We toured some desalination projects there. The Department of Energy’s Office of Energy Efficiency and Renewable Energy has been helpful in implementing those projects, because it has the resources and technology to implement water reuse, both for grey water and potable water. If we continue to figure out the energy and technology factors, the cost of desalinization will continue to decline. Agriculture is one of the biggest water users by volume; if we can start using reuse water for agriculture in the future, it will be a game changer.

Tim Petty: My vision of the future comes from the great men and women who are part of Reclamation and USGS. They are the ones who are on the ground and who know what’s going on and what the needs are. I listen to them and bring those ideas all the way up to the secretary and the president’s office and implement them. The western water memorandum that the president signed came out of the needs of multiple agencies. We needed some leadership to get us across the finish line. My vision is to improve how we manage water resources in the future, benefiting both people and ecosystems and keeping communities moving forward.

Dr. Tim Petty is assistant secretary for water and science in the U.S. Department of the Interior. 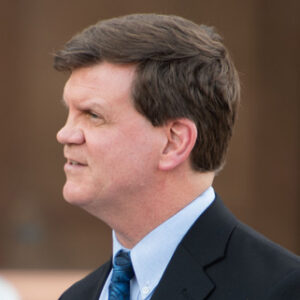