For many people, the history of water in the West centers on early-20th-century events like the construction of Hoover Dam and the California water wars. In fact, that history goes back to the times when Native Americans were the only residents of what is now the western United States. The full scope of that history, in all its social, political, and legal detail, is at the heart of the courses Professor Matt Makley teaches at the Metropolitan State University of Denver. In this conversation, Dr. Makley tells Municipal Water Leader about this fascinating history and its continuing importance.

Municipal Water Leader: Please tell us about your background.

Matt Makley: I was born and raised in California in the Lake Tahoe region. I moved throughout little farming communities in the Sierra Nevada, such as Minden, Nevada. I went to Northern California for a while, and then my studies took me to Arizona, where I got a PhD at Arizona State University in American Indian history. I studied with a gentleman named Peter Iverson, who unfortunately passed away this past spring. He was a gracious man who worked for most of his professional life with the Navajo, or Diné. He would take students up to Diné country, and we’d spend time with Navajo families and get to know the people and the landscape. That process triggered an interest in water for me. My specialty is Native American history, but I’m particularly interested in the water aspects of that history. I credit Peter for getting me started on that path. He had us read Daniel McCool’s books on Indian water law. Today, with the drought we’re experiencing in the West, there’s a big need for conversations between First Nations and the representatives of the governing structure of the water management system. The latter have a lot to learn from the people who’ve been here the longest. My professional expertise is in modern Indian history, which has a lot of law ingrained in it, and I’ve been training myself on the water side for the last decade or so.

Municipal Water Leader: What is the name of the course you teach?

Matt Makley: Colorado Water and the American West. I made the title general, because I wanted the class to be about Colorado water, but I also wanted to frame it within the larger context of the West. There is a unit in the course that deals with Los Angeles water as a case study. We look at the history of the Owens River Valley all the way back to the era when it was primarily inhabited by the Northern Paiutes. Anthropologists have been able to establish that they practiced what we might call protohorticulture. They would steer the water to feed the grasses, seeds, and crops that were important to them. That is not something that makes a mark in the archaeological record. It makes me wonder how many other indigenous people did that. We then look at the farmers in the Owens River Valley and how William Mulholland and Los Angeles came up there and got all the water rights. Then we compare that history to how Denver’s water system came into existence. It’s fun to compare western cities, underscoring the reality that, as Edward Abbey said in his book Desert Solitaire, it’s not that there’s not enough water where we’re building, it’s that we’re trying to build where there’s not enough water.

Municipal Water Leader: You start out at the very beginning and you come into modern times, correct?

Matt Makley: Yes. I’m deliberate about starting with the pre-European native experience of water. We look at a couple of case studies, one of which centers on Ancestral Pueblo people. Then, we get into the early mining period in Colorado. It’s critical to establish the contextual information about how the law of prior appropriation was born in Colorado. The class focuses a lot on prior appropriation, and once we have that idea in place, we start to look at the relationship between the federal government and western water users in creating our shared society.

We do a case study of the massive tunnel built off the Gunnison River in the Black Canyon. We also look at Hoover Dam and the creation of the western water system. We come as close to the present day as we can. We deal a little bit with transbasin diversions—for example, the removal of water from the western slope of the Rockies, which really belongs in the Colorado watershed, and its transport to reservoirs east of the Rockies, where it can support the massive populations of eastern Colorado. We also look at the Ute Water Settlement Act, which started in the 1980s and continued into the 2000s. It is a recognition of native water rights based on an early 1900s U.S. Supreme Court ruling that grants Native American tribes prior appropriation through the Winters Doctrine.

Municipal Water Leader: How long have you been teaching this course?

Matt Makley: It started about 7 years ago. We turned it into this self-paced online course. The class and this certificate program have been attracting wonderful minds. The classes are full of people who have a lot of experience in western water; I learn from them, and they talk to and engage with one another through a chat function. I hope that my passion for stewardship comes through. Tom Cech at the One World One Water Center wants that to be at the heart of what we’re doing at this unique university, which has a diverse student population with a lot of nontraditional and first-generation students. These will be the people who help solve our water problems over the next few decades.

One of the primary points to address are the problems we face today on the Colorado Plateau. Over 40 million people are dependent on water from the Colorado River, and right now, Lake Mead and Lake Powell are lower than they’ve ever been. We’re going to have to have difficult conversations about curtailment. I’m passionate about saying, “Let’s open up that conversation.” We need all interested groups and water users to take part, especially our native communities, because they have a connection to this place that goes back much further than that of nonnatives. If we take the time to listen, they can talk to us about the cycles of drought and how their ancestors dealt with them. We have conservationists, recreationalists, farmers, ranchers, and mining interests all in the same room. It’s a rich dialogue, and that’s going to be the path forward for us.

Dr. Matt Makley is a professor in the department of history at Metropolitan State University of Denver. He can be contacted at mmakley@msudenver.edu or (303) 615‑0793. 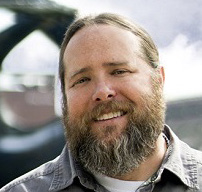