Dr. Elizabeth McVicker’s Water Law course is one of the three that make up the Water Studies certificate program at the Metropolitan State University of Denver (MSU Denver). It takes a broad view of hydrology, history, and legal doctrine and gives students a fundamental understanding of water law in the West, including the prior appropriation principle. In this interview, Dr. McVicker tells us about her background and how she came to teach this class.

Municipal Water Leader: Please tell us about your background.

Elizabeth McVicker: I’m a Colorado native. My mother’s family is from Texas, and that is where I went to high school and college. My father, Roy McVicker, was an attorney and was a Colorado state senator and a U.S. congressman from Colorado during the 1950s and 1960s. He was a state senator from 1954 to 1964 and served in the U.S. House of Representatives from 1964 to 1966. He was a Democrat and rode Lyndon Johnson’s coattails to Washington. He represented the fourth district, which at the time was called the donut district and included all the counties around the city and county of Denver. He then came back and ended up heading up continental research for part of the administration outreach into Mexico and Central America. He was in love with the Rocky Mountains, so I spent my childhood going to the Rocky Mountains with my dad; listening to Beethoven; and walking and going fishing on the Arkansas River, the South Platte River, and the tributaries of the Colorado River.

After getting a master’s from Johns Hopkins University and a PhD from New York University in Spanish, I came back to Colorado and taught language courses at the University of Denver (DU) and the University of Colorado. Because my father and my grandfather from Texas had been attorneys, my husband suggested I try law school. I decided to go to the DU College of Law, where I got a chancellor scholarship in the public interest because of my interest in environmental matters.

Our water resources here at the top of the world are limited. In Colorado, every drop of water flows out of our state, and we have obligations to deliver water to other states under 19 different compacts. The Colorado River is on everyone’s mind right now because of the aridification of the Southwest. About 40 million people in this region rely on the river’s limited supplies. That really drove me to learn about the intricacies of Colorado water law. The prior appropriation doctrine is also known as the Colorado doctrine, and it derives from miners’ law and the experience of the California gold rush of 1849 and the Colorado gold rush of 1859.

I also believe in collaboration. I did a lot of mediation right out of law school. It didn’t take me long to realize that repeating the water wars that happened in Colorado in the 1800s, in which people lost their lives, was not an option in the context of the burgeoning population of today’s Colorado. I was fortunate to study water law at the DU College of Law with John Carver, who was the U.S. secretary of the interior under John F. Kennedy and Lyndon Johnson. He pushed me to delve further into water rights, water law, water obligations, and the underlying importance of collaboration.

In the early 1980s, my husband and I bought some land in Park County at about 10,000 feet on the tributaries of the South Fork of the South Platte. We had the opportunity to buy some water rights and were up against a wealthy developer by the name of Pat Broe. It taught me a lot about how prepared you have to be if you’re going to fight over water instead of seeing it as a public resource. In that water fight with Mr. Broe, I got to know a managing partner at Holland & Hart by the name of Anne Castle, who was later the deputy secretary of the interior in the Obama administration under Ken Salazar and is now a fellow with the Getches-Wilkinson Center for Natural Resources Energy and the Environment Water Research Institute. She has been generous with her time in helping me as a co-teacher.

Municipal Water Leader: How did you start teaching as part of the Water Studies certificate program?

Elizabeth McVicker: I’ve been teaching different courses online since 2001, and I began teaching this Water Law class when MSU Denver received a generous gift to start a water studies program for undergraduate students. I had the good fortune of being instrumental in forming the One World One Water Center (OWOW) and coming up with the curriculum for the minor there, and of course I insisted we have a Colorado water law class. MSU Denver does offer a water law class through the atmospheric environmental studies program, but water law up to about the 100th meridian is based on riparian rights, which are based on proximity to a stream or body of water, while beyond the 100th meridian, it is based on prior appropriation. Historically, it became obvious that there was no way riparian rights were going to work past the 100th meridian. The Colorado doctrine is a repudiation of riparianism. Terry Bower decided to move forward with this program because the OWOW was getting so many requests for a water certificate program that was not tied to an undergraduate studies program.

Municipal Water Leader: What is the name of your course?

Elizabeth McVicker: It is called Water Law, but it is focused on Colorado water law. We start the class with the broad context of hydrology. Another class in this program digs deeper into the science, but I set the stage for that. We look at geology, hydrology, history, and riparianism in order to compare and contrast it with the Colorado doctrine.

People wonder what their everyday actions have to do with whether or not somebody in California is going to be able to grow strawberries, whether the town of Fountain is going to have to cut off taps because there’s no water, why Bloomfield is now charging $30,000 for a tap, or why irrigators in the lower South Platte are angry because Colorado passed a law that allows for rain barrels. Educating our citizens is key. People are intimidated by the idea of prior appropriation and even the word law. This certification program is designed to help.

The Center for Teaching and Learning Design at MSU Denver helped me bring together the historical, geological, and hydrological viewpoints and to focus on the basics of tributary and nontributary water, the history of the Colorado doctrine, the interstate compacts we have entered into over the years, and the role of ethics.

Municipal Water Leader: What kinds of students take this course?

Elizabeth McVicker: Many different kinds. We have had women from smaller towns in Colorado who have come to study and then decided they were going to serve on the water board of Castle Rock or Evergreen. A water sommelier actually took this class while starting up a business. We had someone from Hawaii who was concerned with the U.S. Supreme Court case County of Maui v. Hawaii Wildlife Fund, which dealt with groundwater injection. She took this class so that she could push that Supreme Court case forward as an activist. We have had students from the U.S. Forest Service and from a Colorado-based organization called the Coalition of the Upper South Platte, which was formed to protect the South Platte River from runoff caused by the 2002 Haman fire and by subsequent fires. My class is focused on Colorado water law, the western United States, California, Arizona, and Texas, and it is for developers, farmers, and anyone who turns the tap on and hopes to have water come out.

Municipal Water Leader: What is the format of the course?

Elizabeth McVicker: It is all online. The course is self paced, so somebody could do it in a week or in 4 weeks. We used to offer it over the course of 15 weeks, but since it is a pass/fail course that attracts mostly professionals, I would lose some of my students over that time. There is a review section that helps the students go over the readings. I provide optional discussion questions. The class also provides guidance for further resources students may want to consult. Colorado has organizations such as Water Education Colorado and the American Water Resources Association, for instance.

Dr. Elizabeth McVicker is a professor at the Metropolitan State University of Denver. She can be contacted at emcvicke@msudenver.edu. 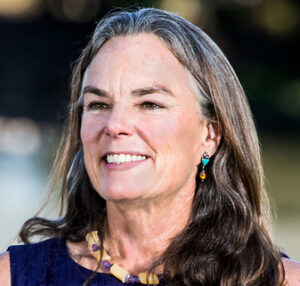 The Advantages of the P3 Model