Storm rainfall can be a nightmare for municipalities with combined sewer systems, causing water accumulation in unwanted areas, overflows along streets, and localized flooding. Such was the case for the City of Atlanta in the early 2000s. The city struggled to accommodate unpredictable pressure during storm events, which often caused combined sewer overflows in and around the Fourth Ward neighborhood.

While the city was initially planning to fix the sewer capacity problem by laying more pipe via a tunnel extension of the sewer system, concerned citizens petitioned the city to investigate another idea that would transform the blighted industrial lowland into an urban green space and public park with built-in storm water control features. In 2008, this creative solution was made possible through the collaborative efforts of Atlanta BeltLine, Inc.; Atlanta’s Department of Watershed Management; and Atlanta’s Department of Parks and Recreation.

Tyler Young, a writer for Municipal Water Leader, spoke with Robby Bryant, planning and landscape architecture discipline leader for HDR, Inc., about how engineering and architecture came together to create a new park that is not only an important part of Atlanta’s water infrastructure, but is also an aesthetically pleasing and popular gathering space for the community.

Tyler Young: Could you please tell our readers about the Historic Fourth Ward Park project?

Robby Bryant: In the early 2000s, the city of Atlanta, like other cities, was exploring solutions to help address combined sewer overflows. One way to accomplish this was to increase capacity within the sewer system by building underground tunnels to accommodate storm flows—that was the original plan for the Fourth Ward neighborhood, and it was estimated at $40 million. Another solution was to reduce demand on the system by capturing and containing storm runoff during peak events. This idea was embraced by the community. Soon after, planning efforts were underway to develop a storm water pond (providing capacity relief for the sewer system) within a park that would also be a muchneeded amenity for the neighborhood.

Next, the City of Atlanta’s Department of Watershed Management (DWM) developed an important partnership with Atlanta BeltLine, Inc. (ABI). ABI was already planning to build a destination park near this location. Working together, DWM was able to meet the goal of capacity relief and ABI was able to expedite the development of one of its first signature parks.

In 2007, HDR was selected to design the first phase of Historic Fourth Ward Park, which included a retention pond that would capture storm water runoff and would also be the centerpiece of a new BeltLine park.

The concept for Historic Fourth Ward Park was simple, but designing a retention pond as an aesthetic feature was a little more complicated. Additionally, each partner on the project had different goals for the outcome—DWM was trying to resolve the combined sewer overflow issue, ABI wanted to build a signature park, and the Atlanta Parks Department was concerned about the maintenance that would be required once it was completed. Fortunately, there was a good working relationship, and each group was willing to take time to consider how to proceed in a mutually beneficial way.

Through public meetings, HDR’s design team began to understand the community’s expectations for the park. These expectations had to be balanced with the storm water storage requirements. We wanted the park to provide a place for people to gather and recreate like any other urban park, but we also recognized that this was a unique multifunctional space that should celebrate water, since the retention pond was its centerpiece. These principles helped to guide the park program and eventually led to the framework for the park layout.

All design decisions were looked at from three sides: functionality, design, and maintenance. For example, the pipes, culverts, and headwalls were hidden from view, and the channels that would convey water were artistically designed to be attractive features within the park. Native and locally adapted plants provide a wildlife habitat and minimized long-term maintenance. The clearly defined goals and collaborative team approach are what made this project unique. 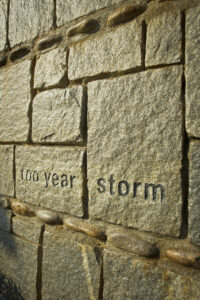 Robby Bryant: HDR is unique in that it has an in-house partnership between award-winning designers and nationally recognized engineers. HDR’s design team for Historic Fourth Ward Park was led by landscape architects working in close coordination with water resources and structural engineering staff. This allowed our design team to ensure that the placement of park elements met complex engineering requirements.

One example was how we decided where to locate park facilities with various flood events in mind. When designing the hardscape areas, it was determined that the perimeter path around the pond should be set at the 5-year storm elevation, while the other plaza spaces in the park would be located above the elevation for 25-year storm events. This reduces long-term maintenance requirements by limiting the frequency at which the public spaces are inundated.

Looking through the hydrographs with the engineers also inspired an educational element in the park. The placement of riverstone flood markers along the granite walls circling the park allows visitors to imagine what a 500-year storm would actually look like.

Tyler Young: What were some of the big challenges that you faced?

Robby Bryant: One of the biggest challenges was rethinking traditional techniques for retention pond design. This was also one of the most rewarding aspects of the project, because it forced the design team to search for a collaborative solution.

It was important to the project team that the pond not be enclosed within a fence. The proposed solution was to create a natural planted buffer that would separate the public walkway from the water. A 12-inch-deep littoral shelf was designed along the water’s edge with dense vegetation on the slope around the pond. All told, 22 feet separate the walkway’s edge from the point where the water starts to slope down. This design solution accomplished the regulatory requirement of keeping people safely separated from the water without using a fence.

Another challenge was concealing the outlet control structure. The design team developed a custom-designed outlet box that is built into a retaining wall and disguised using sculptural artwork and a recirculating fountain. There is easy maintenance access through a plaza behind the retaining wall.

Tyler Young: How has the community accepted the park?

Robby Bryant: The community has really embraced the park. It’s a popular destination because of its proximity to the BeltLine and Ponce City Market, so plenty of residents live within walking distance. ABI has done a great job programming activities and festivals in the park throughout the year; there’s even the occasional wedding on the performance stage overlooking the pond. It’s great to see the amount of activity in and around the park; there are almost always people strolling through, walking dogs, or just people-watching from one of the many seating plazas.

Tyler Young: How has the pond relieved the stress from the sewer system?

Robby Bryant: It was determined early in the design process that nearly 7 million gallons of storm water runoff could be captured within the park. By containing this excess runoff in the pond and releasing the stored volume in a controlled manner, the sewer system is able to maintain capacity. The functional aspect of the pond is another design benefit: It provides an educational look at storm water, through its conveyance in the open-stream channels and also through visible fluctuations in the pond level. That’s an aspect of storm water management that is often overlooked when pipes are buried and ponds are located out of view behind fences.

Robert Bryant is the planning and landscape architecture discipline leader for HDR. He can be reached at robby.bryant@hdrinc.com.