Since its founding in 1989, the Sacramento Area Flood Control Agency (SAFCA) has been a catalyst for the development of flood protection projects in the Sacramento, California, area. As the local cost-sharing partner, SAFCA continuously looks for ways to support the U.S. Army Corps of Engineers, the state of California, and the Bureau of Reclamation to implement new solutions and modernize existing infrastructure. Given its size and the fact that Sacramento is the most at-risk city in America for riverine flooding, SAFCA’s efforts are critical to public safety.

Kris Polly, Municipal Water Leader’s editor-in-chief, spoke with Rick Johnson, executive director of SAFCA, about the role the organization plays in flood protection projects. Throughout the interview, Mr. Johnson speaks about SAFCA’s mission, its involvement with the Folsom Dam Auxiliary Spillway Project, and its efforts to better prepare for future flood events.

Kris Polly: Please give us some background about yourself and your career.

Rick Johnson: I worked with the Bureau of Reclamation for 20 years and the U.S. Army Corps of Engineers for 10. In 1979, I started work with Reclamation on the Central Arizona Project and then moved to the regional office in Sacramento in 1984. I stayed with Reclamation until 1991, and then I went to the Corps until 2000. I went back to Reclamation in 2000 to work at Folsom Dam. I retired from federal service in 2010 and have been at SAFCA ever since.

Kris Polly: Can you tell us a little about the history of SAFCA, and why it was formed?

Rick Johnson: In 1986, two major events led to SAFCA's formation. We had a huge flood of record in the Central Valley of California where Sacramento is located. We had a lot of flooding and failing levees in the region, but we were able to flood fight and narrowly avoided levee failures in the high population urban areas. That same year, President Ronald Reagan and Congress passed legislation requiring nonfederal cost sharing for federal flood control projects. Prior to 1986, the Army Corps’ flood control projects were 100 percent federally funded. By state law, the nonfederal cost-sharing partners for projects in the Central Valley of California would be the state of California and a local government. Since the watershed does not really follow any city or county boundaries, SAFCA was created in 1989 as a joint powers authority to serve as the local cost-share agency.

Kris Polly: How does SAFCA work with the federal and state partners?

Rick Johnson: Currently, the normal cost share for a flood control project is 65 percent from the federal government, 24.5 percent from the state, and 10.5 percent from SAFCA (local). With Army Corps projects, the nonfederal partners are also responsible for land easements and rights-of-way, which often result in a higher cost share for the nonfederal sponsors. Basically, the way it works is that the nonfederal partners obtain all the land and rights-of-way needed to construct an Army Corps project. We, in coordination with the state, fill that role and also provide planning and engineering support as needed.

Kris Polly: How have the standards for building the levees changed?

Rick Johnson: In 1997, we had another major flood event in the Central Valley. There were over 30 levee breaches in the system. As a result of those breaches and what happened after Hurricane Katrina, there were a number of studies completed that analyzed levee performance and failure mechanisms. One study, completed in 2007, looked at the last 100 levee breaches around the country and found that 80 percent of them were from geotechnical failures, primarily from seepage through and under the levees, as well as from erosion.

As a result of the studies conducted, new federal and state standards for levees in urban areas were imposed. The biggest one is addressing seepage under the levees. Past industry thinking was that if a hydraulic path was long enough, seepage under the levees would not cause problems. The studies determined that this was not the case. Instead, it found that underseepage caused material to be displaced, creatingvoids under the levee. The primary method currently used to address this is the installation of cutoff walls within the existing levees, which involves digging a 3- to 4-foot-wide trench up to 120-feet deep and filling it with a bentonite or cement-type slurry mix. This creates a less permeable yet somewhat flexible wall that prevents water from creating a path underneath or through the levee during flood events. 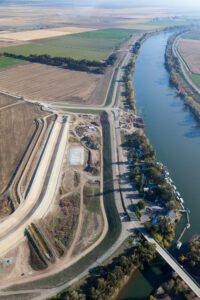 The other major item is addressing the problem caused by the California Gold Rush— erosion. There was a substantial amount of hydraulic mining that took place in the canyons upstream of Sacramento, and for decades, the material from that activity would come down the river. When the levees were originally built, they were placed close together to create higher water velocities so that the material would keep moving. We have since built a couple of dams upstream, which have cut off new material from coming down. Now, the rivers are still trying to feed themselves and move material. They have already worked down to bedrock and are now working sideways toward the levees. To prevent erosion of the river banks that ultimately erode into the levees, we are attempting to harden our river channels, but we have to do it in a way that is environmentally friendly because there are a lot of endangered species that exist in the waterways.

Kris Polly: What kind of role does SAFCA play in the Folsom Dam spillway project?

Rick Johnson: Number 1, we are cost-share partners. We have been actively participating in that role from the beginning by providing about 10.5 percent of the project funding. In addition, we have at critical times provided additional engineering and design support, including contracting with outside consulting firms to support Army Corps design efforts. A good example of this is when the project required a complete redesign right before construction was anticipated to begin. The dam was built in the 1950s with eight river outlets located in the lower portion of the dam and larger spillway gates located at the top of the dam. The dam was originally designed using rainfall records that existed at the time, which only went back to 1906. We have learned since then that the rainfall records used at that time reflected a drought period. Since Folsom Dam was built, we’ve had eight storms that were larger than the dam was designed to support. We quickly learned that the dam was undersize.

The dam’s lower eight outlets were capable of releasing 30,000 cubic feet of water per second. However, the river channel downstream was capable of safely carrying 115,000 cubic feet of water per second. To match the downstream capacity, dam operators had to wait until the reservoir filled to the top of the dam to release more water through the spillway gates, thus using up all the crucial flood control space behind the dam.

To address this, the Army Corps originally proposed enlarging the lower eight outlets so they could release more water during the early part of a storm event and make better use of the available flood space. At the same time, Reclamation was completing designs on a shallow, wide auxiliary spillway with a fuse plug to prevent the dam from overtopping and failing during large flood events. After receiving federal authorization and completing its design work, the Army Corps went out to bid. The bids came in three times higher than government estimates, which essentially stalled the project.

At this point, the Army Corps, Reclamation, the state, and SAFCA quickly began working on a new design approach. The concept was to take the auxiliary spillway being designed by Reclamation and make it narrower and deeper and gate it. This way, it could still address Reclamation’s requirement to prevent dam failure a well as the Army Corps’ requirement to provide higher flood releases before the reservoir was full. Because the federal contracting process can be lengthy, SAFCA was able to help expedite the effort by funding design consultants for both the Army Corps and Reclamation to use.

The redesigned project, just completed last year, includes a new dam and an auxiliary spillway that addresses the needs of flood control and dam safety.

Kris Polly: How is SAFCA funded?

Rick Johnson: SAFCA does not receive any tax dollars, so we ask property owners to approve assessments to fund our local cost share. Under California state law and guidelines, we ask individual property owners who live in the floodplain to vote on property assessments that would fund projects that benefit them. How much each property owner pays depends on the benefit they receive, which is determined by the potential depth of flooding in their location and the value of property damage prevented by the flood control improvements. SAFCA then issues bonds against the assessments to fund projects.

Kris Polly: Are there any top challenges that SAFCA is addressing?

We are pushing hard to get our projects through quickly to better protect Sacramento. Looking at the plans we have in place, we are essentially rebuilding an entire system. We have had six federal authorizations addressing most of the components of the system; this represents $4.4 billion in authorized projects, with $2 billion already constructed and in the ground. Our biggest challenge is trying to maintain funding to keep these projects moving. Once the projects that are currently authorized and under construction are completed, they will provide us around a 300-year level of protection. But we are not stopping at this level; we are looking at what else is needed to protect us against a 500-year flood event. Over the last couple of decades, the weather patterns have changed and are not represented by the earlier period of record. We just went through 5 years of extreme drought and then had one of the wettest years on record year. We are seeing the extremes on both ends and trying to stay ahead of them.

Kris Polly: What is your message to Congress based on your experience with SAFCA and other projects?

Rick Johnson: Folsom Dam was built in the 1950s, and it was not until the 1986 flood event that we actually started to modernize our facilities. You look at what happened with Hurricane Katrina and look at what they are spending to rebuild the system in New Orleans. For just a fraction of the cost, we can prevent a similar event from occurring. I think Congress needs to recognize that infrastructure wears out, becomes obsolete, and needs upgrading. We probably have the most active member of Congress when it comes to flood control, Congresswoman Doris Matsui, who spends hours every week working on our behalf. Having a member of Congress that is devoted to our cause both here and in Washington, DC, is invaluable.

I know that the federal government can come under attack and be subjected to many public complaints, but we find that we are able to work very closely with the Army Corps. It has been great to work with, and I think sometimes people forget the good things the federal government does. I want to recognize the Army Corps' efforts. It has significantly reduced flood risk and implemented infrastructure in our area that has protected us from many flood events.

Rick Johnson is the executive director of SAFCA. He can be reached at JohnsonR@SacCounty.net.

Building a Flood Control System for the 21st Century

Kando: Improving Wastewater Quality Before It Reaches the Treatment Plant