Impressive conservation achievements—along with innovations in energy use and long-term planning for future disruptions—have made Denver Water a two-time winner of the Sustainable Water Utility Management Award from the Association of Metropolitan Water Agencies (AMWA). In this interview, Denver Water CEO and Manager Jim Lochhead talks with us about how the agency seeks sustainability while providing water to the Denver metro region.

Jim Lochhead: I am the CEO of Denver Water. I’ve been with Denver Water since 2010. Before that, I was a lawyer doing water rights work for a variety of organizations, including states, municipalities, agricultural interests, and real estate development interests, and one of my clients was Denver Water. I also served for 4 years as the executive director of the Colorado Department of Natural Resources, so I’ve been in both government and the private sector throughout my career. I wanted to be at Denver Water because I love its sense of mission and purpose. We have 1,100 employees dedicated to providing a secure water supply for the Denver metropolitan area. It’s both a huge challenge and incredibly rewarding.

Jim Lochhead: Denver Water was created in 1918 under the Denver City charter. We’re a part of the City and County of Denver, but we’re a separate enterprise. I report to a five-member board appointed by the mayor. We were established to be apolitical and to be able to take a long-term perspective. We serve about 1.5 million customers, about half of whom are located in the city and county of Denver. The other half are in various municipalities in the suburbs of Denver. Our water supply comes solely from surface water— from snowpack and rain. We get about half our water supply from the Colorado River basin and the other half from the South Platte River basin. Our reach is extensive—we sit at the backbone of the Rocky Mountains and get water from both sides of the Continental Divide. Our watersheds cover about 4,000 square miles, an area about the size of the state of Delaware. We’re the third-largest public landowner in the state of Colorado.

Our reservoirs are used both for water service and recreation. They’re a big part of the economy. For example, Dillon Reservoir is located in Dillon and Silverthorne, right next to a bunch of ski areas. It’s a big economic driver of the local economy. We like to think of ourselves as more than simply a water utility. Our properties span the state as we engage in local communities. We’re part of the fabric of the community, and indeed, Denver and other western municipalities and cities wouldn’t exist but for Denver Water.

Municipal Water Leader: Denver Water’s service area has expanded dramatically since its creation. Do you expect that expansion to continue?

Jim Lochhead: Our service area is constrained under an agreement that we reached with western Colorado. Denver Water moves water from western Colorado into eastern Colorado, and as with Northern and Southern California, that importation of water creates tension between regions. In 2013, we entered into what was in essence a peace treaty with western Colorado, which resolved several issues and established a partnership. As part of that, Denver Water agreed not to expand our service area. We’re really growing up instead of out, which is a good thing from a sustainability perspective, both for the city and for the utility.

Jim Lochhead: It’s about conservation and efficiency. Denver Water has been engaged in encouraging conservation by our customers since at least 1938, when we experienced a major drought. Through those efforts, we have reduced our water use by more than 22 percent over the past 20 years. In fact, we are using about the same amount of water as we did in the 1970s, even though we have about 600,000 more people in our service area. Our customers are cognizant of how much water they use. We have a tiered rate structure, and we send educational materials to our customers. We work with customers on an individual basis to encourage efficiency, and it has really taken hold.

Jim Lochhead: We are just a drinking water utility. We do have a recycling treatment plant at which we take water from the Metro wastewater plant and retreat it; it is then used for irrigation and other industrial purposes throughout the system. We’re also partnering with storm water agencies and other agencies on green infrastructure projects. We are really moving toward the One Water concept that’s being embraced throughout the world, which envisions making full use of the urban water cycle, including treatment and storm water management, installing green infrastructure, and matching water quality to purpose.

Municipal Water Leader: Denver Water is a two-time winner of AMWA’s Sustainable Water Utility Management Award. What are the factors that go into receiving that award?

Jim Lochhead: This is the second time that Denver Water has received this honor. It’s a recognition by peer utilities of our efforts. It’s difficult to win it once, so to win it twice means that we have continued going above and beyond what we were doing when we first won it. Sustainability is a big part of what we do. As a water utility in the West, we are protective of our source water supply. For example, in a program called Forest to Faucets, we’re working with the U.S. Forest Service to perform forest thinning in national forests and key watersheds to reduce fuel and mitigate the effects of catastrophic wildfires, which will be exacerbated by climate change.

In addition to the AMWA sustainability award, we recently won an award from the Urban Land Institute for our brand-new, LEED Platinum–designated, net-zero-energy headquarters and operations complex. The 35‑acre campus houses our administration building, fleet operations, warehouse, meter shop, and various other operations. We completely redeveloped the site to reflect the future of water in the West. It incorporates rainwater capture and an in-building wastewater treatment system: We’re capturing wastewater in the building and using it for toilet flushing and irrigation. We’re using our own water supply for heat exchange instead of groundwater. The building reflects our sustainability ethic. We do a lot of work on climate change and energy efficiency. We generate a lot of hydropower, and we aim to be an overall net-zero water utility, meaning that we generate at least as much clean energy through hydropower as we use in all our operations. We also are in the process of constructing a new water treatment plant. We challenged the engineers to design a self-sustaining plant that could be operated off the electric grid. They thought we were crazy, but they went to work and developed a plant that is so efficient and generates so much energy that we are connected to the grid only because we’re selling power back to it.

Jim Lochhead: I serve on the board of AMWA. It is an organization that is designed for C‑suite utility executives. We have lots of programs that deal with operations and business excellence in water utility management. The organization also advocates in Washington, DC, on federal legislation and regulatory matters that affect drinking water.

Municipal Water Leader: What does the award mean to Denver Water?

Jim Lochhead: It’s important to be recognized by your peers. Our employees are extremely dedicated, and they are proud of the work they do every day to deliver water. Throughout the pandemic, we’ve had employees reporting to facilities every day; interfacing with the public; and working in the streets, replacing mains and repairing and building the system. That’s part of sustainability as well—the sustainability and resiliency of your people and their ability to meet challenges, both those we can anticipate and those we can’t.

Municipal Water Leader: How do you work with the state, federal, and local governments to further their objectives?

Jim Lochhead: Two years ago, we received approval from the U.S. Environmental Protection Agency (EPA) for a variance under the lead and copper rule. Through discussions with the EPA and the Colorado Department of Public Health and Environment, we received approval to remove 65,000– 85,000 lead service lines within our service area at no direct cost to our customers. We’re absorbing those costs. We can deal with lead service lines from a treatment standpoint, but the root cause of the problem is the lines themselves. The ultimate solution is just to get those lines out. We’re are working to remove every lead service line from our system over a 15‑year program timeline. We are now 2 years into that program, and we’ve removed over 10,000 lines so far.

We’ve also worked with environmental permitting agencies on the enlargement of the Gross Reservoir. The environmental approval process for that project—including steps dealing with the National Environmental Policy Act, the Clean Water Act, the Forest Service, the Federal Energy Regulatory Commission, and other federal agencies—has taken 20 years. Our focus through this entire process has been not just meeting regulatory requirements but undertaking environmental enhancements over and above those mitigation requirements. We do this by partnering with the local community and with nongovernmental organizations. We look forward to starting the construction of that project early next year.

Municipal Water Leader: What is Denver Water’s vision for the future?

Jim Lochhead: Well, the future is uncertain. We’ve learned that through climate change and the pandemic. We’re going to be seeing more severe weather events, longer droughts, more severe flooding, and a generally warmer climate. We will find out how that affects both our water supply and the demands on our system over the next 100 years, but we need to be able to meet those challenges. As a result, we have a 50‑year planning process in which we look at what we call scenario planning. We look at what the world might look like 50 years from now. It’s going to be full of disruptive change, and we need to be ready to meet any of the challenges that might be coming our way. Our readiness, resilience, and long-term view underpin our vision.

Jim Lochhead is the CEO and manager of Denver Water. For more on Denver Water, visit www.denverwater.org. 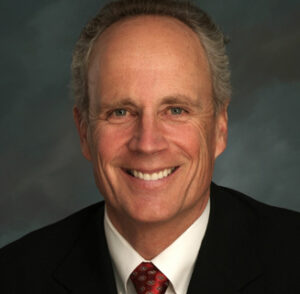