he Water Council is a Milwaukee-based nonprofit organization that drives economic, technology, and talent development to support the global water industry. For 12 years running, The Water Council has convened an annual Water Leaders Summit to bring water professionals and innovators together in an atmosphere of collegiality, creativity, and curiosity.

In this interview, Dean Amhaus, president and chief executive officer (CEO) of The Water Council, tells Municipal Water Leader Managing Editor Joshua Dill about this year’s Water Leaders Summit and why readers of this magazine should consider attending. 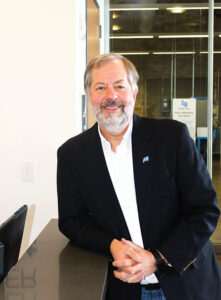 Joshua Dill: For readers who may not already know you, would you introduce yourself and your organization?

Dean Amhaus: I serve as president and CEO of The Water Council and was one of the individuals who helped found the whole organization. We are a water technology cluster or hub located in Milwaukee, Wisconsin. We’ve got almost 240 water technology companies within about a 11⁄2-hour drive— not only companies and universities, but also innovative, creative utilities that want to take novel approaches to water management. Our organization brings them all together and makes connections. We have a particular interest in helping small businesses to grow and develop.

Joshua Dill: Tell us about the Water Leaders Summit.

Dean Amhaus: The Water Leaders Summit is a yearly conference held in Milwaukee. We hold the event at the Harley-Davidson Museum and typically have around 300 attendees. This is our 12th summit. I can remember back when we held the first one—it was a 2-hour session with about 60 people in attendance. We asked, “Should we keep on meeting?” Twelve years later, we’re still meeting, and more importantly, we’re acting on growing our cluster.

It’s a different type of summit than it was when we started. We place an emphasis on conversations and bringing in thought leaders. We are trying to bring together people from outside the traditional water industry who have different approaches and ideas. Instead of straightforward presentations about “who we are and what we do,” what happens on the stage is more about people telling stories. Charles Fishman, the author of the award-winning bookThe Big Thirst, interviews each of the panelists ahead of the summit, and then leads a conversation with them on stage. It’s quite engaging for both the panelists and the audience. 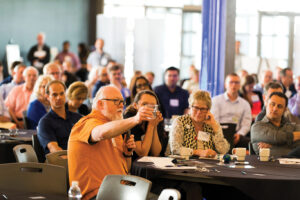 What we’ve focused on for the last couple of years is the broader spectrum of the water industry—both utilities and the large water users whom utilities supply. We’re engaging those companies to learn about their practices around water. This year, we’re also going to be starting to look at the financing of water projects, from infrastructure to technology. The sponsors of the 2019 Water Leaders Summit include Rexnord; the A. O. Smith Corporation; Badger Meter, Inc.; the University of Wisconsin–Milwaukee; Marquette University; MillerCoors; the Wisconsin Economic Development Corporation; and the Fund for Lake Michigan.

Joshua Dill: Who should consider coming to the Water Leaders Summit?

Dean Amhaus: None of the sessions are technical in nature, which means that the conference is of value to a wide variety of participants. For example, we have a partnership with Neroli Salon & Spa, Aveda Institute Madison, and the Institute of Beauty and Wellness here in Milwaukee. The institute’s students are raising scholarship funds for other students who are exploring projects or careers in water. As part of our relationship with the institute, we invite some of their students to come to the summit to expand their knowledge about the role of water in our communities. These are people who are on the front lines of water usage, given their jobs in the salons, so we want them to gather information and to broaden their awareness and knowledge. Then we also have the CEOs of corporations and water tech companies. We get large water users and utilities. We have international participants as well. We’ve got a delegation coming from Germany, and I also anticipate having participants from Denmark, Mexico, and the United Arab Emirates.

Joshua Dill: What do your attendees get out of the summit?

Dean Amhaus: One person at the 2018 summit said that they wrote down more notes during the summit than at any other conference they had ever attended. I think the primary reason for that is that we emphasize storytelling. People don’t remember litanies of factoids—they remember stories. I can’t remember a PowerPoint slide with a lot of numbers and charts, but I can remember a story I heard at last year’s summit told by a presenter from General Mills. He described how one of their yogurt facilities in China had had to toss out its entire inventory and be temporarily shut down because of water contamination. It cost the company millions of dollars, and the issue made it all the way up to the CEO. People remember stories, so that is what we aim to give to attendees.

Joshua Dill: What have been the results of the networking that goes on at your conference?

Dean Amhaus: Last year, we heard about people making connections and having dinner with each other after the sessions, so this year we’re looking into how we might facilitate even more engagement on the conference’s first day. We’re trying to create opportunities for dialogue. I know that at one of our past summit, two individuals who previously didn’t know each other happened to be seated across the table from each other and ended up doing business together. What goes on during the reception or in the hallway is just as important as what’s going on on stage.

Joshua Dill: You mentioned that financing is going to be one of the topics of this year’s summit. What are the new developments that the presenters are going to discuss?

Dean Amhaus: We are trying to get somebody to come in and talk about corporate governance, particularly about how large institutional investors are increasingly paying attention to a corporation’s water sustainability plan as a factor in determining its financial risk. We will also discuss the Alliance for Water Stewardship (AWS) and how this program can help corporations who are large water users. Somebody from Procter and Gamble will be there to talk about the company’s extensive involvement in AWS. Puon Penn from Wells Fargo will speak about his business’s investments into small businesses and entrepreneurs. He’s quite in tune with what’s going on in California with water trading, so he will also be discussing that.

Joshua Dill: If any of our readers is interested in taking part in the summit, what should they do?

Dean Amhaus: They should visit our website, thewatercouncil.com, where they can register and find more information about it. I would suggest that they register quickly, because we did sell out last year. Our summit happens at the same time as Milwaukee’s Summerfest music festival, which takes place just 10 minutes away, so hotel rooms will be going quickly as well. We encourage potential participants to register and book their hotels now. We can certainly help with that. We have hotel room blocks, but they do go quickly. We expect that the Water Leaders Summit is going to be sold out again.

Dean Amhaus is president and CEO of The Water Council. For more information about the Water Leaders Summit, please contact Taylor Baseheart at tbaseheart@thewatercouncil.com or at (414) 988-8932.