Gross Reservoir is a critical component in Denver Water’s North System. Completed in 1955, the original designers had envisioned the reservoir’s expansion as a way to keep up with demand. The current reservoir holds 42,000 acre-feet of water, impounded by a 340-foot concrete dam. Denver Water is in the process of raising Gross Dam by an additional 131 feet, making it 471 feet tall and increasing its storage capacity to 119,000 acre-feet.

Municipal Water Leader’s senior writer, John Crotty, spoke with Gross Reservoir Expansion Project Manager Jeff Martin about the logistics of storage expansion, the need for collaboration among stakeholders on the west and east slopes of the Rockies, and how process is as important as results when tackling big water projects.

John Crotty: Please provide some background on the expansion project and the needs the project will meet.

Jeff Martin: The dam’s original designers planned to raise the dam to keep up with water demands in two phases: the first adding an additional 40 feet, and the second, 80 feet. With that in mind, we are really just building off that original vision.

As we look at our system now, we need to pursue this expansion for a couple of reasons. One is increased demand due to Colorado’s growing population. The other is the need to improve system resilience. This is especially true for Gross because of the two watersheds that provide water to Denver.

Denver Water’s South System, which has been in operation for over 100 years, accounts for about 90 percent of the water we manage. With 90 percent of our water flowing through one corridor and the remaining 10 percent through our North System corridor, we began assessing what we would do if an event were to occur in the future that would exploit this imbalance. For example, Colorado’s largest wildfire, the 2002 Hayman Fire, caused a lot of destruction to the South System watershed. We look at events like this and try to make sure our systems are balanced so that we have the right resiliency to move forward.

We started the expansion right after the Hayman Fire. That year, a drought, in addition to the fire, caused us to almost run out of water on the North System, stressing its day-to-day operation. Although we had already identified the issue in our integrated resource plans, the problem really came to the forefront in 2002. Right after that, we started the NEPA [National Environmental Policy Act] process on the Gross Dam expansion.

We started the NEPA process in 2003, and it took 14 years to complete. We finally received our record of the decision in 2017 and obtained our 404 permit. Going through the NEPA process took a lot of patience and perseverance. We are really proud of the process and the environmental impact evaluation that took place.

In the beginning, the organization went into this process uncertain that the full expansion was going to be the final outcome. In fact, at one point we thought that two dams could be the solution. Through the process itself, it became evident that the larger expansion was the preferred choice due to its lower environmental impact. 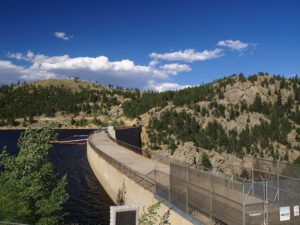 John Crotty: What are the next steps?

Jeff Martin: Two federal actions have to take place. The first is the U.S. Army Corps of Engineers 404-permitting process, which is complete. The second is a license amendment from the Federal Energy Regulatory Commission, which is required to give us approval to raise the dam.

With the 404-permitting process, we have had a big cultural shift. This process has taught us as an organization the value of cooperation and collaboration, which resulted in our accepting permitting conditions that will not just offset the environmental impacts but will result in a net environmental benefit for Colorado. Now, we are moving toward a culture of compliance to ensure that we are adhering to all the requirements within the permit itself. The next steps are working toward some of the mitigation projects that were identified in the 404 permit.

Additionally, we are in the final stages of design engineering, which is exciting for Denver Water. We have done a lot of preliminary studies to have a better idea of where we are going, and we now have the most qualified concrete dam designers on the team. Stantec is the engineering company doing that.

We want to be done by 2025. That means by 2019, we are going to start some site development work. We aim to start construction activities in 2021.

John Crotty: What are some of the mitigation projects that were identified in the permit?

Jeff Martin: There are so many to choose from, it’s hard to describe just a few. One example is our conveyance of more than 500 acres of diverse forest and wetland habitat to the U.S. Forest Service. We compensated for 2.5 acres of wetlands that will be inundated in the larger reservoir. We are also working on two stream restoration projects: the Williams Fork River, which is part of the Fraser and Upper Colorado River watersheds, and South Boulder Creek, on which Gross Dam sits. Our environmental reviews identified that the aquatic habitat in those streams has diminished mostly because the streams have grown wide instead of deep. These projects will fix that.

As we moved forward with this project, we entered into the Colorado River Cooperative Agreement with other stakeholders and water entities on both the west and east slopes of the Rockies. The agreement identified how we would move forward as responsive organizations in a collaborative environment that would help us look out for statewide interests and all the users on the Colorado River. From that agreement came a whole lot of projects and partnerships on the west slope, all together valued at more than $20 million.

We have also partnered with a couple of organizations on the South Boulder Creek watershed to create an environmental pool that provides an additional 5,000 acre-feet of storage that the cities of Boulder and Lafayette will let out of our dam during low flow periods to ensure that we keep some of the stream flows up in South Boulder Creek. Historically, the South Boulder Creek watershed can have low flows, affecting fisheries and aquatic resources in the late summer and fall months. Through this process, we are going to have available water to use during low-flow periods.

John Crotty: Did the partnerships require a change in organizational approach as the permitting process moved forward?

Jeff Martin: Yes. Our organization has definitely evolved throughout this process. Over the 14 years, we have really set forth a vision through the Colorado River Cooperative Agreement. That agreement signified a turning point for Denver Water to a belief that when we are working on a project such as this, it is not the end result that matters but how we get to the end result—the partnerships we make along the way. 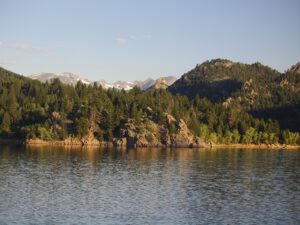 It’s been a big change for Denver Water as to how we do business. I think it’s the only way, in the end, that we were going to move forward on a project of this scale.

John Crotty: Given the complexity of all the partnerships and the permitting process, how do you finance a project?

Jeff Martin: There are a few tools we use to do that. First, let me explain how Denver Water works. We collect revenue through selling water, new tap fees, and the sale of hydropower, so we are not tax revenue based.

Denver Water is celebrating its formal 100th anniversary this year—the people of Denver voted to take ownership of the water utility in 1918. The infrastructure is aging and needs improvement, so we have a rather large capital improvement plan already in place to ensure we can provide a reliable water supply to our customers. In addition, we have some projects, such as the Gross Dam expansion, that address the future needs of Denver Water. We can adjust our rate schedule to be able to pay for these projects, as well as use other tools, such as bonding, to cover a lot of our overall capital programs.

Denver Water has a triple -A bond rating, which is the highest bond rating for a utility. We earned this rating largely because we have a really good track record of doing what we say we will do. That really helps our bonding effort. The primary funding source will be a 30 -year bond, which will level out the cost of the project but also will allow our future customers to buy in to the project as well. It does not just put the burden on our existing customers to provide a future benefit. The city of Arvada is also a project participant and will be contributing to the costs.

John Crotty: How do you explain the value and the investment of a project like this to your customer base?

Jeff Martin: A lot of our customer base has lived through droughts and periods of water restriction. Living in this area, the culture is pretty understanding that water resources aren’t a given in the West. Denver Water is a leader in educating our customers to understand that you should use only what you need and that we do not have an endless supply of resources.

One of the ways we have been a leader in this effort is by having one of the only recycled water treatment plants at a water utility. Although Denver Water is separate from the city’s wastewater treatment facility, our recycling plant takes water that has already been cleaned at the wastewater plant, so it is safe to reintroduce back into the environment, and cleans it one more time. The resulting recycled water is delivered to our customers for industrial purposes and irrigation. We really work to create a culture that understands that water is a resource that deserves to be cherished and valued.

John Crotty: Finally, what advice do you have for other managers interested in moving forward on a storage project like this?

Jeff Martin: Projects like this do not move forward unless an organization has a strong, authentic commitment to the environment and is a good steward of the resources that we are entrusted with. Apart from that, a project like this requires stakeholder collaboration. We understand that what we do has an effect not only on the environment, but also on the social realm around our watershed. As difficult as it was, our collaboration efforts have been beneficial not only for this project, but also for future relations and how we work with stakeholders throughout our region. We’re proud that this project will result in a net environmental benefit for the state.

At the end of the day, large infrastructure projects like this will not be judged on if and when they get done, but on how they are done.