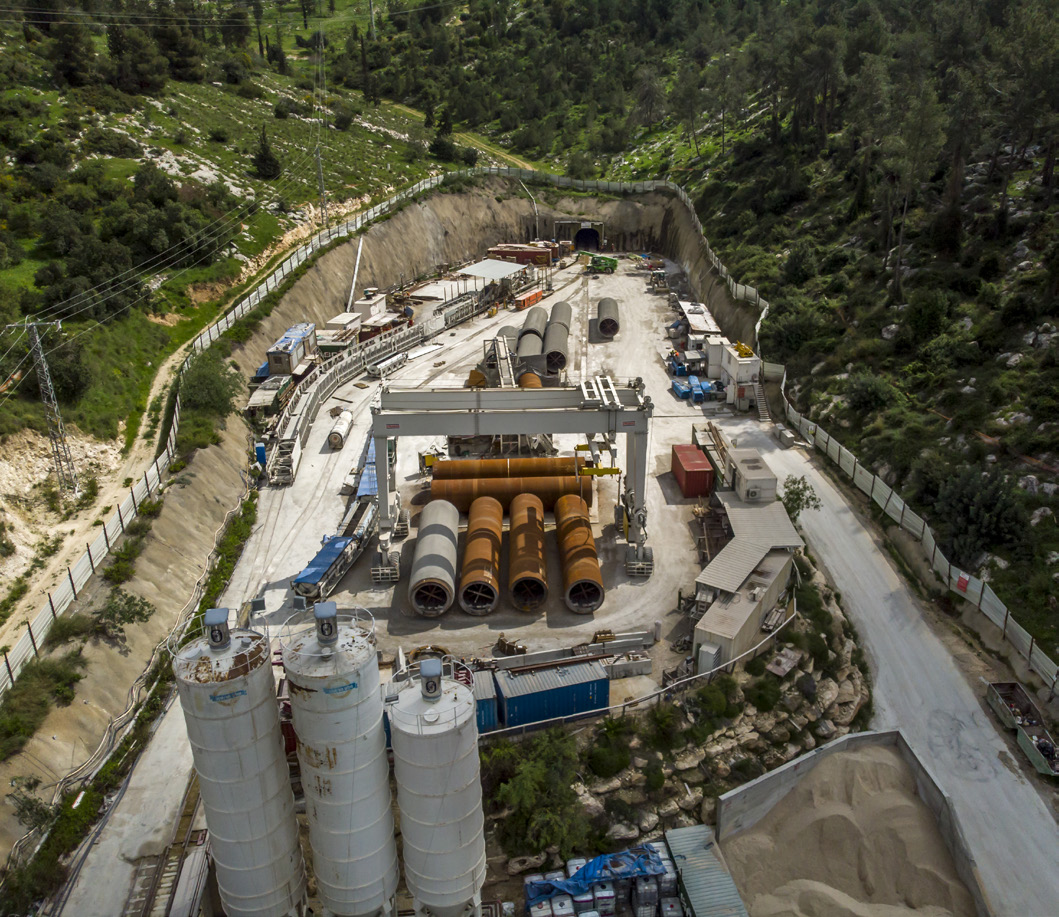 Due to population increase, the city of Jerusalem is reaching the limits of its current water supply. To resolve this issue, Israel’s national water company, Mekorot, is building a 25-mile pipeline, between 80 and 102 inches in diameter, to provide the city with water from both underground sources and desalination plants on the Mediterranean coast. As the water mostly comes from sea level and Jerusalem lies half a mile above sea level, the entire pipeline system must be pressurized at 290 to 580 pounds per square inch (psi) to deliver the water. This enormous project was first envisioned in the 1990s and is finally reaching completion, with the first water deliveries expected in 2021.

In this interview, Micky Elisha, the project manager for Mekorot’s pipeline project, tells Municipal Water Leader about the process of planning, designing, and constructing this vital piece of national infrastructure.

Micky Elisha: I’m a civil engineer and have worked for Mekorot, Israel’s national water company, since 2000. I was always attracted to huge infrastructure project companies, so Mekorot was a natural choice. Working for Mekorot over the years has been fascinating. Israel has long suffered from a lack of natural water sources and from drought. As Mekorot is the company responsible for water supply throughout the country, our main challenge was to face these problems on a national level, which we have been able to do thanks to our innovative and sophisticated solutions. I started off at Mekorot as a maintenance engineer for pipelines and buildings, later moving on to the project development division. At first, I worked on smaller projects, for example, building small pipes to supply water to small towns for local municipal consumption. I was then lucky enough to be appointed to manage the fifth pipeline project, which began in May 2009. The project is interesting from an engineering and technical perspective—it’s a vast project that involves transporting ground water and desalinated seawater to Jerusalem and the nearby cities. Mekorot has around 25 people working on the project.

Micky Elisha: Mekorot, Israel’s national water company, was established in 1937—before the birth of the State of Israel. Today, Mekorot employs 2,200 people in a variety of disciplines. Our revenue is US$1.6 billion per annum, and we invest over US$400 million per year on water infrastructure. The company is responsible for more than 85 percent of the potable water supply in Israel, and around 80 percent of our activities are focused on this. Throughout the years, Mekorot has built thousands of wells, several desalination plants, numerous pipelines, and many other water sources. We also take care of water security, water quality, water resources management, hydrology, and drillings. The other 20 percent of our activities relate to wastewater treatment and reclamation—we recycle wastewater and provide it to the agricultural sector.

Municipal Water Leader: When did it become clear that Jerusalem needed a new water pipeline?

Micky Elisha: We finished the fourth pipeline to Jerusalem and started operating it around 1984. Subsequently, in the early 1990s, there was a large wave of immigration of Jews from the former Soviet Union to Israel, accounting for a population increase of hundreds of thousands. It was obvious to Mekorot that this significant increase in population meant that we needed to start planning a fifth pipeline in order to meet the water demands of Jerusalem's increasing population.

Municipal Water Leader: Would you tell us about the planning process for the fifth pipeline?

Micky Elisha: The Israeli government announced the project in 2006 and declared it a National Project—a legal status that helped accelerate the statutory process. We were required to provide a master plan, which was facilitated by the support of the government. The governmental support was essential in light of the complex nature of the project: The fifth pipeline project covers a span of about 40 kilometers (km), or about 25 miles, and crosses various municipalities with different regulations. We began by preparing the master plan, and after its approval, we started preparing a detailed design. This process took approximately 2 years, which is considered relatively quick. In many cases, it can take around

10 years for a project of such magnitude to be approved.

Municipal Water Leader: How is the project structured?

Micky Elisha: The project has two main sections: west and east. The western section was executed in the cut-and-cover method and started to operate in 2014. The eastern section, which is now under performance, includes reservoirs, a 13 km (8-mile) tunnel, and pump stations.

As background on the hydraulic system, we have to remember that Jerusalem is about 860 meters (m) (2,821 feet) above sea level. The water that the pipeline will transport includes desalinated seawater, which originates at sea level. To pump the water uphill, there are pump stations in place every 200–250 m (656–820 feet) in elevation. The total quantity of water being pumped at the final stage will be 65,000 cubic meters (17.2 million gallons) per hour. We’ll be pumping for an operational average of 18 hours per day, meaning that the pipeline will be pumping an average of 1.17 million cubic meters (309 million gallons) per day to Jerusalem and nearby towns and cities, including some in the Palestinian Authority.

Municipal Water Leader: How does that amount compare to Jerusalem’s current water supply?

Micky Elisha: The current system in Jerusalem is reaching its full capacity of 420,000 cubic meters (around 111 million gallons) per day. The fifth pipeline is designed to supply water for the next 50 years, so it will not initially be working at full capacity. As things stand, we’ll be starting off at around half capacity. Every year, we will increase the supply according to consumption and demand.

Municipal Water Leader: What role does desalinated water play in this supply?

Micky Elisha: Close to 80 percent of the drinking water in Israel is desalinated seawater—one of the highest levels of any country in the world. Most of the time, this pipeline will indeed be delivering desalinated water. The remaining water will be sourced from groundwater.

Micky Elisha: Yes, the Jerusalem municipality is preparing for the upcoming increase in water supply and will build a new reservoir at the city’s border to absorb it. In addition, Jerusalem is also building a new pipeline to distribute the water within the city. Finally, as part of this project, Mekorot is building several large reservoirs near the pump stations. These reservoirs will boast a capacity of 30,000– 50,000 cubic meters (24–40.5 acre-feet) of storage. These storage facilities also allow Mekorot to operate the system more efficiently. Operating this pipeline consumes a lot of energy, so doing so more efficiently can save a lot of money. On the existing pipeline systems, for example, we pay more than 40 million shekels (around US$10 million) a year for electricity costs alone. Saving just 1 percent of the energy used in the operation of the pipeline will therefore lead to significant savings.

Municipal Water Leader: How much energy are you expecting to use on the completed pipeline?

Micky Elisha: Each pump station has 6–8 pump units that consume 7–8 kilowatts (kW) each. We are building huge power substations near each pump station that will supply close to 65 kW each.

Municipal Water Leader: What material is the pressure pipeline made of?

Micky Elisha: The inner liner of the tunnel consists of a 102-inch steel pipe that can withstand 40 bars (580 psi) of pressure. We used steel pipe because of the level of pressure. First, we excavated a tunnel with a diameter of 4 m (157.5 inches). Then we started the installation of a 2.6 m (102-inch) pipe. Following this, we grouted the gap between the steel pipe and the face of the tunnel— approximately 1½ m (59 inches)—with concrete.

Municipal Water Leader: When will the tunnel be completed?

Micky Elisha: We have just reached the end of the tunnel, and we recently held our breakthrough ceremony. It’s exciting for me personally because it marks the end of 3 years of challenging and interesting work.

Municipal Water Leader: When will the first deliveries of water begin?

Micky Elisha: We expect to begin to operate the system in August 2021. We need to keep to this deadline because Jerusalem is nearing the limits of its current water supply and there is no other backup.

Micky Elisha is the project manager of the fifth pipeline to Jerusalem. He can be contacted at melisha@mekorot.co.il.

The Central Role of the Israel Water Authority