The San Juan Water Commission (SJWC) delivers water from the Animas–La Plata (ALP) Project to 11 municipal water retailers in the northwestern corner of New Mexico. In this interview, Executive Director Aaron Chavez tells us about how the commission is addressing concerns related to drought, power costs, and endangered species and about his role as president of the Colorado River Water Users Association (CRWUA).

Aaron Chavez: I’ve been working for the SJWC for 21 years. I started straight out of college as the commission’s GIS coordinator. I progressed up the ladder and became involved with water rights, information technology, and webpage design. When I had been here for 14 years, the executive director retired, and I was hired as his replacement. I’ve been in this position for 7 years.

Municipal Water Leader: Please tell us about the SJWC’s history and current services.

Aaron Chavez: The SJWC was formed in 1986 through a State of New Mexico joint powers agreement. The commission’s member entities are the Cities of Aztec, Bloomfield, and Farmington; the San Juan County Rural Water Users Association; and San Juan County. The mission of the SJWC is to protect the use of the future and existing water rights and water resources of its members and of all the citizens of San Juan County. Our primary focus when we were formed was to build and fill the ALP Project for our member entities. Currently, we ensure that they receive raw water from the project, which they then treat and deliver to their customers. These days, we are also involved in addressing issues like water quality, endangered fish, and invasive species. Now, we are taking the lead on conservation projects and ensuring that our water from the ALP Project gets to the diversions that it needs to get to.

Municipal Water Leader: What infrastructure do you own and operate to carry those missions out?

Aaron Chavez: The ALP Project is an off-site, off-river reservoir located in Colorado with a capacity of about 123,000 acre-feet. We share it with other partners, including three tribes, the State of Colorado, conservancy districts, and other project sponsors. We have water rights to 20,800 acre-feet in the ALP Project and storage rights in Lake Nighthorse. We primarily take our ALP water from run-of-the-river instream flows. All the deliveries from the ALP Project are done through the natural river system; we do not own pipelines or diversion structures. As a project sponsor that paid its proportional share, we own a portion of the ALP Project through the Bureau of Reclamation.

Municipal Water Leader: Who are your immediate customers, and who are the end users of the water you deliver?

Aaron Chavez: We ensure that raw water is available to our 12 member entities. The end users are their customers.

Municipal Water Leader: How large is the SJWC?

Aaron Chavez: There are four of us on staff. We also have a five-member board composed of a commissioner and an alternate from each of the three cities, San Juan County, and the San Juan County Rural Water Users Association.

Municipal Water Leader: Are you funded by your members?

Aaron Chavez: We have taxing authority. We receive half a mill from property taxes collected in the county.

Municipal Water Leader: We understand you have had some changes over the past few years having to do with adjudications of water rights. Would you talk about that?

Municipal Water Leader: How is the SJWC being affected by drought today?

Aaron Chavez: Drought is our number 1 concern, as it is for everyone in the Southwest. Currently, our water supply is 100 percent full. However, we use Western Area Power Administration (WAPA) power to pump our water from the Animas River into the reservoir, so if Lake Powell drops below critical levels in the future and that affects WAPA power supplies, we will have to buy power on the open market and our costs will go up enormously.

Municipal Water Leader: Are the power rates you have to pay already going up?

Aaron Chavez: At this point, no, because the rates were locked in per our contract with WAPA. In the future, we can expect them to go up, but we don’t know what the price will be.

Municipal Water Leader: What are the SJWC’s other top issues today?

Aaron Chavez: Through the San Juan Basin Recovery Implementation Program, we are helping to ensure that endangered fish species are recovering. We represent the water development interests in that program, which is run by the U.S. Fish and Wildlife Service and Reclamation. The goal is to help the Colorado pikeminnow and the razorback sucker to recover. To achieve that, program partners are doing work such as creating habitat downstream, altering the streamflow to provide better habitat for the fish, and installing fish screens and diversion ladders. Our ongoing water development continues in compliance with the Endangered Species Act.

We don’t have any real concerns about the ALP Project. The ALP general manager does a great job and is taking care of the project’s maintenance and operations. Currently, the state is completing a 50‑year water plan, and we are looking into ensuring our system’s resiliency. We might want to look at additional storage and other resources within our county. Thinking outside the box, we are pursuing top-water banking. We are also focused on improving efficiency through things such as headgate repairs and ditch lining.

Municipal Water Leader: You are also the president of CRWUA. What does that entail?

Aaron Chavez: CRWUA is an organization made up of more than 1,000 members from the upper and lower Colorado River basins. Our annual December conference affords us the opportunity to come together to discuss a broad range of critical water issues, such as the Drought Contingency Plans, the 500+ Plan, Glen Canyon Dam operations for water year 2022, and the reconsultation of the 2007 Interim Guidelines. I was honored to be elected as CRWUA president, representing the State of New Mexico, for a 2‑year term. I have served this organization in multiple capacities for many years. To take on a leadership role during a megadrought, with all the current issues on the river, is daunting, but I am up for the challenge.

Municipal Water Leader: Is there anything you would like to add?

Aaron Chavez: I was just appointed to the New Mexico Interstate Stream Commission by the governor of New Mexico, Michelle Lujan Grisham. The commission oversees water issues and agreements with neighboring states. My role is to ensure that not only is the state protected but that our region is, too. I’m grateful to have been appointed. I feel like I can make a difference.

Aaron Chavez: My vision is to continue to tackle these big regional and national issues while paying attention to the everyday needs of the end users. In our discussions about the big issues affecting the upper and lower Colorado basins, we sometimes forget about the individuals who don’t have water at the tap. I want to make sure that every citizen in San Juan County and in the state of New Mexico has a reliable water supply.

Aaron Chavez is the executive director of the San Juan Water Commission and the president of the Colorado River Water Users Association. He can be contacted at sjwcoffice@sjwc.org. 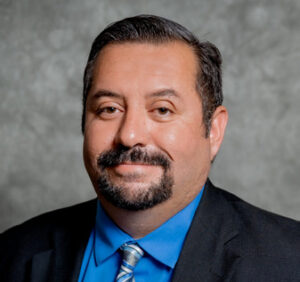