The Metropolitan Water District of Southern California is a state-established cooperative of 26 member agencies, including cities and public water agencies, that serve about 19 million people across 5,200 square miles stretching from Oxnard to San Diego. One of Metropolitan’s major sources of water is the Colorado River, water from which is conveyed to the Los Angeles area via a 242-mile aqueduct built by Metropolitan. As such, Metropolitan has a crucial interest in the future of the Colorado River, and it played a part in negotiating the recently executed drought contingency plan (DCP). In this interview, Jeffrey Kightlinger of Metropolitan speaks with Municipal Water Leader Editor-in-Chief Kris Polly about the implementation of the newly enacted DCP legislation and about what agreements will be necessary in future years.

Kris Polly: Would you please explain the significance of the DCP from Metropolitan’s point of view?

Jeffrey Kightlinger: We think it’s one of the more significant agreements we’ve made on the river. The last
20 years have seen a lot of progress with the basin states working together in a collaborative and cooperative manner. Of course, nothing sharpens people’s attention like a severe drought. Everyone knows we’ve been in a severe drought on the Colorado River, and we are beginning to understand that climate change and other demands are just exacerbating the effects of this long-term drought. We are perhaps not in crisis mode today, but we are close to it too close for comfort. Things have to be done and tough decisions have to be made. We started on this path in 2007 with the first shortage sharing guidelines on the river. It became pretty clear after 10 years that they simply weren’t robust enough to protect us from reaching crisis mode. I think it’s quite remarkable that the seven states and Mexico were able to get together and agree on voluntary restrictions. These were not imposed—the states agreed to them. They set aside water law, water rights, and priority systems, and thought about what they needed to do to protect the system. I think it’s a significant and remarkable achievement and a real demonstration of what we’re going to need to do in the future.

Kris Polly: With the passage of the DCP as a law and its signing by the states, what are the next steps?

Jeffrey Kightlinger: The agreements are already working as intended. One of the goals of the DCP was to encourage people to start storing water early, and a lot of that is taking place. We are fortunate enough to have good hydrology in the Colorado River basin this year, and you’re seeing people taking aggressive efforts to use the new agreements in the manner in which they were intended. Southern Nevada is storing water. The Central Arizona Project is storing water. Metropolitan is going to put probably close to 400,000 acre-feet of water into Lake Mead this year. By the end of 2019, we expect Metropolitan to have a million acre-feet in Lake Mead, which equates to about 12–13 feet. Southern Nevada and Arizona are going to add a significant amount of water to Lake Mead as well, about 200,000 acre-feet combined. People are taking advantage of the DCP immediately, which is good news for Lake Mead and the river.

We need to still work through some of the mechanics of the DCP. How do we most effectively use the new storage provisions? How do we coordinate interstate storage sharing provisions? The upper basin states are going to start working on their DCP and trying to store waterin Lake Powell, but there are challenges that have to be overcome before they can achieve that goal. There’s quite a bit of work for all of us to focus on for the next 12 months.

Starting in 2020, we need to start planning for the future beyond the DCP. It is only a short-term agreement; it just pushes us through the end of 2026. We need long- term guidelines to take its place starting in 2027. In this business, 6 years is not a long time. We need to figure out the mechanics of implementing and executing the current DCP and then immediately get to work on figuring out the long-term guidelines.

Kris Polly: How can the Colorado River system be made more sustainable?

Jeffrey Kightlinger: The lower basin states need to
deal with what our friends in Arizona like to call the structural deficit. We are 1 million acre-feet or more in the hole. We’re going to have to deal with that. Our hope is that there is a combination of demand-management and augmentation projects that can help us make up that deficit over the long term. The upper basin states have to work out how they can store water in Lake Powell and how they can develop conservation programs. They will need to figure out a way to track water conservation and use reduction and document that the water being put into Lake Powell is truly conserved water. We’ve developed those mechanisms in the lower basin; the upper basin is going to need to do that as well so that it can become truly sustainable.

Kris Polly: What is your message to your fellow river partners?

Jeffrey Kightlinger: We’ve done a great job working collaboratively to deal with a crisis. The next step is moving beyond that and truly making the river sustainable. It’s going to take a lot of interstate cooperation and possibly interstate programs. We have worked effectively on the pilot system-conservation projects that we’ve funded throughout the upper and lower basins. We need to put those programs on steroids. We’re going to need Congress to cooperate and help us with funding. We’re also going to have to step up and show that we can collaborate on reduction, augmentation, and interstate programs. Because the Colorado River is so important to the American Southwest, it’s our duty to make sure that it is sustainable in the face of long-term drought and climate change.

Kris Polly: What is your message to Congress about the DCP moving forward?

Jeffrey Kightlinger: We’ve shown that we can work on critically important issues in a bipartisan, cooperative,
and collaborative manner. We put aside litigation tools, we put aside priority systems and water rights, and we worked to find solutions that work for the greater good. We need Congress’s help in that. The Colorado River basin represents a significant amount of the nation’s GDP. Forty million people and over 4 million acres of farmland in the American Southwest rely on Colorado River water. It is in the national interest to work with us and to help us. Congress stepped up to the plate and passed the DCP in remarkably quick fashion, and the president signed it into law. We’re going to need that sort of attention and help as we move towards 2026 and beyond.

Kris Polly: Would you tell us about the process of negotiation that led to the DCP?

Jeffrey Kightlinger: Some people are saying that the DCP took too long—5 years of discussion. I actually think it came together quite quickly. After several years of preliminary discussions, most of the work to complete the DCP was done in 36 months. To put together something this complex—involving 10 tribes, 7 states, and 2 nations—in a 36-month period speaks to the level of cooperation and collaboration that’s been developed on the Colorado River since 2000. I think that bodes well for what we’re going to see in 2026.

Kris Polly: Would you like to say anything about the situation with the Salton Sea?

Jeffrey Kightlinger: At the eleventh hour, the Imperial Irrigation District (IID) determined that it would not be signing the DCP. It had been part of the negotiations throughout the process, but at the end, it decided that it would not be able to sign the DCP absent a federal funding commitment for the Salton Sea. We’ve carefully designed the DCP not to affect the Salton Sea, because we know of the significant environmental issues associated with it. IID has acknowledged that the DCP does not affect the sea, but nonetheless, it felt this was the appropriate time for federal funding for the sea and that it would not be able to execute the DCP absent that. 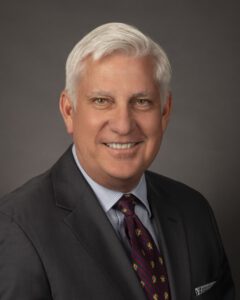 The Metropolitan board decided to step up and assume all of IID ’s obligations on behalf of California. When we did that, we told IID we supported their quest to get federal funding for the Salton Sea. We support action on the Salton Sea, but we felt the DCP was too important to wait for the resolution of the Salton Sea issue, which is progressing on its own parallel path. We felt we couldn’t wait any longer, and we moved forward. I believe that there are still opportunities to work with IID on the DCP going forward. IID will have to decide when it feels comfortable coming back to the table and working with the rest of the states.

Jeffrey Kightlinger is the general manager of Metropolitan Water District of Southern California. He can be contacted at officeofthegeneralmanager@mwdh2o.com.

Building Consensus in the Valley of the Sun